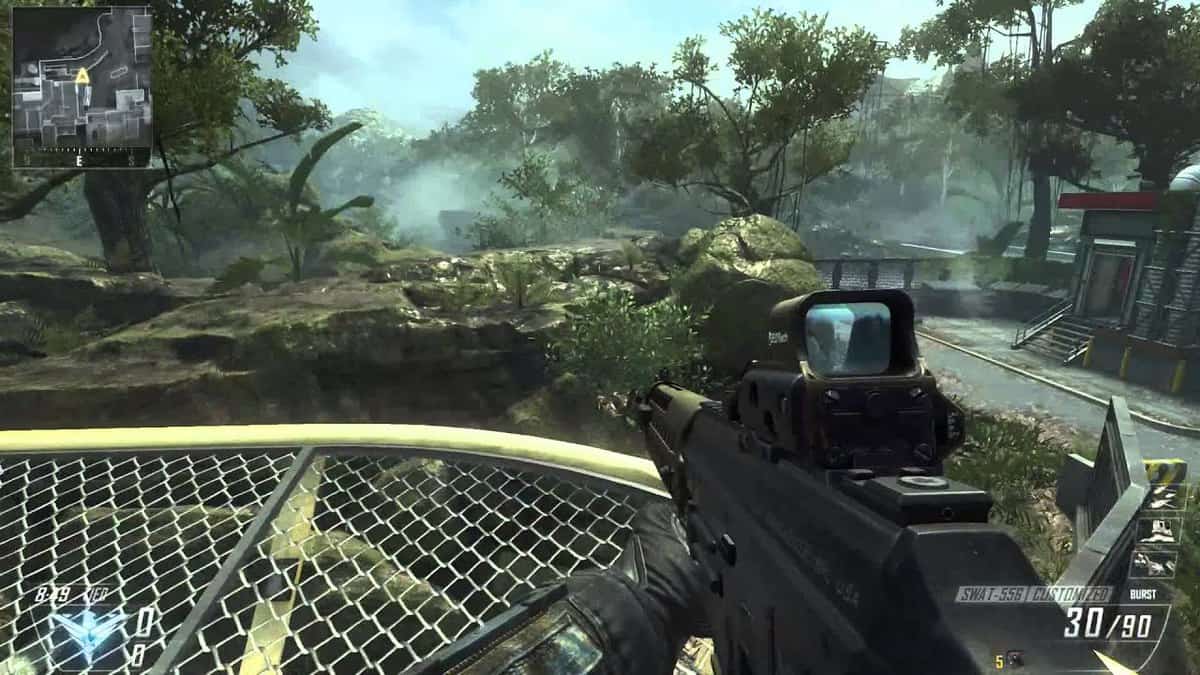 Turbine is a wind farm in the Yemen steppes, with a rocky and uneven terrain making up the battlefield. The setpiece of the map is a fallen turbine in the center of the valley, providing a massive obstruction perfect for taking cover. Read on for more in-depth Black Ops 2 Turbine Map Strategy.

Turbine is one of Black Ops 2’s largest maps, making it ideal for large team games. The rocks along the long path from west to east provide breaks in the path and sightlines, making travel sometimes linear and narrow. Because of this, the ends of the paths are ideal for campers to take pot shots, so make sure you stay alert at all times when taking these paths.

The center of the map yields a higher altitude on the north and south edges of the valley It’s a prime hiding spot for people looking to take advantage the action in the surrouding hotspots, as you can use the higher leverage to pick off people running around below.

Weapons
Due to the largeness of the map, long-range weapons can be particularly deadly. Because the sightlines are frequently broken up, however, there’s no shortage of CQC encounters. The latter happens more in objective modes that force player movement to specific areas, so choose your weapon wisely.

A combination of an AR with a Sight attachment and an SMG with Long Barrel can be a general way to tackle this map, though.

Hotspots
The southern hotspot is located a few feet north of the two obstructions in the southern-most center. The sightline to the east is wide open, but doesn’t stretch too far before narrowing out.

The west sightline is obstructed, as is the north and south, so a close-medium weapon should be you alley in this area. The center hotspot has the fallen turbine, which you can climb. Doing so, however, exposes you to fire from all sides, so know what you’re getting into.

The northern hotspot is a CQC area on the other side of the turbine. Rocky outcroppings contain this poisiton more than the other hotspots, and plenty of surrounding vantage points can turn the battlefield into a barell of fish, so watch your six.

Vantage Points
The southern portion of the map, behind the rocks surrounding the south hotspot, houses a vantage point with very long sight lines to the east and west.

An LMG or decent sniper can tear apart traffic from these areas, so stay alert. The west side of the map has a vantage point in the building overlooking the rocks. This position has a fairly long sight line, doubled in value by the respawn point nearby.

East adjacent, in the rocks between the underground path, is a position ideal for snipers. Enemies here will have their eyes trained toward the narrow path leading into the center hotspot, as well as on the respawn point direct west.

Overlooking the center hotspot is a vantage point with a good 180 degree view of the area north. It can be accessed by two jump points in its front, as well as by stairs in the back, so it’s easily succeptible to ambush.

Flag Routes
Traveling from east to west in Turbine can get confusing among the multiple narrow pathways. The road least travelled takes you along the outlying south regions of the map, with the potential to branch off around the rocky outcroppings to either flank or attach directly.

There are two options through the north: the first taking you through the path leading to the turbine and around the north or south sides of the rocks to flank or attach head-on. The second option is through the installation in the west aligned center at the northern-most region of the map.

Even the center path is not a direct one, as you must travel down several winding paths in order to come up on the flag at either the west or east end.

Lightweight and Extreme Conditioning or Dexterity are always good choices for the flag runner, as well as flashbangs, concussion grenades, and a lightweight weapon with a close range.

Watch out for flag defenders carrying AR’s with Sight and Extended Clip, as they can pick you off as you come around the narrow paths to take advantage of your close-range weapon limitations.

Demolition
The first bomb site can be found west of the southern hotspot, directly in front of the western-most outcropping.

The second bomb site is located in the north between the corner building and the fallen turbine. The overtime site is found in between the northern and center hotspots where the turbine splits. Ideal Loadout for planters include Flak Jacket, Tactical Mask, Smoke.

Those going for the second bomb site, as well as the overtime site, should equip themselves with SMGs to prepare for intense short-range combat. The first bomb site located in the south is fit more for close-medium to medium-long range weapons.

Domination
The first control point can be found in the easter section in the path leading from the fallen turbine. The second is found in the northern hotspot area by the downed turbine. The third is in the western section by the respawn point.

Assualting the flag in Turbine requires a small weapon with a very light Loadout for traversing the narrow paths with speed. Pointbreakers may find the full-auto AR with Target Finder or a Milimeter Scanner ideal. Beware of defenders utilizing LMGs or SRs.

Search and Destroy
The first bomb site is located west of the southern hotspot, north of the outcropping. The second is in the northern installation protruding westward from the map. The bomb is along the western equator next to the respawn point.

When on offense, take a Loadout utilizing Extreme Conditioning, or Engineer if the enemy is using heavy equipment. For your second Perk, use Toughness to give you an edge in close-range fire fights with an SMG or AR. Defenders can do well with the accuracy of the M8A1 with a Reflex Sight and Quickdraw.

The M8A1 takes more shots to kill at a distance, but it more than makes up for that in it’s almost zero recoil, accuracy, and mag size. Some good Perks include Hardline, Toughness, Engineer and Dead Silence.