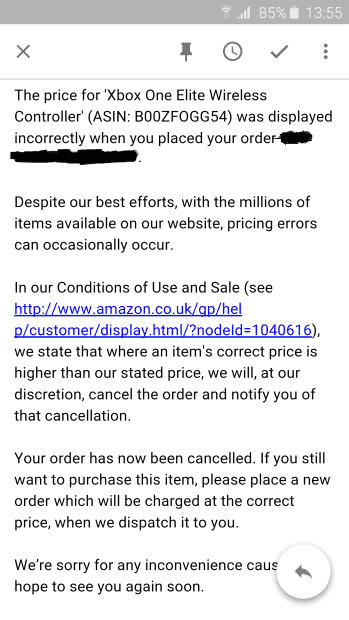 Microsoft recently announced the amazing Xbox Elite Controller which is expected to release in October. Users were excited to see such a cool gamepad, and took to different online retailers to pre-order the device. However, for some, that didn’t end too well.

Amazon listed the product with incorrect price, one that was lower than the actual price of the product. Fans saw the opportunity to grab the device for a cheaper price, and ordered it online from Amazon. However, when Amazon saw the error, it started to cancel pre-orders right away.

Amazon listed the controller for £75, but the actual price was around £119.

Amazon is a massive retailer and such errors occasionally happen. Still, I do feel bad for those who got their orders cancelled but there is a silver lining here though, Amazon is asking users to replace their order and those who do, will get a £10 discount.