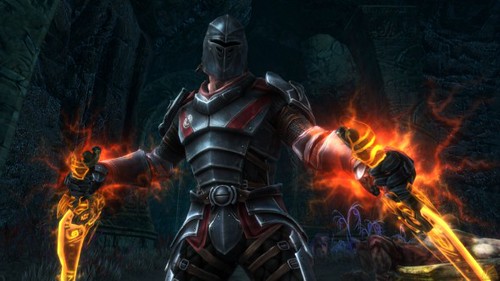 Launch day is always super-busy for developers and it doesn’t really help when your game goes buggy. So we decided to prepare a little Kingdoms of Amalur Reckoning Crashes and Error Fixes guide to help you.

Developers try to fix these issues by releasing the demo/beta and then acting upon the feedback received from the fans.

38 Studios did the same by releasing a demo for Kingdom of Amalur: Reckoning but still, there are few unresolved issues that need their attention.

I am sure they will try to resolve these issues today, but if you can’t play the game on the Day of Reckoning, you can refer to our troubleshooting guide for the workarounds.

1# Graphics Overhaul
Skyrim FXAA injector seem to work fine with Kingdom of Amalur: Reckoning so you can use it if you aren’t content with the graphics of the game.

2# Blackscreen Fix
If you get a black screen after character creation, you can fix it by disabling vertical-sync and post processing. If you don’t want to lose post-processing, you will have to force 2X AA to fix this issue.

3# Can’t login to EA Servers
Keep trying Origin is not known to handle heavy load. You can also delete the line ‘blaze_email=xxxxxxxx’ in your My Documents/Reckoning/personal.ini and re-launch the game to fix it. It worked in demo, hopefully will work in full-game.

4# Remapping Controls, Binding Keys, Mouse Wheel Fix and More
Samades has developed an application that enables you to remap controls, bind keys, fixes mouse scroll button and make macros for different abilities. You can download the latest version from here and follow the development in this thread.

5# Textures Fix
Adjust texture LOD, for which you will have to install RadeonPro, and create a profile on it for Kingdoms of Amalur: Reckoning. Once you’re done, open the Advanced tab and check Texture LOD. After this, set the slider between -1 and -2. Though the recommended value for this is -1

6# 3D Vision Fix
If you are experience any issue with getting 3D to work in Kingdom of Amalur, you can follow this thread on Nvidia for a comprehensive list of fixes. The discussion is on the third page of this thread as of writing this article.

7# How to get access to The House of Valor Quest
You can unlock this quest by entering the online pass included in the game. PC players will also receive the same quest regardless of the digital retailer they bought the game from.

Once you have activated the code, you can find the House of Valor by exploring the eastern end of the Alserund area, in Detyre.

8# Reckoning D3DX9_30.DLL Error
You can fix this error by downloading the latest version of DirectX 9. You can download it from Microsoft site here.

9# Kingdom of Amalur Reckoning Crash Fix
If you are experiencing any random crashes to desktop – you can download and install the new optimized drivers released by your hardware manufacturer (Graphics Card).

Nvidia has already released Reckoning Optimized drivers so if you are using Nvidia video card, you should check them out.

10# Reckoning Freezes
You may experience random freezes on Xbox 360 – installing on hard drive helps. If the issue persists and happens more frequently, create a new character and try again – It can happen due to bugged character World.

11# Stuck in Reckoning Mode
If you get stuck in reckoning mode, enable tutorial to fix the issue.

12# Quest Log Freezes/ How to Get Back on the Screen
If you get stuck on the log and want to get back to the game without losing your current progress then you should press # key.

13# Can’t Move After Character Creation in Reckoning
If the issue is not with your hardware then create a new profile (start a new game) to see if things go right. I will also recommend you to restart your PC before playing the game again and see if any updates can fix the issue for you.

14# Game Keeps on Freezing on Xbox 360
Turning off autosave can fix the issue for you. Otherwise, you will have to rely on the developers to notice the issue and release a patch to fix it.

15# PS3 Sound Issue/ Sound Keeps on Lagging
The issue is faced by many users so it’s safe to say that the problem might be due to some buggy code, which will most probably fixed in the next patch.

16# PC Weapons and Armor Bundle DLC not Appearing in the Game
Restart the game and your Origin client to fix the issue.

17# The Game gets stuck in Reckoning Mode
Enabling the tutorials can fix your problem. Worked for others, can work for you.

18# Reckoning Crashes On Certain In-Game Resolution
This can be due to the conflict between your in-game resolution and that of your desktop. Keep both the resolutions same to fix the issue.

19# Can’t See the Mouse Cursor
Unplug any USB controller connected to your PC to resolve this issue.

20# The Game is Stuck at Update/Origin Keeps on Updating
The problem can be due to multiple reasons. You can resolve the issue by hit and trial, your best bet is to uninstall the game and Origin. Re-download it and try again.

21# Crash after 10 to 15 minutes on Windows 10
This is caused due to some interaction with a version of XAudio2_7.dll, and the on-screen keyboard service.

Hit Win+R and type in msinfo32 and press enter. In Software Environment\Windows Error Reporting, you will have to search for any entries that include Reckoning.exe and check if the faulty module is XAudio2_7.dll.

To fix it, go ahead and stop the TabTip.exe process. Simply, you can create a batch command in order to run the game.

Though if you’re using the Steam version, set Steam Input (game’s properties) to Forced On, and it might fix the issue for you.

If you come across any other issues, let us know in comments and we will try to help you out.