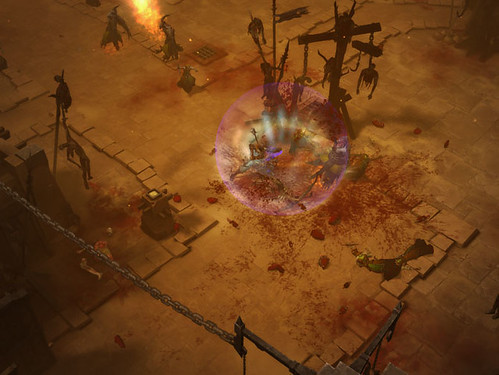 In Diablo 3, the monstrous creatures have some traits that can be really annoying if you aren’t aware of them. These traits in some cases are also used by the dominions spawned with the monsters.

Each trait can be used after a particular level and has different effects. Continue reading for run-down of all monster traits in Diablo 3 to prepare yourself for the battle that awaits you.

For more help on Diablo 3, read our Items, Crafting and Item Sets Guide.

Arcane Enchanted
Level 31
Damage Type: Arcane
If a monster is imbued with Arcane Enchanted trait, they will be able to use glowing orbs that take some seconds to fully form and once done they are turned into rotating beams also known as Arcane Sentries which can cause some serious arcane damage. This trait is very powerful and causes a lot of damage when paired with Vortex or an area with a bit of space to maneuver.

Avenger
Level 51
This trait is Champion monster specific. On the arrival of a monster with this trait, the death of group member will give some extra power to the remaining monsters.

Desecrator
Level 22
Damage Type:  Physical
This trait is available only to rare and champion monster specific and it will create some sort of black hole under the marked target. Any hero that comes in contact with this zone will deal some damage. This damage doubles after each 0.5 seconds that a hero will stay in there.

Electrified
Level 26
Damage Type: Lightning
The Lightning abilities of the monster (both attacking and defensive) are increased. The monsters with this ability also get an extra Lightening ability. When you strike these monsters they will unleash multiple lighting sparks that deal minute damage.

Fast
Level 31
The speed of movement, attack and casting is increased by 40 percent and 20 percent and 10 percent respectively. They are very good at chasing wounded heroes and maneuvering around the battlefield.

Fire Chains
Level 31
At the back of the monsters, there will be a burning chain and the hero who touches (getting close it can also be troublesome) it will receive some damage.

Frozen
Level 22
Damage Type: Cold
These monsters can place six bombs that are frozen and wired to explode after 4 seconds. The monsters with this trait have the ability to inflict cold damage and have extra resistance to cold. With their special cold attacks, they can slow down a hero or even freeze him.

Frozen Pulse
Damage Type: Cold
A crystalline globe of ice is used by these monsters that follow the player and deal cold damage

Health Link
Level 51
The trait will be effective when there are multiple champions present around. By linking to each other’s HP, the Health Link reduces the damage taken by the Champion by dividing it among other champions nearby.

Horde
Level 31
The trait is limited for Rare monsters only. It actually allows a monster to spawn with more dominions. Its affect increases when paired with Arcane Enchanted or Frozen leaving the hero stranded and no space to fight in.

Illusionist
Level 26
The illusionist trait lets the monsters create clones. The HP of each clone is same as the original one. These clones however cannot create clones further. It does not grant any extra resistance or damage to the monster. The clones have 5% of the total health of the monster and they cannot make use of skills like Fire Chain or Health Link. IF you kill the monster, you kill all the illusions.

Invulnerable Minions
Level 51
These rare monsters (exclusive) will spawn dominions which can do more damage than the regular ones. The health of the monster is increased by 50% and you don’t have a chance to kill the minions till you have dealt with the monster.

Jailer
Level 51
The hero can be trapped in a prison through this trait. Dashing strike however, will let you move. And the use of Spirit Walk can set you free. The damage of this imprisonment increases as the difficulty increases. These monsters are capable of trapping every enemy within a 60 yard radius.

Knockback
Level 0
With each melee hit, there is a chance that the hero gets knocked back and slowed down for a period of 3 seconds while dealing no extra damage. However this can also backfire on the monster making you safe from the monsters range of attack.

Missile Dampening
Level 8
The rare monsters with this trait can create a circle around a particular area and each projectile entering that radius will automatically be slowed down (90% slower) but the damage from these projectiles remains the same if successfully hit.

Molten
Level 8
The molten trait grants multiple abilities to the monsters. They get fire resistance and extra damage to their fire attacks. A couple of extra fire attacks are granted to them. When these monsters move puddles of lava are left behind which can cause very high damage for 4 seconds and when they die, they will explode doing damage to the ones in the surrounding which can even kill a moderately geared player in a single hit.

Mortar
Level 22
This trait let the monster target firebombs to the hero in 5 seconds interval. It will keep throwing the the bombs until it dies. These firebombs have a short range and the impact zone is visible before the actual strike.

Nightmarish
Level 1
The rare monsters and their dominions can have this trait which actually makes the attacks Fearful. Your character can be feel the nightmares of terror. Upon successful attacks, it can send the hero taking off in fear and without an impairing effect, this will last 3 seconds.

Plagued
Level 14
The monster with this trait can inflict poison damage and gets the resistance against the poison. It also provides three special poison attacks to the monster.

The poison pools go away after a while or when you kill the monster that created it. The damage from these pool increases as you stay in them.

Poison Enchanted
Level 1
Every monster can have this trait except the rare minions and the ones that have it can summon several acidic slimes at once which will take three seconds to spread out and leave behind X shaped poison which can cause a lot of damage.

Reflects Damage
Level 26
The damage dealt to the monsters that have this trait is returned back to you using projectiles. The monster will however receive damage but return the exact same amount back.

Shielding
Level 22
For a brief duration, the monster becomes invincible to any kind of damage.

Teleporter
Level 0
The trait lets a monster to teleport across the battlefield which can be quite useful specially when the monster is receiving some heavy beating.

Thunderstorm
Level 1
These monsters can summon a thunderstorm periodically and hit the player repeatedly, dealing lighting damage. You will be able to get out of its attack range as they are slow

Thorns
Level 26
Monsters imbued with this trait when are attacked with melee attacks, the attackers suffer some melee damage.

Vampiric
Level ?
Just like Vampire suck blood, the monsters with this trait can utilize the damage caused to you by changing it to to HP.

Vortex
Level 8
The trait lets the monsters to draw their enemies in for close quarters combat but not through walls or any such obstacles while dealing a bit of damage that you cannot avoid.

Waller
Level 8
The monster with this trait can spawn impenetrable barriers on the ground for a short duration of 6 seconds that are able to block almost every ranged attacks. These monsters will try to trap you in a walled prison in a triangle like shape. A leader monster can summon 3 walls together leaving only one side open where the monster itself is giving it the ability to deal a lot of damage.

Wormhole
Level 1
Two columns of arcane energy can be created by these monsters that can deal little arcane damage to the players stepping in them. One of them will mostly be summoned under your feet. You can use these columns to your advantage as well while fighting as they can backfire on the monster.