Nioh 2 Palace of the Damned Walkthrough 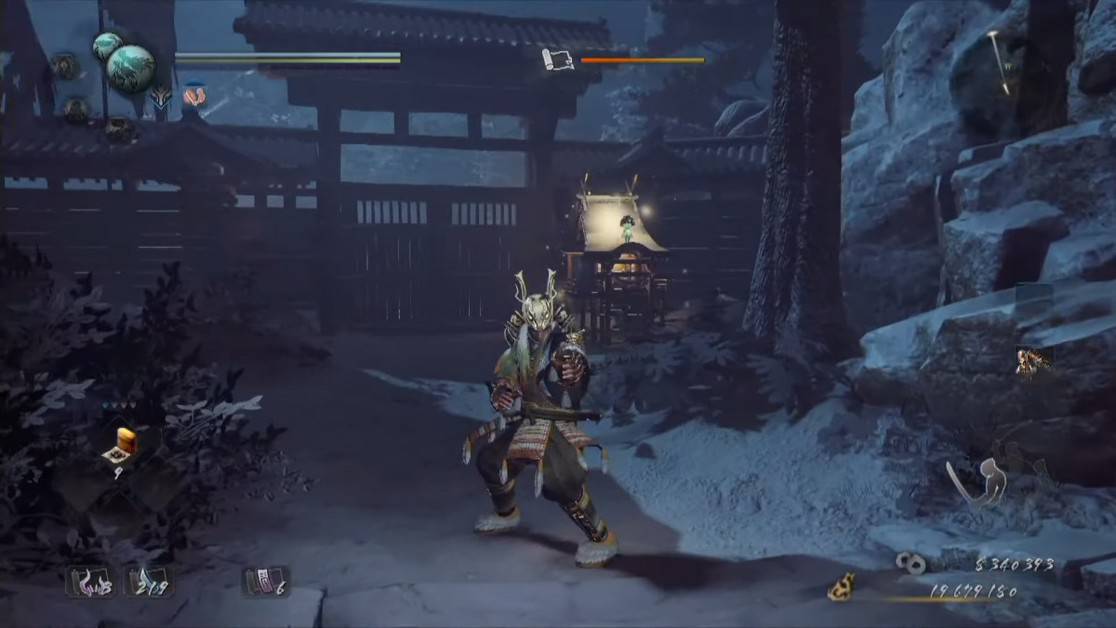 This guide will cover a walkthrough for the third story mission Palace of the Damned of Darkness in the Capital DLC in Nioh 2 and provide tips and tricks on how to defeat the boss fights.

Nioh 2 Palace of the Damned

Palace of the Damned is recommended for players with level 134 or above and has a difficulty of level 3. You will face both human and yokai enemies.

Start off your mission by collecting your first Kodama by going backwards from where you spawn. You will find the Kodama behind a big rock and a tree.

Now go straight to where the two NPCs are standing. You can speak to them or just keep going straight.

Interact with the shrine to change Guardian Spirit or use your Amrita to unlock stats if you want to.

You will find a Kodama behind the rocks. Go left from where you found the Kodama and slay the enemy.

There is a bridge on the left side that opens up a shortcut path for you if you die. You will have to face a yokai named Oboroguruma to open up this path.

Oboroguruma is a deadly enemy in the form of an Ox carriage. It lunges forward to attack who stands in its path and uses strips as a hand to grab the enemy and chew it.

Defeating the Oboroguruma will drop you rewards and open the shortcut path.

Keep moving forward until you find a bonfire on the right. Kill the two enemies on the ground and use arrows to take down the enemy with a crossbow on top.

Light up the bonfire. Grab the loot from inside the cabin in front of the bonfire and follow the path upwards.

You can open the door and go inside or take the path on your right to where the Ninja Locks are.

When inside the castle, go to your left and climb up the ladder. Follow the path and go to the balcony on your right. You will find a Kodama there.

Now drop down the ladder and go straight into the open area. Use the path going upward and go to your right. Light up the bonfire there.

Drop down the hole and get rid of all of the yokai enemies there. Grab the loot and use the shrine.

Open the door and take the path that goes upward. Kill the Fox Spirit and drop down to face another yokai.

Go back to where you killed Fox Spirit and go straight. Make a right and follow the path until you face Oboroguruma.

Open the door on your right for a shortcut path. Keep going on the same path and open the door that leads to your first boss fight for this mission. You will face White Tiger in this fight.

Ashiya Doman will turn your Nekomata into a vicious beast that you will now have to face. The main weakness of the White Tiger is its agility.

When the battle starts, use Spider Slow to stuck him in an area. Going behind it will make you vulnerable to his Tail Slam.

It can also glide in the air and throw an explosive projectile on the ground.

When in the Dark Realm, it also shoots a laser beam from its eyes and swings his head from sidewards. You can dodge the laser by dodging towards the direction it’s coming from.

Any of his attacks other than the Lunge Attack cannot be blocked.

Keep slowing it down and dodge when he attacks. Using these tips, you can easily beat the White Tiger.

Abe no Seimei and Minamoto no Yorimitsu will now join you. Make your way towards the path and go left from where the shrine is.

Go right from where the path ends and jump down. There is a Kodama in the area. Standing in the red pool will light you on fire, so stay away from it.

Make your way towards the path leading towards the top and turn left. Interact with the big log and keep going to the path where you were going before turning left.

Jump down and go left. Open the door and light up the bonfire in the middle of the room.

Go inside the arena and light the second bonfire placed in the corner.

You will face some Yokai enemies, but the bonfire will aid you in dealing with extra damage. Go inside the room where stairs are leading downwards.

There is a Kodama placed in the junk. Go back to where you came from and open the door on the right of the bonfire. Head straight and turn right to open the shortcut path.

Go back on the path and keep going straight. Drop down and pick up the Kodama. Now follow the path and interact with the log on your left to open up the shortcut path.

Before you enter the room, go to the left of the building and up to the top. You will find a bonfire that you can light up for achievement.

Go back and slay the Yokai beast. Once it is beaten, open the door and go past the shrine.

On the right will be your last Kodama for this mission. Run straight ahead for the final boss fight.

Ashiya Doman and The Lightning God of Yomi

You will face Ashiya Doman in this boss fight. He uses ranged attacks most of the time. The best trick for this fight is to keep him within range and do not give him enough time to use his attacks.

Keep spamming the attack button, and the first part of the fight will be over within a few minutes.

Once defeated, Ashiya Doman will transform into his ultimate form, the Lightning God of Yomi. He can teleport to a random spot and leave a trail of lightning.

Move out of his way whenever he’s about to shoot a lightning attack and land your shots for the short seconds that you get after his attack. Slowing it down will also work well.

The key to this fight will be patience. Dodge when he’s about to conjure lightning on you and stay away from him.

Only attack when you get the chance to. Do not rush your attacks and wait for the right opportunity.

Defeating him will mark the end of Palace of the Damned mission of Nioh 2 and you will be awarded 37,000 Gold, 116776 Amrita, Tsuchigumo Robes, Tsuchigumo Faceguard, Large Tsuchigumo Claw, and Frost Blossom Clawed Fists.