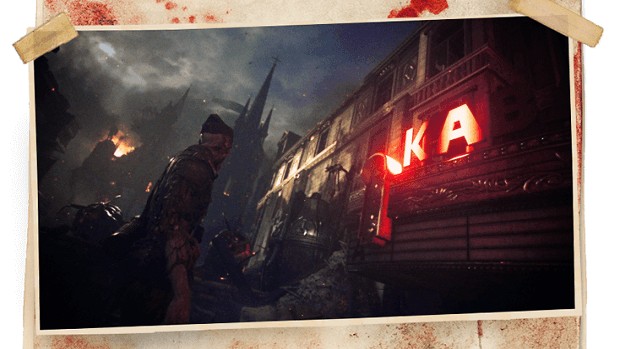 Before we start, do note that unlocking Pack-a-Punch is not a required step for this Easter Egg. However, you can do so in order to acquire powerful weapons. You can check out our detailed guide by heading over to the link.

The first thing that you need to do is to find the radio on the Main Street. Once you have acquired the radio, be sure to note down its model number. It can be something like ZX2, TX1, RS3, etc. After that, you need to head towards the Church where you will come across a map and a chart detailing a whole lot of areas and coordinates. This is where the radio’s model number that you noted down earlier comes in.

First, you need to note that area that is marked on the map with a red pin. Once you have done that, you need to find both the area name (from the second chart) and radio series (that you noted down earlier) on the first chart. We are doing all this in order to find the frequency that we need to set our radio to – allowing us to talk to Russians.

Let us assume that we found red pin on Dahme-Spreewald and our radio series is TX1 (do note that this changes every time you play). Therefore, the frequency that we need to set our radio to is 74.3; 90.0. Successfully doing so will allow you to listen to an audio log from Mikhail.

#2 – Finding and Shooting the Flares

The next step involves finding and shooting flares in order to signal your allies. In order to do so, you need to head towards a deceased NPC (with a burning flare nearby) right outside the Museum. You should also see a locked box containing flares nearby. At this point, you need to melee the locked box to open it up and reveal the flares.

After that, melee/shoot the box once again to fire a flare. Successfully doing this step will cause Fire the Flare appear on your screen followed by an audio log from Straub. This will allow you to summon the Russians and cause a Zeppelin to fly over and release a total of four anchors.

With the Wunderbuss at your disposal, shoot the gate mechanism to open the caged room.

#4 – Finding and Charging the Anchors

During #2, we saw a Zeppelin drop four anchors on the map. This step basically requires you to find and charge all three of them. The first one is located inside the Plaza, near the locked box containing the flares. Once you are there, kill zombies in anchor’s close vicinity to charge it up.

Once the Plaza’s anchor has been fully charged, you will listen to another audio log. From there, find two more anchors in the Museum and in the Destroyed Building respectively. However, for these two anchors, you do not need to kill zombies and can simply use your Wunderbuss Wonder Weapon (acquired during #3) to charge them.

Do not worry about the fourth anchor. We will access it later down the Easter Egg.

#5 – Finding the Painting and Revealing the Map

For this step, you need to head to the bedroom with the dead woman to find a painting on the wall. You need to find the painting by interacting with the picture placed on the dresser.

After that, charge the projector using primary fire from your Wunderbuss Wonder Weapon. Successfully doing so will allow you to see a map of the sewer on the stage.

#6 – Finding and Arming the Smuggler

For this step, you need to head over to the gated area (from where you acquired the Wunderbuss Wonder Weapon) and use the Wunderbuss to shoot the Cash Register in the area. Doing so will allow you to uncover a picture with numbers underneath. Like #1, these numbers also represent the frequency that you need to set the radio (in the Main Street) to.

After noting down the numbers from the pictures, proceed towards the radio in the Main Street and set the frequency to trigger an audio log. Once done, head towards the Plaza and locate a panel with GAS written on it on the ground – near the BAR Wallbuy. You basically need to shoot the panel or toss a Frag Grenade on it to trigger another audio log.

In order to complete this step, you need to arm the Smugger with a Bullet Weapon i.e. any LMG, Shotgun, SMG, etc. To arm the Smuggler, interact with the panel. A notification reading Armed the Smuggler signifies the completion of this step. Currently, there is no information as to which weapons the Smuggler prefers. Continue to provide him with different bullet-based weapons until you are successful.

After the previous step, you need to complete two rounds. Head to the Theater near the burning and melee the GAS panel on the ground in order to open it up. You can also try to lure a Bomber onto the panel and explode it there to trigger an audio log from the Smuggler.

Once you are done, you need to throw some Jolts into the hole until a notification reads Paid the Smuggler. At this point, the Smuggler will mention something about knocking three times at its apartment. In order to do this, you need to return to the caged area (where you acquired the Wunderbuss Wonder Weapon) and melee the wooden door three times.

The wooden door is located near the gate mechanism with some broken bottles on the ground. After the door opens, you will find the Smuggler’s Bat along with a notification reading Found the Smuggler’s Bat. There is also a chance of finding a dead Wüstling in the area.

Once you are done, you need to head over to the Apartments and find the safe near the Dancer’s Bedroom. It is important to note that the number of kills it took you to kill one Clown Doll is the safe combination and the area number where you killed is the order.

Successfully doing so should pop open the safe, revealing the Dancer’s Dagger.

For this step, you need to find the correct radio frequency (found in one of three possible places). These places include the Museum’s wall (directly below the M1 Garand wallbuy), Apartment’s elevator, and back-right area of the stage in the Theater (check the side of the dresser).

Your translated Morse Code should be some numbers which you need to enter on the map inside the Church to open up a cupboard on the right-hand side, containing the Scale Bowl. Now head to the top of the stairs inside the Museum and place the Scale Bowl on the scale there. To proceed further, you need to acquire the head of a Sizzler by bringing it to an Armor Machine and killing it.

Once you have acquired the head, you need to place it in the Scale Bowl and activate the scale. Successfully doing so will allow you to see a notification reading Balanced the Scale. You should also be able to see a rabbit located near the right-hand side of the scale. You basically need to accumulate some kills near the rabbit to cause a drawer from the scale table to open – containing the Nazi Axe.

#10 – Accessing the Hidden Courtyard and Charging the Final Anchor

In order to open the door leading to the Hidden Courtyard, you need to head to the outside of the Church, near the gate and place all three melee weapons (Nazi Axe, Smuggler’s Bat, Dancer’s Dagger) onto their respective spots on the wall. Once done, you need to charge the weapons.

After that, you need to place the golden ravens on the base of Barbarossa’s statue in specific positions. Try to go with hit and trial method until you see an on-screen notification reading Collected the Ravens. From there, you need to collect the blade from the base of the statue and place it at the specific slot at the gate to open it.

#12 – Boarding the Zeppelin and Defeating Straub

Remember that zeppelin that spawned during #2? It is time to board it. Collect everything you need to and proceed towards the anchor with a red glow inside. What you need to do is to shoot the red ceiling (using the Wunderbuss Wonder Weapon) until you are propelled towards the zeppelin and an on-screen notification reads Boarded the Zeppelin. It is important that all players shoot the red glow with the Wunderbuss at the same time.

Once you are inside the zeppelin, you will be required to use fuses, control panels, etc. to open the gates. Eventually, you will see Straub get overrun by zombies and an on-screen notification reading Defeated Straub.

You need to head back towards the anchor from where you boarded the zeppelin to begin a final encounter with Stadtjäger. When it comes to the battle with Stadtjäger, there are a few key points to remember. First, try to see if Stadtjäger has its head/chest glowing while charging – go in and attack during this time.

After a while, Stadtjäger will stop taking damage while charging. If that happens, try to see when it fires Geistbolts. Whenever you see it doing that, try to deal some damage.

Finally, whenever you see it emit some sort of red smoke, use your Wunderbuss Wonder Weapon to deal damage to it. It is important to use the Wunderbuss because it will not take damage from normal weapons during the red smoke phase. If you did everything correctly, Stadtjäger will fall down and you will be able to see the final cutscene.

This is all we have in our Call of Duty: WWII Zombies Shadowed Throne Easter Egg Guide. If there is anything else that you would like to add, let us know in the comments section below!