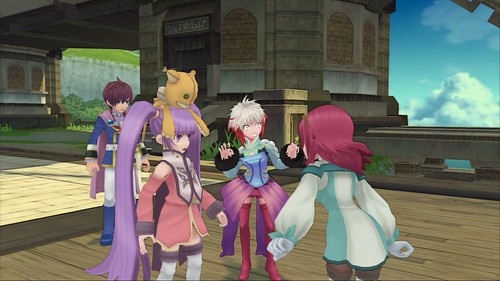 Tales of Graces F is the new addition in the renowned Tales of Graces series from Namco Bundai. This obviously brings many new characters with different backgrounds, personalities, roles and abilities. In this guide will we go over the main Tales of Graces F Characters, alongside their lore and fighting style.

Asbel Lahnt bares the pride of being the son of the baron Aston Lhant, who presided over the outlying region of Windor Kingdom, near the border of Fendel. Though next in line in becoming the baron, Asbel always desired the profession of a knight.

After a life-changing experience, he went into the training school for knights. Being enthusiastic and dedicated as he was, Asbel put his heart and brain to his training, maturing into a devout swordsman.

Asbel is a conventional swordsman. Though his main weapon is his sword, he can also use his sheath effectively for fighting. Thus he can switch between the two to increase his effectiveness in any kind of situation.

However, the switching itself takes a bit of time, but that can be overcome by learning different combinations. In short, Asbel is a very easy-to-play character who is well-suited for any type of situation.

An amnesiac with little to know knowledge of her past, Sophie has affiliated herself with Asbel, who is her caretaker.

Asbel stumbles across her during a border dispute between Lhant and Fendel, and despite her petite figure her amazing combat prowess helps Asbel fend of the Fendel assault. Though initially a quiet and shy girl because of her situation, Asbel’s assistance and encouragement helps her become better at interaction with others.

Contrary to what her physique portrays, Sophie has quite a bit of effectiveness in combat. Though she uses only her fists, her immense speed allows her to deal out combos very quickly.

She also has a single-target healing ability, making her a viable combat-support hybrid. Perhaps her only weakness is that she can be easily overwhelmed by numbers, since she lacks AoE attacks.

Hubert is Asbel’s younger brother. He is a lieutenant Strahtan military. Though as a young boy he was timid and weak, his immense hard work and training has shaped him into a talented swordsman. His approach to his brother, however, is rather glum, mainly because of his authoritarian personality.

Hubert is a high risk, high reward type of a character. He can do nearly just as much damage as Asbel, but lacks sufficient health and sustain to maintain a dominating momentum.

This is where his main weapon comes into play. Usually, it is a double-edged sword that can deal considerably large amounts of damage. When distance is required, the weapon becomes two handguns, giving him range and safety.

Cheria Barnes is the grand-daughter of the Lhant family butler Frederic. Because of her cheerful and caring nature, she is well respected and liked by her peers.

She also has a secret crush on her childhood friend Asbel, though she never openly admits. She is a compassionate and self-less person, and willingly protects and aids anyone who is in need.

Cheria Barnes is primarily a healer. However, she also has great amounts of damage and versatility through her unique technique. Her standard mode allows her to throw daggers at enemies from a range, while her burst significantly boosts her spells and healing effects.

Her physical attacks also allow her to be highly mobile, and she also has the highest amount of critical chance out of all the characters. Because of her tremendous versatility, she is definitely a force to be reckoned with. However, the only downside is her steep learning curve.

An experienced and wise knight, Malik Caesar is Asbel’s instructor at the knight training academy in Barona. He is an exceptionally skilled knight and has emblematic teaching skills. His general wisdom and flexibility attracts respect from just about everyone who comes across him.

Malik Caesar’s signature weapon, the Boomerang Edges, has the attributes of both a sword and a projectile. This makes him a very lethal ranged character. Though his throw is slow as compared to Cheria’s daggers, the arced trajectory of his sword allows him to damage multiple enemies.

What is more important is that Malik is primarily a spell-caster, and his burst offers plenty of offensive spells. Though he has relatively high health, Malik’s main weakness is his low defense.

Pascal is a genius technician and engineering prodigy who Asbel comes across in his travels. Most of the times, she is a very cheerful and extremely friendly person.

However, she has problems reading the atmosphere in situations and can sometime speak out in inappropriate occasions. Since childhood, she has been absorbed deeply into her work and research, and can often become lost in it.

Pascal’s weapon is a rifle staff, and she mainly focuses on offensive magic. Because of her ranged weapon, she can cast spells without the risk of interruption from enemies.

However, this is counter-productive, since these spells are in a specific limited region, thus requiring her to get in melee range for some spells to get better overall effectiveness.

The prince of Windor Kingdom, Richard receives very high respect and expectations from the commons for his understanding and peaceful personality.

More importantly, Richard is a very good friend of Asbel since childhood, and does a lot to help them. However, certain circumstances change that transform Richard in a manner that he becomes a complete opposite of what is his original loved personality.

Richard is a magic swordsman, relying on his trusty Rapiers. His normal attacks are fast and damaging, and his burst allows him to cast spells.

He has the defense of a mage and the physical prowess of a swordsman. This makes him very versatile, as he can take on enemies close-hand and then jump away to cast some spells.