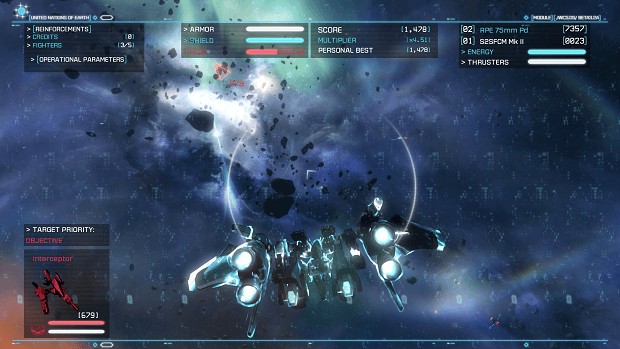 What Infinity takes from Zero is just about everything but the engaging plotline, and it replaces that with scorechasing and big numbers. I like big numbers.

The removal of the story element was confusing to me until I jumped into the gameplay of Infinity itself and realised that I was playing a game that could stand up on just its gameplay and artstyle. The entirety of Infinity is pure mechanics and that works for it in surprising ways.

Whilst there might not be a driving story behind it, if you’re a fan of Strike Suit Zero then you’ll be able to jump into this game straight away, and if you’re just testing the waters of space combat then there’s a short but helpful tutorial. 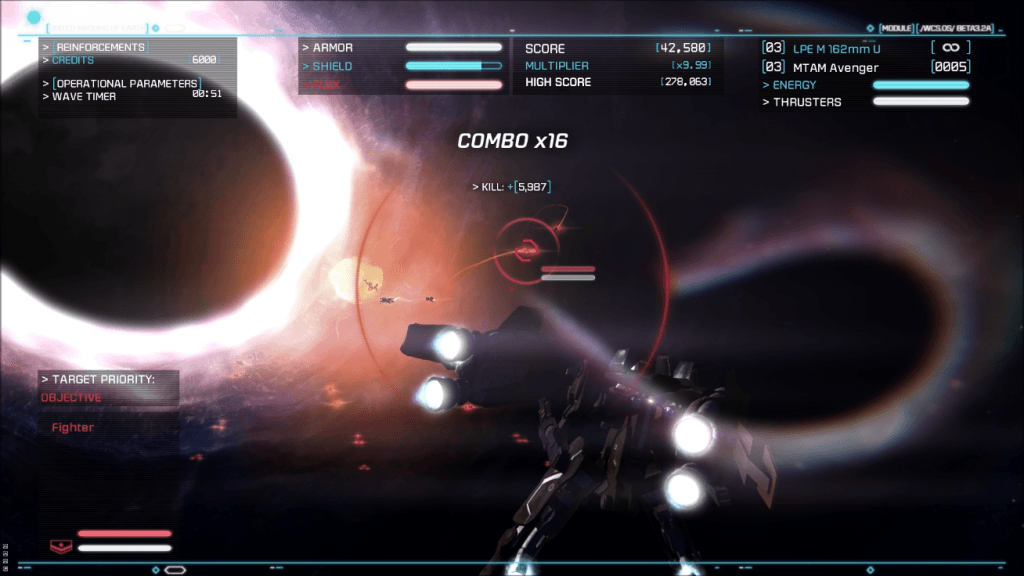 It’s all about the combos you can rack up and the points you can score. Infinity doesn’t guide you through a story, it instead pits you against waves of enemies that get progressively harder. The challenge is to see how long you can last and how high a score you can set, which gives it a very heavy arcade feel.

As you play more of Infinity and rack up higher scores, you’ll unlock more perks for your ship as well as more ships for you to attempt each run in. Each ship has a flux meter that charges as you blow stuff up, and at the tap of a button you can switch modes into a highly-destructive mech which drains your flux meter whilst it’s active.

When you change out into mech mode it can be a real game changer as you get temporary access to powerful weapons and fast dodging manoeuvrability. Deploying your mech mode and making use of your flux meter appropriately will often be what saves you from being destroyed by the oncoming hoards of enemies.

The biggest difference in gameplay between this and Strike Suit Zero is the reinforcements that you can buy with credits. These autonomous AI are normally flying around, but as you complete waves you can earn credits that can then be spent on more proliferant and more powerful reinforcements to help back you up and keep you alive for as long as possible, all the while they’ll be scoring points for you.

You can also spend your credits on upgrading the AI pilots, though it isn’t specified exactly what upgrading them will do. Whether it’s additional health and shields for their spacecraft, or just improved AI for better dodging and return fire, it definitely seems that they have increased longevity but whether that changes their overall effectiveness remains to be seen.

I tried playing Infinity with a joystick, a 360 gamepad and my keyboard and mouse, and the controls occasionally left something to be desired. Whilst they’re not complicated controls, they do require a certain level of finesse that might be difficult for people who are new to the genre. The gamepad was definitely the easiest to use, but it was a lot more immersive and fun whilst I was using the joystick.

The flight controls can be a little bit jerky at times, but the rest of the time they’re perfect. Once you’re used to how turning works on the 3D plane, you can really get into the game. There is still a problem however in the initial period for people who aren’t used to this sort of gameplay, especially as Infinity throws you straight into the thick of things after a short tutorial. If you don’t learn fast, then you’ll get left behind.

It might have only come out yesterday, but I’ve been thoroughly engrossed in playing it and trying to set a high score that none of my friends will be able to beat, which has proven to be quite the difficult task. Though whilst I’m constantly scorechasing, it’s hard to set myself against a target as there are only leaderboards for me to try and beat, when I’m just trying to beat my friends.

A quick bit of searching gets around this, but I can’t help but feel that they could have made it a bit easier for groups of friends to set up personal leaderboards and such. Once you’re in-game, it’s easy to forget about scores other than your own. 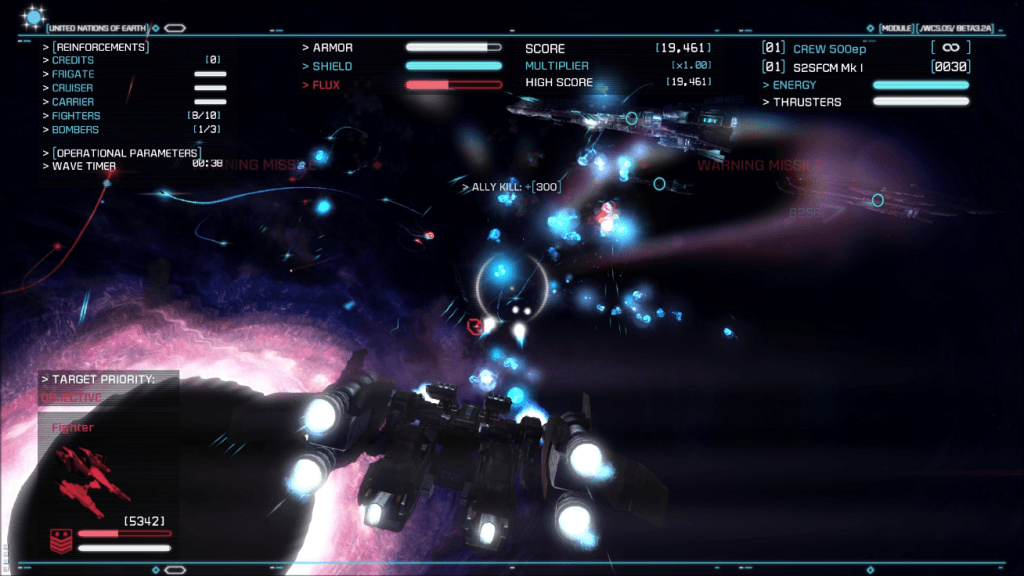 At its heart, Infinity is just Strike Suit Zero-lite. If you want a new space-combat game, then I can whole-heartedly recommend that you pick up Infinity or Zero. If you played Zero and are chomping at the bit for more, then definitely buy Infinity because it is essentially more of that. It retails at $6.99/£4.99 so it’s not exactly a huge investment for people who are just looking for something new and interesting to play.

Whilst it’s a gorgeous title with some great music, there’s an entry barrier for new users that is hard to get around sometimes, and the tutorial could do with being a bit more in-depth to help compensate for that. Also, whilst I don’t think that a game like this should be easy, it does seem to be a little bit -too- difficult in places. This game would have benefitted greatly from a smoother difficulty curve.

Gameplay
Whilst the gameplay is solid for a space combat game, it seems that you’re not given enough time to acclimatise yourself to exactly how Infinity plays or the enemies that it’s going to throw at you.

The actual dogfighting is completely excellent, with the AI written so that you don’t chase each other in circles endlessly, but unless you’re accustomed to exactly how the ships move then you’ll frequently find yourself flying at nothing whilst the quick, agile enemy craft just zip about doing their own thing.

Graphics
Drop dead gorgeous doesn’t even begin to do justice for the amazing visuals that Born Ready Games have put together for this game. No matter what ship you’re flying or where you’re playing, you’ll always be amazed by the stunning backdrops and detailed craft fly around.

Sound
As with the graphics, the sound for Strike Suit Infinity is also absolutely amazing. Paul Ruskay OST for the game is jaw dropping, especially when you hear the main theme featuring the incredibly talented Kokia.

There’s a serious fusion of futuristic Western style techno with the elegant Eastern tones from Kokia which makes for an amazing blend of style culminating in some incredible tracks.

Presentation
The way everything is put together is excellent, but a few of the menus can be difficult to navigate when using a gamepad or joystick.

Value
At just £4.99/$6.99, it’s not expensive at all. For those of you who want more Strike Suit or just a brilliant take on the old space combat genre, you’re getting a great deal. The scorechasing element means that you’ve got hundreds of potential hours in gameplay.

Verdict
It’s not a perfect game, but what is? Strike Suit Infinity is nigh-on perfect in the sound and visual department, but it’s let down a little bit by the slightly difficult controls and occasional problems with menu navigation.

Ultimately the only thing it’s lacking is a small story element to give you a reason to be doing any of the scorechasing.

I feel that they missed out on an opportunity to use Infinity with Strike Suit Zero, by integrating it as another part to the original game. It might sound strange, but imagine if hitting certain goals in Infinity would unlock new ships or weapons on Zero and vice-versa?

Strike Suit Infinity is nigh-on perfect in the sound and visual department, but it's let down a little bit by the slightly difficult controls and occasional problems with menu navigation.