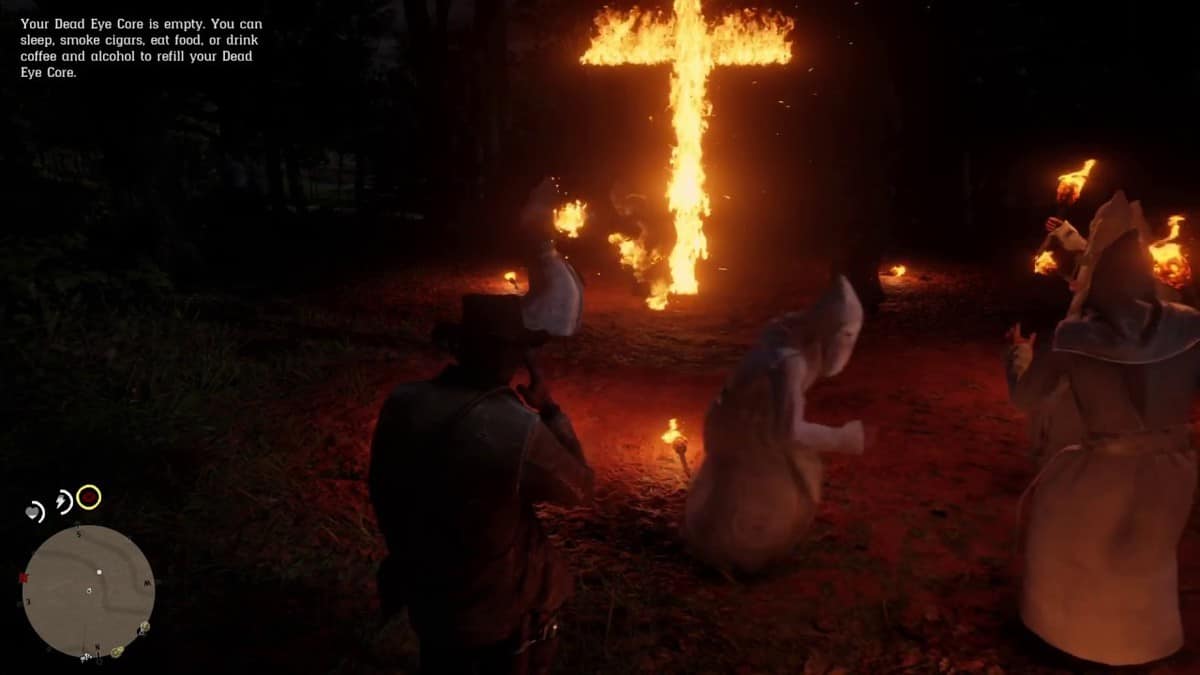 Rockstar is known for its controversial creations, which we all have seen with their recent game titles. Therefore, it doesn’t blow our minds to know that in Red Dead Redemption 2, there are hostile factions such as Night Folk and the Ku Klux Klan which roam around the landscape. Of course, finding the location of KKK and its members in Red Dead Redemption 2 isn’t as easy as you might think.

The Ku Klux Klan have been around since 1865 and Red Dead Redemption 2 takes place in 1899, which is after the end of the first Klan and before the arrival of the second Klan which occurred in 1915. In this guide we’ll tell the exact location where you can find the KKK in RDR2.

The KKK encounters in RDR2 are very special and happen only three times throughout the game.

Mostly these face-offs happen in the wilderness, in different areas of the wooden areas. To kill the faction, you can shoot, blow or stab each member.

The first encounter you’ll have with the KKK is in the Northern area just outside of Rhodes given on the map.

Search for the faction at Nighttime as it’s the only time you can encounter them during their ceremony in this area. Their appearance is quite fast therefore, you’ll have to be even faster to kill them, otherwise, you’ll lose your chance.

After you’ve dealt with the members of KKK in the Rhodes area, move between the Dakota River and Flatneck Station, be sure to approach the faction in day time or noon, in this area they show up before sunset.

Now, the last encounter occurs at the South-East of Wallace Station. You’ll notice the members of KKK very upset of the fact that not many of their members arrived, and you’re the reason for it.

The only time they show up is at nighttime, so make sure you don’t reach the area late because these encounters can end with a blink of an eye.

Once you kill all the members, simply loot their deceased bodies and you’ll find some notes, which may help you in your journey.

Each face off is entertaining and it may make you laugh. Many gamers have been confused whether the hero of the game “Arthur Morgan” is negatively affected by these encounters or not.

The simple Answer is No. But, since these encounters are very rare in Red Dead Redemption 2, where you can kill the whole faction without getting a scratch so, keep in mind to kill each member, as even a single alive member can increase your wanted level in the area.

These were the locations where you can find the KKK members in Red Dead Redemption 2, be sure to let us know if you found any members outside these territories