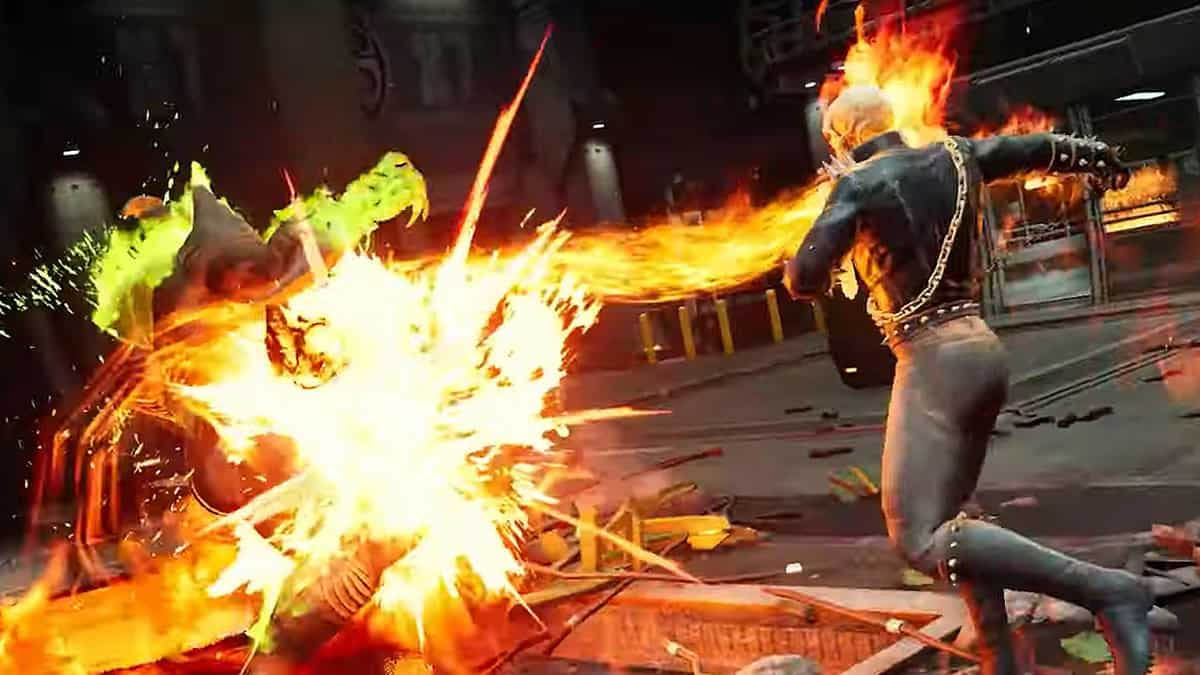 Ghost Rider is an offensive-type hero in Marvel’s Midnight Suns, meaning that his kit is designed to inflict as much damage as possible. Some of these abilities cause him to even inflict damage on himself to amplify his overall damage.

Some players might find Ghost Rider hard to use and integrate into their party. However, with the correct setup, Ghost Rider can deal tons of damage to your enemies.

In this guide, we will go through the best cards to use for Ghost Rider and the heroes he synergizes with.

Best cards to use for Ghost Rider in Midnight Suns

This card is a must-have. Upon using this card, Ghost Rider will perform a quick attack by using his chain that will cause his enemy to go through a “Full Force Knockback”, sending them flying through the air in the direction of your choosing. This will also grant you 1 Heroism.

This also deals damage to Ghost Rider. Due to this, we highly recommend pairing this card with the next one on our list.

Ghost Rider consumes 1x Heroism to deal massive damage to a single target. He also gets a perk where his damage will be doubled every time he receives damage from either an enemy or his own attacks.

The best way to use this card is to try getting it in your hand early on. Then make use of it after you have used any card that inflicts self-damage. Doing this will grant you massive damage boosts.

This card allows Ghost Rider to knock back the enemies. The card also generates 2 souls, and when Ghost Rider has 3 souls, it will strengthen his Drain Soul card.

Furthermore, combining the knockback effect with the Hellmouth ability allows Ghost Rider to perform instant KO on a single target.

Retribution allows Ghost Rider to deal environmental damage by knocking them off, causing massive injuries to the enemies.

This card allows Ghost Rider to deal much damage by consuming half of his health. The severe damage comes in the shape of an ability buff, making his attacks much more deadly.

This ability is very beneficial against Nest Mothers and shields Guardians. You can kill them or take their HP to the lowest, making it easy to finish the job.

After using Hellmouth, if you use the next card on our list, the enemy is in for a hell of a treat.

Ghost Rider sacrifices 25 percent of his health to deal damage to enemies based on each health point consumed. Upgrading this card will allow you to deal damage to all nearby enemies, not just a single target.

The damage penalty might seem like a lot but it’s actually not. This card will have a lot less damage penalty if you have already taken some damage. On top of that Judgment will restore 105 health on redraw.

This one is a classic card and a must-have to complete the best deck for Ghost Rider. Ghost Rider attacks multiple enemies and KO them by draining their health.

During the combat, Ghost Rider will get overheated, increasing his health beyond the maximum. The card can be used for offense and defense simultaneously. Making it one of the best cards in Marvel’s Midnight Suns.

Upon using this card, you will receive 2 Heroism and Ghost Rider will be replaced by a random drop. This means they won’t be able to do any action in this turn and he can’t receive damage on the enemy’s turn.

The idea behind using this card is that as you keep using Ghost Rider cards that cause self-damage, his health will keep on depleting, and he might become an easy target for the enemy. You can use this card to protect Ghost Rider from taking damage from the enemy.

Both effects are perfect to complement Ghost Rider as he needs to heal after his attacks due to self-damage. Strengthened is just a bonus on top of that.

Hunter has come good healing cards at his disposal that will help Ghost Rider to recover from the damage he takes from his own attacks. With Hunter on your side, you don’t need to worry much about using Ghost Rider cards with a damage penalty.

He will be the primary used to buff Ghost Rider’s damage. He is a decent support in the early game. In the long run, Nico is ideal for Ghost Rider as support.

However, if you still decide to go with Doctor Strange, he has some unique offensive cards too.