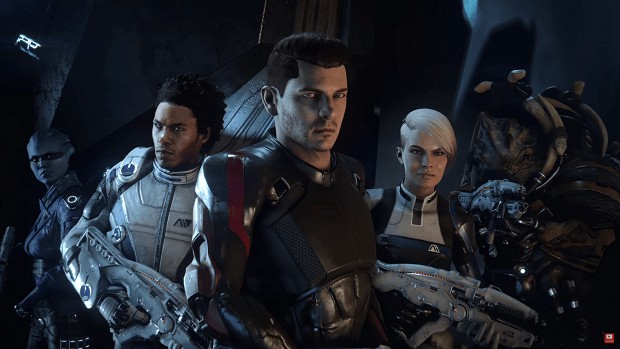 Mass Effect Andromeda Characters Guide to help you learn everything you need to know about your potential squadmates in the game along with their best weapons and abilities.

Characters in Mass Effect Andromeda come with their unique abilities that you can use to your advantage. Due to this, it’s important to understand the strengths of your squadmates so that you can put them to good use.

There’s old, and then there’s Drack. This elder krogan spent more than 1,400 years causing a ruckus in the Milky Way — wearing the title of soldier, mercenary, and at times, pirate. When the loyal, but stubborn, veteran was given the chance to join his clan on a voyage to Andromeda, he had no choice but to sign up. Doing so would present him with a whole new galaxy of stuff to shoot.

Drack in Mass Effect Andromeda is a close-combatant and veteran warrior. His preferred weapon is Ruzed Shotgun which he uses to mow down enemies. As for his preferred ability, Blood Rage allows Drack to jump into the battle with increased melee damage, damage reduction and increased HP regeneration.

A crisis response specialist with civilian tactical training, Liam learned of the Andromeda Initiative after meeting former Alliance personnel at a “post-hostility relief action.” His multi-disciplinary skills set him apart, and Liam was hand-picked to support the Pathfinder team. He’s an idealist, willing to take risks for the good of the Initiative.

Kosta in Mass Effect Andromeda is a close-ranged fighter with a jump jet for increased mobility and to reach enemies quicker than anyone else. His preferred weapon is Overclocked Dual Omni-Blades. As for his preferred ability, it’s called Havoc Strike which allows Kosta to jump forward with his Overclocked Dual Omni-Blades to stun enemies and prime them for combo detonations.

Surviving the rough world of smugglers and mercenaries requires street-smarts, adaptability and cunning, qualities that serve Vetra well in Andromeda. Her experiences have taught her the importance of having someone to watch your back, and she’ll do anything for the people she considers friends and family.

One of the best things about Nyx is her custom-made upgraded armor that provides her with additional shields and allows her to stay in the heat of the battle for extended durations of time. Her preferred weapon is a Modified Cyclone Assault Rifle. As for her preferred ability, it’s called Power Armor which further hardens her custom-made armor that provides unparalleled protection against all odds.

Cora joined the Systems Alliance to train her powerful biotic talents, eventually transferring to an Asari commando unit before joining the Andromeda Initiative as Alec Ryder’s second-in-command. Professional and loyal, Cora knows the rules well enough to bend them if necessary, lending huntress tactics and her biotic strength to the Pathfinder’s mission.

Cora Harper in Mass Effect Andromeda is a specialist in Biotics and Operations. Her choice of weapon is a shotgun and her best ability is Biotic Charge. This ability basically sends Harper at the enemy while restoring a small portion of Shield Strength at the end of the ability.

Peebee walks to her own daredevil drumbeat and has an unrivaled thirst for adventure. She’s pathologically independent but manages to maintain a loose, even friendly spirit. Bored with the Milky Way, she would have done anything to join the Initiative – flirt, favors, fudged credentials. But to her, she was just hitching a ride to the great unknown.

Peebee in Mass Effect Andromeda is a Gunslinger and a Biotic Destabilizer. Her preferred weapon is Sidewinder Outlaw Pistol. As for her preferred ability, it’s called Invasion which lets her infect enemies with an invasive VI-controlled machine swarm that weakens their defense and spreads itself to nearby enemies.

An Angara; the only known extant sapient race native to the Heleus Cluster of the Andromeda galaxy, and arose on the planet Havarl. Jaal comes along with the invading Kett and the ancient Remnant as a part of the New Galaxy. Jaal may be an Angara but of a higher rank. He tries hard to adjust in the team and wants to change his aim in life.