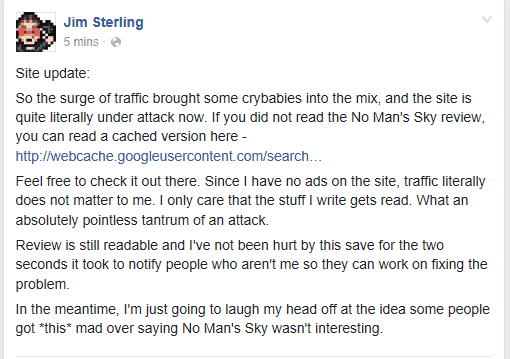 No Man’s Sky is now available on Playstation 4 and managed to amass mixed opinions from critics.

Videogame critic Jim Sterling recently published a review of Hello Games’ No Man’s Sky giving it a 5/10 and calling it ‘Mediocre’. However, soon after the review was published, fans were unable to access the website because of a DDOS attack.

For help on No Man’s Sky, read out our In-Depth Crafting Guide, Resources Farming Guide, and Trading Guide.

An excerpt from Sterling’s review of the game reads:

“Even with my expectations guarded, however, I did not expect just another survival/crafting game that used randomization as a crutch to the point of losing all potential personality. And I at least expected more to fucking do.”

The blog was back online after a while, but here is what Sterling had to say about the matter:

Also Read: SegmentNext.com is giving away three copies of procedurally generated space exploration game on the platform of your choice. In order to enter the giveaway, all you need to do is to subscribe to SegmentNext YouTube Channel and comment on the article found on the link!

In all honesty, I find it pretty funny that fans can actually get this mad over someone’s opinions. I mean, if you like the game then go ahead and play it all you want, but this sort of thing is ridiculous at best.

No Man’s Sky is now available on Playstation 4. As for the PC version of the game, it is scheduled to release on Aug. 12, 2016.

Did you get a chance to try out No Man’s Sky? Share your initial impressions with us in the comments section below!