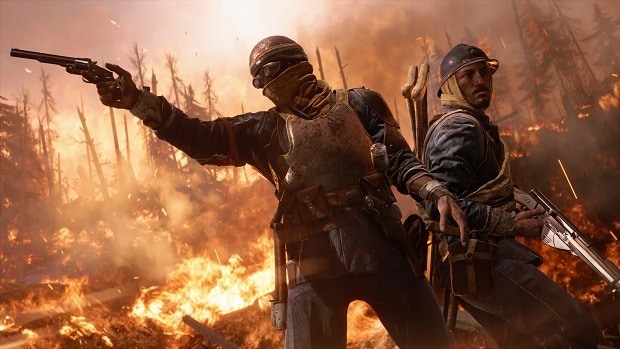 The rising strength or shall we say gimmicks, of Battle Royale games has seen so much success that it is only fitting that franchises with big names are employing a similar strategy. We already know Call of Duty: Black Ops 4 has dumped its singleplayer for a Battle Royale Mode in addition to its normal multiplayer aspect.

Battlefield V also adopted some mechanics from Fortnite, like building for the first time ever in a Battlefield game. Lawsuits aside, if everything runs smoothly up to launch, can the long-term heavy hitters actually trump the likes of PUBG and Fortnite? We discuss below!

Even if both of these games have opted for the inclusion of a Battle Royale Mode, they are still very different beasts. First, the setting for both games are drastically different from one being set in an alternate take on WWII while the other is set in the near future. These settings play into the gameplay including the movement and weapons players can come to expect.

Even though the new COD will eliminate the boost jumping and wall running mechanisms, it will still be a fast-paced shooter with close quarter combat and on-the-edge-of-your-seat entertainment where no corner is safe. Battlefield, on the other hand, goes for a larger map, ground and air-based vehicles, and a class system where each player has a role to play be it the medic, the engineer or someone else.

This basic formula is unique to each of the two franchises and fans who have been following the series already know what they will go with again, regardless of how the Battle Royale Mode turns out to be.

We know Black Ops 4’s Battle Royale Mode is titled Blackout and will feature iconic characters, popular weapons, and even similar maps from the previous entries in the series. This will also be the first time; a larger map makes its way to a Call of Duty game.

For Battlefield, the details are a little scarce but we got the official announcement of a royale mode at EA Play 2018. The Grand Operations mode certainly fits the definition of a royale mode with the parachuting-from-sky and the last-one-surviving mechanics.

However, we will still have to see if that is official. For now, we know there will be a new construction feature like in Fortnite, so this time around it is not all about destruction. Team play will also play a big role in the royale mode.

Will they be Successful Relative to PUBG and Fortnite?

Now, this is a bigger question: can a game titled A which is a derivative of another one titled B become more successful than B? Well actually, neither Battlefield nor Call of Duty games are full-on Battle Royale games. They have kept their own trademark mechanics together along with their popular modes like co-op mode in Battlefield V and the Zombie Mode in Black Ops 4.

This allows them to have an appeal not just to the Battle Royale loving fans but also to anyone who has an interest in shooters.

For Black Ops, neglecting the singleplayer will hurt as players have grown to love the story-telling and action set pieces they’ve played through in all of Call of Duty’s campaigns. Therefore, no doubt, they will lose a little part of their community. But still, they will make up for it in terms of attracting people who weren’t even part of their community but now will be thanks to the royale mode.

Battlefield V has been a little more loyal to the fanbase by bringing back its old co-op mode from Battlefield 3 and keeping the ‘War Stories’ from Battlefield 1. Additionally, the multiplayer aspect was non-linear enough to definitely suit the Battle Royale system.

With more vehicles than ever in a shooter, maybe this could very well be the most popular Battle Royale game around.

Unlike PUBG and Fortnite, these franchises are not starting anew. They do not need to convince people of their quality because the series has been around for such a while that their names alone speak volumes. Going in a bolder direction would certainly be against some fans’ wishes but it will not stop the series from evolving into something that is popular right now and market-feasible. After all, y’all asked for it!

That is not to say, fans who have never liked shooters with deeper mechanics will continue to stay away from them and go for something lighter in both tone and gameplay like Fortnite.

PUBG has already faced several shortcomings with its sale going all downhill and these two new games who challenge the Battle Royale idea will mean PUBG would face even more difficulties now than ever before.

However, PUBG is sure to face adversaries in some way or the other. As for how both FPS can captivate audiences with their new royale modes is up to them for not messing up performance but ensure a smooth and glitch-free experience at launch and throughout the life cycle of each respective game.