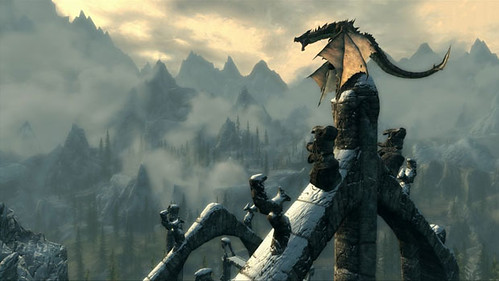 Starting off with the basics, character customization is going to be at an all time high. Almost every aspect of the character can be changed, hair styles, beards, scars and even face paint has been made available.

Each class has a heavy and light build and anything in between can also be picked. Character facials can be tinkered with to the max and help produce some real one off finished products.

The armor system is same as Oblivion, only with upper and lower armor, now visually being combined to give better visuals and to create easy rendering. Dragon items will be amongst the rarest in the game and will also be able to be forged into weapons. Leather and steel armors are making a comeback.

Keeping with Oblivion, the quest system is pretty much the same, the main story follows a main plot, while sub-quests and stories are open ended, a player’s action would determine the ending of the mission.

Gameplay has been the prime focus of the team, when developing the game and for that reason, the items available in the game are the same as Oblivion. Meaning that the players will now be able to interact with the game a whole lot better, but would still have a limited number of resources to choose from.

Relationships with NPC’s are also integral to the game. Some NPC’s might even tag along for dungeon missions and adventures, while others might be more interested in getting married.

The PC and console version of the game is going to be fairly similar, with PC users having the advantage of using hotkeys, to easily access things, that console users would have to spend time on doing.

The different races will have some advantages/difference over the others. I am going to quote the Skyrim interview here to give you a better understanding of what I am talking about:

So Khajiit can see in the dark, Orcs have a berserk power, Redguards have Adrenaline Rush, and so forth. They work differently in the new system, but the flavour is the same. We kept all the racial movement speeds the same, that’s now a factor of what you’re wearing and have equipped. And starting max encumbrance is the same and is based on your Stamina attribute.

Race selection will also force you to follow a bias, which the race has. However, you could chose to avoid that, but where is the fun in that? Gender won’t change anything, other than when people interact with you, they would refer to you as a male or female, while the skills will be the same for both genders of all the races. However, animations would greatly differ between the genders.

One new feature in the game is the addition of tavern-brawls. They are non lethal and sound like they might be a lot of fun. A new AI system means bosses will now have to be beaten with strategy, instead of just using health packs and items to get past them. This is going to add to the overall playability aspect of the game and is going to make it much more challenging.

There isn’t going to be a karma system in the game, based on number, but should you behave badly, the world will react so. There wasn’t much revealed about the grunts and the shouts, other than the fact that they would be the only voice of your character. Lastly, the game will not end once the main story is over, but would be open to be played for as long as the player wants to keep going.