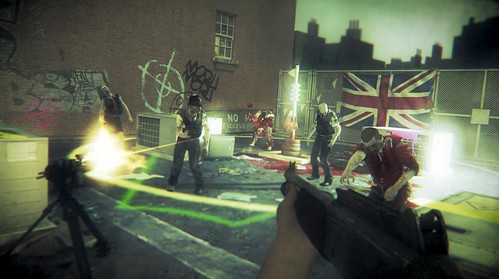 Before you jump into action and fight the gory battles with the zombies, you will be asked to select the weapon and equipment you will be using at the start. I won’t say that there are plenty of options to choose from but if you know the difference between each ZombiU Weapon Loadouts, you will be able to use them tactically in different situations.

Among the 7 provided weapon sets (loadouts), you need to choose one which will include your primary weapon, secondary weapon and an item like grenades, etc.

Following are the default loadouts you can choose at the start of the match:

I love to take out zombies with a shotgun. For its effective use, you will have to be brave to stay close to the zombies. Some players in confusion fire it from distance which to be honest is useless. If you like to get up close and personal with zombies, this is a recommended loadout for you. And yes, you can use flare to distract zombies or to gather them at one place.

Another shotgun based loadout well suited for short-range combat. If you don’t feel comfortable with Double-Barrel (mostly due to accuracy issues), you can choose this loadout. It comes with a grenade which can be useful to take out a group clumping together.

Apart from short-range effectiveness of the primary weapon, you get to use of the hunting crossbow. I personally am not a big fan of it, but if you like to be a hunter, you can give this loadout a try. The Molotov in this loadout can be quite helpful as fire can help you keep zombies at bay.

Don’t like the shotguns and still want efficiency in short to medium-range combat? The MP5 SMG can be a feasible option. This weapon is cool for those who want to rush and stay mobile.

It does more damage at a short range so try to take out the undead first who are not too far otherwise; you will end up consuming all your ammo. This loadout comes with a grenade which you can use in the difficult situations, especially when surrounded by the zombies.

Another SMG based loadout with UMP45 being its primary weapon. Just like the MP5, you can use it effectively in closed quarter combat. With a grenade, you also get to use the P226 pistol with it.

No shotguns? no SMGs? It’s not the end of the world as you have assault rifles at your disposal. The classic AK-47 has been included in the list of weapons, and you will not regret using it on a go. In a team, if you are playing support, this is a great weapon for you. You also get P226 pistol as the secondary and Grenade as the item of choice.

The second Assault rifle you get to choose is the SA80a2. It may not do damage as much as AK-47 but its better accuracy can compensate for the former. You also get the Molotov as the loadout specific item.

Now that you know what all the default loadouts are, let’s dive into the best loadouts you can make yourself in ZombiU.

Ballistic Knives PaP’d: This will allow for immediate revives and will let you get to downed players very quickly.

RPD; If a friend is being cornered, or if their train has been let go and you need to go through it, this will come in very handy.

Stamin-up: This will further increase your travelling speed.

Quick Revive: If your Krauss Refribrillator runs dry of ammunition, or maybe you want to save up on ammo, this will let you do so.

This loadout is a very useful one to have in your team. Having at least one teammate with this loadout will allow your entire team to stay alive much longer and be more aggressive with their play-style.

Mark II: The Mark II will make quick work of the Panzer/Japanese enemies.

Hamr: The Hamr just has an insane amount of ammo.

Fire Staff. It is super easy and quick to build.

Speed Cola: This will work hand in hand with the Hamr as it will allow for very quick reloads.

Mule Kick (To also acquire the Double Tap): This will make your Mark II pretty much fully automatic. Works very well with the Hamr/Dead Shot.

This build is an absolute tank. Not only will it let you dish out an impressive amount of damage, but it will also let you take quite a bit of it yourself, as it is so bulky. The best thing about this build is that it doesn’t sacrifice speed all that much for power.

Deadshot: This will let you get headshots much easier with revolvers. You could also use Speed Cola instead of it if you prefer to have quicker reloading speed instead.

Vulture Aid: Will let you get even more ammo.

Up to the tenth round, using a revolver with Deadshot will net you 1 hit kills. Keep switching in and out of ADS while you fire in time. From round 11 and onward, it will take 2 hits to take down targets, but it is still easy to get headshots. The high ammo count of this build will allow you to just mow down the zombies.

MP40: This weapon will give you a consistent source of ammo

Boomhilda: This weapon is very lightweight, allowing for quick travelling. It is also very easy to obtain.

Stamina-up: This will further increase your travelling speed.

PhD: This will let you disregard fall damage.

The main focus of this loadout is speed. It will let you get to any point on the map as fast as you can. One thing to note is that you can squeeze out some bonus damage in a train if you get Semtex after you have PhD.