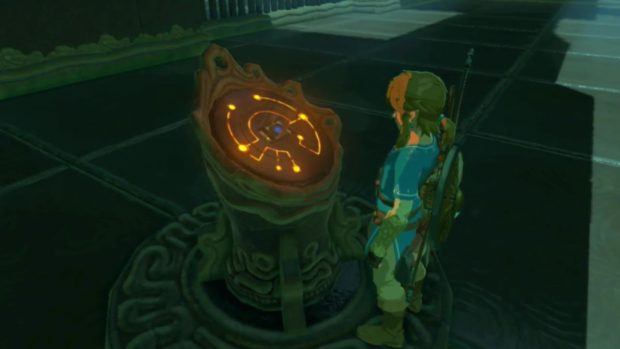 The Legend of Zelda: Breath of the Wild Divine Beast Vah Rudania Dungeon again comes with five different terminals and a final boss fight for the players. The following guide will discuss how to reach the terminals and beat Fireblight Ganon.

For more help on The Legend of Zelda: Breath of the Wild, read our Memories Locations Guide, Max Health Guide, How to Tame Horses and Great Fairy Locations Guide.

Head through the front entrance to enter the quest area. The room is dark, so you must bring a torch beforehand, however you will be able to see three eyeballs in there.

Take them out with arrows or bomb to drop treasure chests from them. One of the chests contains torch to assist you if you didn’t bring one along.

You can light the torch from the lanterns placed in the room.

In one corner of the room, there is an unlit lantern. Light it with your torch and a sliding door will open.

Enter this room to take out a guardian scout right in front and four eyeballs hanging on the wall. Once done, light a torch and head to the left side to light another lantern to open the gate.

Inside this room, you must interact with the console which’ll give you a map of the Divine Beast. Doing this will also light up the area making everything visible.

You are now tasked with activating five terminals located in different locations inside the beast.

Terminal 1
Exit the map room and head hard left into the area with two lanterns burning at one side. Use a burning arrow to burn ivy growing on the left wall. Doing this will reveal a gate behind it. Open it using Magnesis and enter to interact with the first terminal. Also burn the ivy above this terminal to drop a chest.

Terminal 2
Next up, there is a door beside the two lanterns with a see-through in it. Fire a flaming arrow through it to light the lantern on the other side and open the door.

Once inside, burn the ivy on the ceiling to drop a huge block. There is a fire wall on the left, use Magnesis to move the block to make way through the fire wall. Behind it awaits the second terminal.

Terminal 3
Jump to the right where the first terminal is and go up the giant ramp, taking out the corruption as go move up.

Once you are up there, time to rotate Rudania 90 degrees again. Go up the latter and do not light the lantern in front of you for now.

Climb over the fence and rotate Rudania 90 degrees again. Walk on the spiked back and grab the chest before rotating again.

Face to the head of the head and you will see the next terminal.

Terminal 4
Head out onto Rudania’s back by climbing the walls in the main room where a wall is decorated with red dotted patterns.

To go out, once underneath that wall, rotate Rudania in order to climb the side ledge of the wall, it’ll lead you outside.

Take a lit torch before you go, it’ll help you activate a door that’ll help for the next terminal. The lantern right outside when lit will open a gate a ball will drop and roll down.

Head back inside into the main area. The lantern which was near the terminal 2 now needs to be lit. It will open a gate and a large ball will drop.

Follow the ball and use the Magnesis ability to open up a path for it. The ball will drop through a hole that will open the final door.

Terminal 5
Head back outside onto Rudania’s back and find the last terminal somewhere on the platforms outside. It’s near a chest there.

There are three different phases to this boss fight. During the first phase, all you need to do is use combo attacks and keep dealing as much damage as possible while being careful.

Use your shield to avoid damage and use a one handed weapon to go with it.

The second phase is a little tricky as he starts to float around making it hard to get close.

What you need to do is use bombs on him as soon as he tries to throw a fireball at you. Keep in mind that he can’t take damage from anything else while in fireball stat.

The final phase is relatively easy as all you need to do is avoid his laser and get close to deal damage. Rinse, wash and repeat!