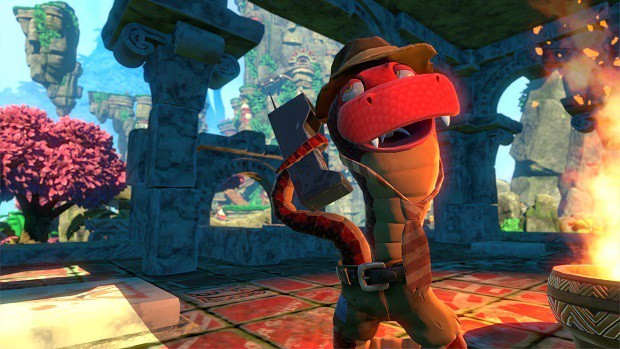 This Yooka-Laylee Trowzer Locations guide will help players track down the salesman across all the game worlds as well mention which abilities can be purchased from which world.

Trowzer, the travelling salesman in Yooka-Laylee can teach players some cool new moves. In order to learn these moves, players must first find him and then purchase the moves from him by spending Quills which can be collected through the various game worlds.

Depending on which world the players are in, Trowzer will change his location as well as teachable moves and their prices. In our guide, we’ve detailed everything you need to know about finding Trowzer in different areas.

Shipwreck Creek
This is the first world in the game and you’ll meet Trowzer besides a locked gate where he introduces himself and explains the process of learning moves by spending Quills.

You can trade in 10 Quills to learn Tail Twirl at this point, a power useful in collecting items required for opening the path to Hivory Towers.

Hivory Towers
You can find Trowzer in this area talking on his cellphone, which is common as the phone mostly rings whenever you’re near.

The Slurp Shot power, learned later, can be used to unlock the Archives and talk to Trowzer in there which allows you to learn Bubble Walk.

Tribalstack Tropics
This location is quite difficult to find due to the complex routes. Once you are in this world, you need to head forward towards Duke’s Temple, located in the center of the world.

Using Reptile Roll, you can reach the second story of the temple where Trowzer will be relaxing next to a pillar in the center of the temple. Here you can learn Slurp Shot, Sonar Shot and Buddy Slam.

Glitterglaze Glacier
Glitterglaze Glacier is the second World you’ll travel to in the game. Finding Trowzer is easy, the salesman is found hiding in this World. All you have to do is locate Hoops Challenge; east of Vendi’s Location.

Once you’ve found him, you’ll learn Slurp State and Lizard Leap here. After learning the moves, return to the Hivory Towers and move towards the Archives to use the Slurp Shot power and unlock Archives by activating a button on the door.

Once done, go inside and interact with Trowzer; on the left side at the back, to learn another move called the Bubble Walk.

Moodymaze Marsh
Here Trowzer will be hiding near Vendi so once you find her, finding the salesman shouldn’t be a problem. Sonar ‘Splosion and Lizard Lash can be learned in this area.

If you managed to get all the Pagies in Moodymaze Marsh, you can go back to Hivory Towers and find Trowzer in Capital Cashino, interact with him to learn a move called Camo Cloak.

Capital Cashino
Capital Cashino is the fourth World in the game. Trowzer will be located near a set of Corplet Statues inside Capital B’s casino. Once you’ve found him, interact with him to learn Reptile Rush.

After learning Reptile Rush from here, exit Capital Cashino and find Trowzer relaxing nearby Vendi in the Hivory Towers. Interact with Trowzer in Hivory Towers to learn Flappy Flight.

Galleon Galaxy
The last World in the game, Galleon Galaxy is the place where you’ll learn your final moves. Travel to this World and find Trowzer nearby Vendi. Interact with him and get the Sonar Shield (final form of the Sonar Shot), which allows you to go through gas and lasers.