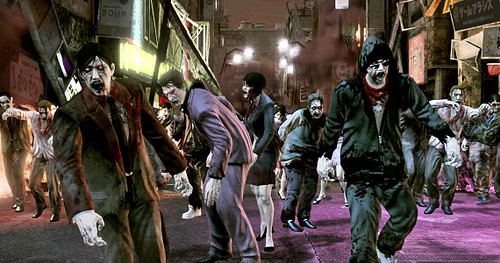 In Yakuza Dead Souls, there isn’t much variety of enemies you will face, but you can console yourself by the fact that they will all be zombies. At any time during the game, you can check the number of enemies/zombies you have killed listed by their types in the pause menu.

For more help, read our Mini-Games and Crafting Recipes Guide.

General Zombies
These zombies can go down easily with a single head shot. They can be found through out the game so a particular location cannot be specified. These are – Yakuza Zombie, Homeless Zombie, Ordinary Zombie, Self Defence Force Zombie, Convenience Store Zombie, Waitress Zombie, Police Zombie, Security Guard Zombie
Female Zombie and Rich Zombie.

Zombie Transient
As the name goes, these are former transients, and you’ll see how they’re clothing won’t really be very different from whence they were counted in the living.

Zombie Civilian
These zombies were former ordinary people who ended up becoming zombies. Considering that many of the civilians of Kamurocho became zombies, you realize how they’re a lot of these vile creatures out there.

Zombie SDF Soldier
You will find this type of Zombies mainly in Kamurocho Hills.

Shun Akiyama
Location: Tenkaichi Alley, across the street from Public Park 3
As for the spawn trigger, you will have to go to the escalators that lead to the Theater located underground.

Goro Majima
Location: Park Boulevard, near the northwestern barricade
Go to the Senryo Avenue North Entrance since that will be the spawn trigger for these.

Ryuji Goda
Location: Shichifuku Street, eastwards of the pitching machine and in the mass of mutants.
The spawn trigger for them will be the Pink Street entrance.

Kiryu
Location: Taihei Boulevard West, in the mutants
The spawn trigger for these will also be the Pink Street Entrance

Crying Woman
Location: Akiyama’s Chapter 2
The Crying Woman zombie will not attack if you get close but will cry out and summon lots of other zombies that will charge to attack you. The best possible way to get out of this scenario is to take her out at first glance so that she doesn’t get the chance to call for help.

Macho Man Zombie
Location: Akiyama’s Chapter 2
The weakest part of this zombie is the face, so focus your attacks on that part of his body. You can use the Heat-Snipe to attack his face. This way, you can take him down quickly.

Pipsqueak
Location: Akiyama’s Chapter 3
This zombie is a bit tricky to kill as it is small, quick and roller skates back and forth as it gets close to you.

It has two basic attack; one is a sliding attack that will trip you up, and the second one is a grab where he jumps up and latches onto you. Use Heat Snipe against its jumping attack or take him out with a shotgun.

Metabolic Syndrome Zombie
Location: Majima’s Chapter 1
He is huge but is easy to kill. Just take a headshot!

Tribal
Location: Majima’s Chapter 1
It will not attack you until, and unless you shoot it first, use it for your advantage and either head shot him with some powerful weapon or rush him with your shotgun and drop him to the ground before unloading the bullets in his head.

Flying Boy
Location: Goda’s Chapter 1
He is not very difficult to deal with, just keep your distance from him to avoid his spit attack.

Rock Buddha
Location: Goda’s Chapter 1
It has a rock amor which you need to focus in order to take it down. Shoot it until the armor cracks, then shoot at the hole in the chest or shoot away the rest of the armor, and finish it off.

Bosses in Yakuza Dead Souls are experimental zombies and they are listed below!

Yatsukahagi
Location: Goda’s Chapter 3
It is an octopus type experimental zombie; so first shoot off its tentacles and then take out its health, and kill it with a Heat Snipe action.

Basan
Location: Kiriyu Chapter 3
It is an annoying flying experimental zombie. Sniper and assault rifle is suited best against this boss.

Onraki
Location: Majima Chapter 1
It’s like a giant rock experimental zombie. Take out its rock armor and then the red orb in its chest to finish it off.

Tsuchigumo
Location: Majima Chapter 4
It resembles a spider type experimental zombie. You have to take it down with a heat action. It is somewhat difficulty on the higher difficulty levels.

Itsuki
Location: Final Chapter
It has a Satellite Laser so the monster rifle will do the trick on him. This enemy is a bit tough to kill but only if you won’t follow the general guidelines in the enemies section of this guide!

Have something more to add? Voice your suggestions in the comments below!