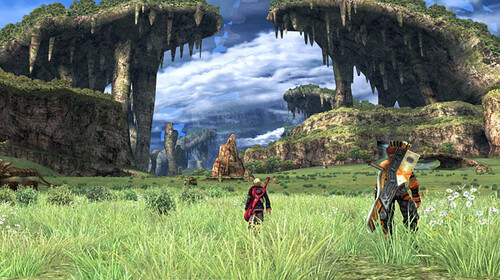 You can access these items from the in-game menu for the selection during the gameplay. For the time being, in this article, I am going to overview different weapons, armors and materials so that you may not waste much time in understanding them. After all, it’s an RPG and these games suck time like a black hole.

There are a variety of weapons to choose from. You can get a Blade, a sword or even a rifle and the list goes on.

It should be noted that the party members cannot exchange weapons with each other. Most of the weapons, however, are marked as “U” or “S” which means Unique and Slotted weapons respectively.

Slotted Weapons
These weapons allow you the customary power as you can add Gems to their empty slots. Addition or removal of Gems to these slots won’t cost you anything and each weapon can have different Gem slots.

In Xenoblade Chronicles, there are five categories of Armor: Head, Torso, Arms, Legs, and Feet. For each category, there is a light-weight armor, medium-weight armor and a heavy-weight armor. The agility of a character has an inverse relation with the weight of the armor.

Party members by default use the light armor which has low physical defense but better ether defense. Heavy armor can provide more physical damage resistance but for that, the party members need to some special skills.

Slotted Armor
The armor has an empty slot for a Gem. So, you can modify it a bit according to your need if you have appropriate Gem.

Unique Armor
They don’t have any empty slots to add Gems on them. There is a predetermined Gem which cannot be removed. It’s noteworthy that all the unique armor with the same name have the same Gems on them.

Materials are the items you collect as loot, either from enemies or from different chests during your quest.

You can sell or trade these items with other items you need. In Xenoblade Chronicles, we can divide materials into two categories:

Common Materials
These materials are usually dropped by the enemies. They aren’t that important and are used only in a few quests.

By default, Arts possessed by all the characters start from Level I. You can initially upgrade them using Art points up to level IV. Without Art’s manuals however, you won’t be able to spend your AP for further upgrades (Only Monado Arts won’t require any art manuals).

To reach Level VIII of a particular Art, you will need intermediate Art’s manuals while advanced Art Manuals can get you to Level X.

Generally, you can purchase Art’s manuals from stores but for the Advanced Art manuals, you will have to hunt down high level enemies and bosses.

These items cannot be sold as they will be important in different quests. You will be able to use them automatically upon need.

These items can be embedded on the empty slots on the weapons and armor, etc. to change their stats and abilities. Their importance cannot be ignored especially for the party members as their performance can be improved to a greater degree using these Gems.

Gems can be crafted using Ether Crystals. You can collect ether crystals either as loot from dead enemies, or you can mine them according to the requirements. Overall, there are VI levels and colors of Gems having different capabilities. You can refer to our Gems and GemsCrafting Guide for further assistance.

Throughout your adventure in Xenoblade Chronicles, you will collect Blue Orbsa’s collectibles. You can sell them but primarily, they should be used as gifts to increase the affinity between the party members. These collectibles will also fill up your Collectopedia which on completion (region wise) will earn you different Gems.

Well, that’s it for the basic details of every item in your inventory for Xenoblade Chronicles. Now, if you have any questions or any other related information, let us know in the comments below.