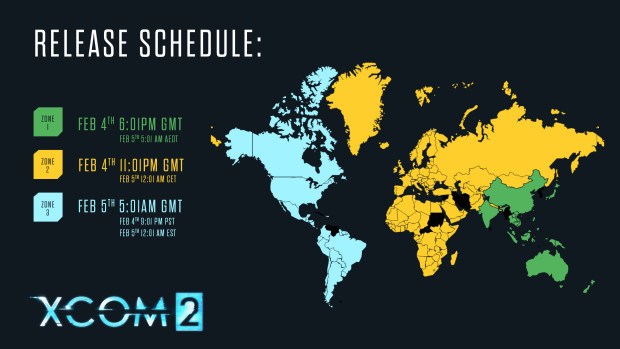 XCOM 2 is only days away from release and for those who have pre-ordered, the pre-load is available now. This will allow you to have the game ready to play when it is unlocked on release day.

Along with this news, 2K have also provided details on when the game will unlock in the different regions around the world:

“Greetings, Commander. We’re happy to report that pre-load is now live for XCOM 2 on Steam. If you pre-ordered the game, simply head into your Library and click on XCOM 2, then click the Pre-Load button to begin downloading the game.

All pre-orders and pre-purchases of XCOM 2 or the XCOM 2 Digital Deluxe Edition will receive the Resistance Warrior Pack, which offers additional soldier customization options like bonus outfits, headgear and custom facial war paint. The Resistance War Pack also includes a “Survivor of the Old War,” a new XCOM recruit who will appear in the Avenger’s barracks.”

The image below reveals when the game will unlock for different regions:

Hopefully this should make the release painless for people eager to play the game. With this being a PC release, with the possibility of a console version in the future hopefully there will be no performance issues.

Are you looking forward to the release of XCOM 2? Let us know your thoughts in the comments section below.