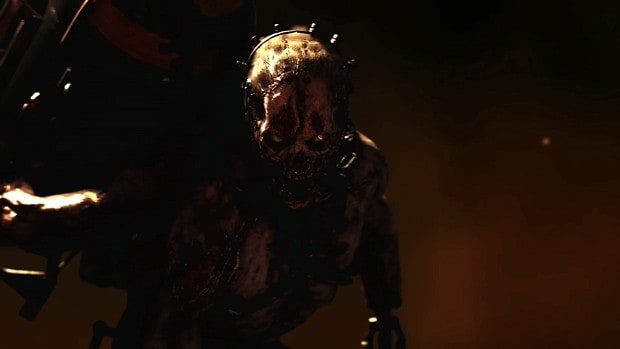 The Darkest Shore is out in the wild. It takes place several days after the events of The Final Reich in 1943. Similar to previous iterations, The Darkest Shore features an elaborative ‘Easter Egg’ for you to uncover among a plenty of secrets. This is where our Call of Duty: WWII Zombies The Darkest Shore Guide comes in.

We have discussed everything from Power-Ups, Perks, Weapons, Characters Unlocks, Enemies, and more. Moreover, we will continue to update this guide to make it as comprehensive as we possibly can. If you find anything that we somehow missed, do let us know by heading to the comments section below.

The Darkest Shore sees Marie, Drostan, Olivia, and Jefferson embark on the next chapter of their dangerous journey. It takes you to an island brimming with the undead, sea power, and Nazi air.

Similar to earlier iterations of Zombies Mode, you can aim to either complete the map’s elaborative ‘Easter Egg’ or test your prowess against never-ending waves of zombies.

Of course, you will have all the required tools to get the job done. These tools include a plethora of Weapons, Pack-a-Punch, Perks, and so much more. Despite all these tools, you need to watch your step, as one small mistake is enough to cost you a round.

As mentioned earlier, during the course of your progression through The Darkest Shore, you will come across waves of terrifying creatures trying to bring you down. Each of these enemies brings devastating attacks but also have weak spots, allowing you to overwhelm them quickly. However, it is important that these enemies are also capable of doing the same to you.

Pest
Pests in The Darkest Shore only spawn during Special Rounds. What differentiates them from other zombies is their incredible ability to chase you and bring you down.

Wüstling
Wüstling in The Darkest Shore is a forced to be reckoned with. The enemy has a Charge Attack that can deal a massive amount of damage in a short span of time. This Charge Attack not only affects players but also knocks away other undead in Wüstling’s path. While facing this enemy, you should always try to aim for its spine, as it is prone to take more damage there.

Bomber
As the name suggests, Bombers essentially like to close in the distance and explode after getting close to the player. One positive thing about explosions caused by Bombers is that it also damages all the nearby zombies. While facing this enemy, you should always aim for the 2nd head behind a Bomber. You should easily see the zombie head holding the bomb. Alternatively, you can shoot them before they are able to close in the gap.

Meuchler
Meuchler is another interesting type of zombie featured in The Darkest Shore. What differentiates Meuchler from other zombies is its Tracking Ability. The enemy can easily spot you through the foggy areas. In addition to this, it prioritizes attacking alone players. Therefore, it is a good to stick close your squadmates when you know a Meuchler is nearby.

Similar to previous Zombies Maps, The Darkest Shore features several Perks that you can collect to gain an advantage over your enemies. Perks in The Darkest Shore can help you emerge from a sticky situation unscathed. However, one important thing that you should know is that Perks cost a ton of Jolts but are definitely a worthy investment at the end of the day.

In this section of our Call of Duty: WWII Zombies The Darkest Shore Guide, I have not only provided the locations and costs of all available Perks but also their effects.

Lebenblitz
Cost: 500 Jolts Solo | 1,500 Jolts Co-Op
In solo, Lebenblitz automatically revives the players but is limited to 3 uses only. In co-op, Lebenblitz increases the reviving speed of the players.

Laufenblitz
Cost: 2,000 Jolts
Laufenblitz increases your movement speed and provides you with the ability to sprint indefinitely.

Schildblitz
Cost: 2,000 Jolts
With this Schildblitz, you summon a burst of electricity that surrounds you during your reloads.

Kugelblitz
Cost: 2,000 Jolts
Kugelblitz in Call of Duty: WWII The Darkest Shore increases the overall damage output of your weapons.

From Assault Rifles to SMGs, LMGs, Sniper Rifles, Shotguns, etc., the amount of weapons available in The Darkest Shore is amazing. All of these weapons are categorized as Wall-Buys, Mystery Box Weapons, Starting Weapons, and Quest Weapons. If you wish to use a Wall Weapon, you will have to spend a few Jolts.

We will have a comprehensive Weapons Guide in future but for the time being, we have provided a complete list of weapons in The Darkest Shore, their category, cost, etc. Another important thing that you should know is that upgrading a weapon using Pack-a-Punch changes its name.

Gewehr 43 (Barbarossa’s Strike)
You can acquire Gewehr 43 from a Mystery Box.

Grease Gun (The Greaser)
You can buy Grease Gun as a Wall Weapon for 1000 Jolts.

Sten (La Resistance)
You can acquire Sten from the Mystery Box.

Orso (The Boot)
You can acquire Orso from the Mystery Box.

MG 15 (Chatterbox)
You can acquire MG 15 from the Mystery Box.

Bren (Ronnie)
You can acquire Bren from the Mystery Box.

GPMG (Good Enough)
You can acquire GPMG from the Mystery Box.

Sniper Rifles
Lee Enfield (Smiley)
You can buy Lee Enfield as a Wall Weapon for 1600 Jolts.

Karabin (White Death)
You can acquire Karabin from the Mystery Box.

Kar98k (War Model)
Kar98k is your Starting Weapon in The Darkest Shore.

9mm SAP (Grey Ghost)
You can acquire 9mm SAP from the Mystery Box.

Shovel
The Shovel is your Starting Weapon in The Darkest Shore.

Ripsaw
Ripsaw is a Quest Weapon. We will have more details on it soon. Stay-tuned!

Power-Ups
In addition to Perks and Weapons, The Darkest Shore also features a handful of Power-Ups that can change the outcome of an encounter. However, as opposed to Perks, you can acquire Power-Ups by simply killing zombies and picking them up. Alternatively, you can also use some Consumables to gain the same effects.

Toten-Griff
This Power-Up basically allows you one-shot all available zombies on the map.

Elektromagnet
With this Power-Up, you get twice the amount of Jolts for 30 seconds.

Vernichten
This Power-Up is like MOAB from earlier iterations of Call of Duty games. It essentially allows you to instantly kill all the zombies on the map.

In order to unlock locked characters in The Darkest Shore, you need to complete specific challenges. If you wish to unlock all the character, here is what you need to know do.

Bloodraven Hunter
You need to collect all the parts by killing Treasure Zombies found on the map.

The Hunter from Seville
You need to acquire the Pommel before Round #13 and within 35 minutes in The Darkest Shore.

The Mountaineer from Ural
For this, you need to acquire the Pommel without unlocking Uberspregen, without acquiring Armor, and without any Blitz buffs.

Bloodraven Survivalist
For this, you need to escape The Darkest Shore solo, acquire the Pommel, and survive for 40 rounds.

Deathraven Survivalist
For this, you need to survive 40 rounds without downed players, without turning on power, and without any Armor.

Survivalist from Hanoi
For this, you need to escape The Darkest Shore, escape it before Round #13, and in under 40 minutes.

Bloodraven Slayer
For this, you need to destroy every Destroyer without missing a single one, destroy a Stuka with a Fliegerfaust, and destroy 15 Bombers in the Mine Cart Tunnels without taking any damage.

The Slayer from Casablanca
You need to escape The Darkest Shore without unlocking Uberspregen, escape without acquiring Armor and without any downed players, and open the Corpse Gate before Round #5.

This is all we have in our Call of Duty: WWII Zombies The Darkest Shore Guide. Remember that our guide is still work-in-progress. We will continue to update it and try to include all the possible things. In the meanwhile, you can let us know if you would like us to add something to guide by taking it to the comments section below!