The Witcher 3 The Creature From The Oxenfurt Forest Walkthrough 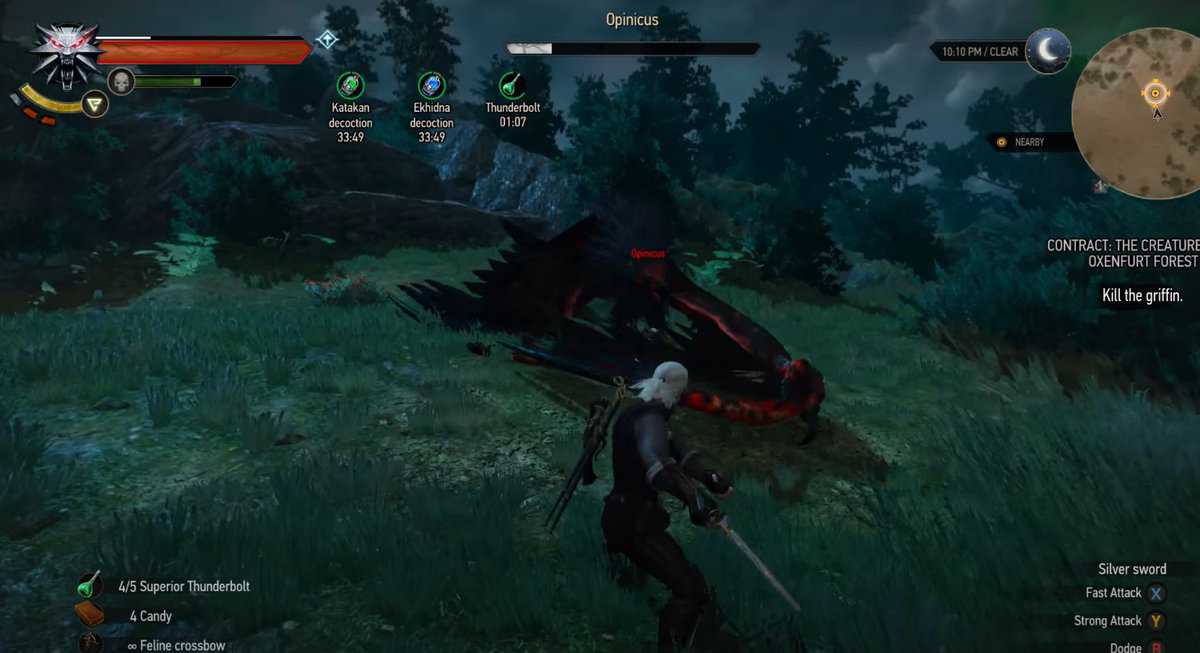 The Creature from the Oxenfurt is a contract side quest in The Witcher 3 as part of the various monster hunts in the game. In this, you will face an archgriffin beast called Opinicus. You can get this quest from the notice board in Oxenfurt Forest, which is just southeast of the Herbalist’s Hut.

While progressing through it, you must complete many objectives before encountering The Creature from Oxenfurt Forest in The Witcher 3: Wild hunt.

Before starting the Creature from the Oxenfurt Forest quest, you must know how you will get it. There are multiple ways to start this contract quest in The Witcher 3, and below we will tell you these, along with other details about beating the Creature.

How to start Contract: The Creature from the Oxenfurt Forest

You can get The Creature from Oxenfurt Forest contract through three different ways in The Witcher 3. The first one is by heading to the notice board in Oxenfurt. Secondly, you can directly go to Hans’ camp and talk to him there to get this quest.

The third method to get this quest is a bit tricky. You must first locate the archgriffin’s nest while exploring the world map in TW3. Once you find the nest of the archgriffin, the quest will automatically start.

The Witcher 3 The Creature from the Oxenfurt Forest walkthrough

After getting the quest, your first objective is to head to mercenary Hans and ask him about the notice he posted. During the conversation, he will tell you he knows of a beast that needs slaying. He will tell a little story about his two mercenary friends, Gerd and Henk, who died while trying to take out the beast.

After that, when you choose to complete the quest, he will hint at the location south of where you are currently standing. This will start the second objective of this quest.

Examine where the monster attacked using your Witcher Senses

After reaching the location that Hans told you, use your Witcher Senses ability to examine the area. While examining the site, you will discover it is a flying monster. Now all you have to do is start following the blood trail, which is also the third objective.

While following the blood trail using your Witcher Senses ability, you will also encounter some wolves, so be prepared for that. Take out the wolves and again start to follow the trail. After moving a little forward, you will notice that the blood trail suddenly ends. This will start a new objective in which you must follow the Ravens instead of the blood trail.

When you start following the ravens, you will get towards a mountain. Climb up a few levels and find the griffin’s nest. If you visit during the day, you will find nothing except some blood remains.

Return after dark, when the griffin is in its nest

If you want to find Griffins in the nest, you must return at night. You can do meditation and wait until it gets dark. You will face the griffin Opinicus right after dark, and your objective will change into Kill the griffin.

In order to defeat the archgriffin Opinicus in The Witcher 3, the strategy is pretty simple. All you have to do is dodge its attacks while it is in the air and try to land some critical hits as it lands on the ground. When Opinicus tries to attack you from the air, you can use the Quen protective shield to block its attack.

Silver Sword is best to deal severe damage to this beast on the ground. You can roll around the beast and continue to hit it with your Silver Sword to deal as much damage as possible.

You can also use the Feline Crossbow to deal some damage to the beast in the air. The crossbow will also help make the beast fall on the ground if you attack Opinicus right when it tries to attack you from the air.

You can let the beast come towards and as soon as it gets close to you, attack it with the Feline Crossbow and roll away. The beast will fall to the ground, and you can use Silver Sword to land some critical hits.

Continue doing that repeatedly, and the griffin will be out in no time. Once the Creature from the Oxenfurt is down, you can loot the archgriffin trophy, Zireael armor, and archgriffin mutagen from its body.

Collect your reward from Hans

Now return to Hans and collect your reward, 300 XP and 221 Crowns. Another possible ending for this quest is if you find Griffin by accident before starting the quest. In that case, you can return to the notice board in Oxenfurt Forest and take the contract to kill archgriffin Opinicus from there.

Afterward, head to Hans and tell him that you have killed the archgriffin and get 300 XP and 331 Crowns, which is a better reward.