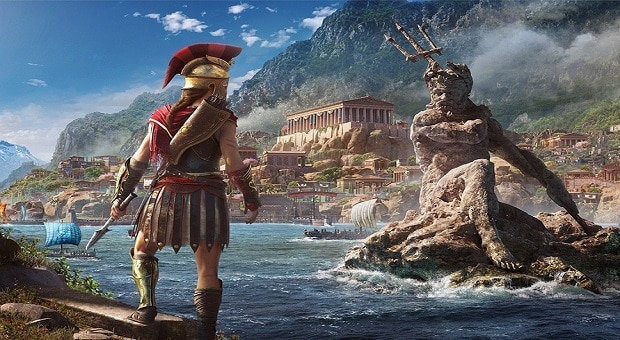 The hottest of the hottest topics of discussion these days is the upcoming game, Assassin’s Creed Odyssey, one of the most anticipated game franchise, of the era. Lately, there has been so much about the game that has been discussed by fans that, we are not sure what is actually going to take place in the game and what is not going to take place. Keeping that in mind, in a recent interview the game director, Scott Phillips was asked a lot of interesting questions, to which he gave some interesting answers. Among them, was one of the most interesting question that, will the players meet the Greek gods in Assassin’s Creed Odyssey?

This is a question which seems to have been plaguing the Assassin’s Creed community for quite some time now. We are aware of the fact that Ubisoft has always blended the history with reality in a very delicate manner. Although now they have jumped far to back in history, which is not only a grueling task but a huge risk as well.

To be honest they have jumped back about 2500 years into history, which they have not done before, although seeing the E3 2018 trailer the game may seem charming and all, but pulling a task of such magnitude seems to have raised a lot of questions. However, since it’s Ubisoft we can surely have a little faith, that they are definitely going to pull it off.

Now keeping all that has been said into context, this is what the game director Scott Phillips, had to say when asked about ancient Greek gods and myths in the game?

Being in Greece, we can’t not have references and deal with the gods in mythology. It’s core to what people thought and believed and how they lived their lives at the time. I think players will be happy with the way we’ve woven that with the Assassin’s Creed First Civilization legacy. I think it’s a great connection between the two.

So that’s pretty much a definite maybe which means, that players can surely expect such Greek mythology to cross lines with the original story of the game. After all, Ubisoft has always left a fine line, connecting with the mythology, faiths, and beliefs in all of their games.

With all that said, Assassin’s Creed Odyssey is scheduled to roll out sometime in 2019 across PlayStation 4, Xbox One and PC.