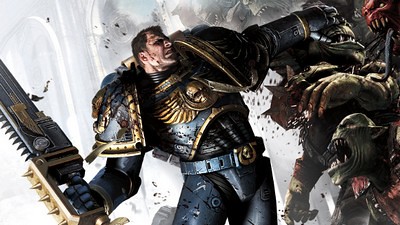 Warhammer 40K Space Marine multiplayer is based on two game modes. One is a typical team deathmatch and other is like domination game mode which asks for capture and hold strategy. There is also coop but that would be added to the game as DLC.

Annihilation
The typical “TDM” mode. Race to 41 kills for winning.

Seize Ground
The famous “Domination” mode. Work together, capture and keep hold of specific areas to gain points, the team with the more points wins.

The maps are all taken from the campaign scenes. These are industrial locations and full war-zones. One map is on a wrecked bridge and other is on a factory. Almost all the maps have interior and open areas, the jump-packs of the assault class are totally useless in the rooms which have a low height.

You can choose from a variety of perks to enhance your abilities and effectiveness against your enemies. Each perk has its own advantages. There are two types (class and weapon perks) Players below level 15 can choose a single perk where as those who are above may choose two. You can read our Perks Guide for more insight on class and tactical weapon perks.

Read our Space Marine Weapons guide for all the insight on weapons that you can unlock at different levels of Multiplayer mode.

The Class Guide will provide more insight on each distinct class in Warhammer 40000: Space Marine along with what you will have at your disposal as you play more of that class.

You can customize your character’s appearance and make your own unique appearance using in-game customizer. It is unlocked at level 4 though (by unlocking all classes). There are number of paint jobs, you can change the appearance parts too (the helmets, greaves, shoulder plates, armor etc.)

You can also add different symbols to these parts or color them the way you want them to be. It has been confirmed that you have 18,000,000,000 different combinations to choose from. Some pre-built good-looking combinations are also there.

This is the DLC only cooperative mode. You spawn with 3 more players into an arena which will have constant waves of enemy attacks. You get score by killing them, the level finishes if all of you die.

There are two main missions, but different arenas are unlocked once you go through each of them. You must go through a particular area to get access to the next one.