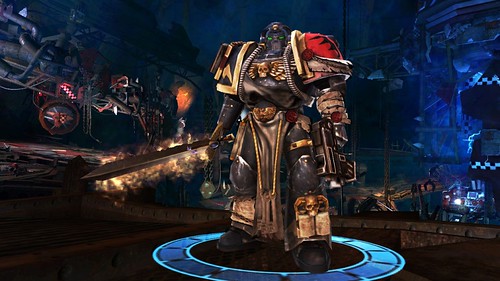 If you thought Warhammer 40,000: Space Marine was a strange enough name, the upcoming spin-off of the title is going to make you go like ‘what?’ even more, unless I’m the only one who finds these appellations odd. Warhammer 40,000: Kill Team is, as stated above, a spin-off of Space Marine, and is a downloadable title costing only 10 bucks, or 800 Microsoft points for Xbox360.

Kill Team does actually stand out as a competent twin-stick shooter, despite being a tie-in for the real deal. It deals with stuff that happened a little before the events of Space Marine; a large group of orks is found in a certain spaceship called the Ork Kroozer (why does everybody love K’s?), and your job is to go in and eliminate them all.

You can do this by choosing up to four different kinds of marines as your player. The options consist of ranged fighters like the Sternguard Veteran and Techmarine, while the melee classes include the Vanguard Veteran and Librarian.

Each class comes with a loadout which consists of a main weapon, a side arm, and two perks that will increase player stats and which can be changed between missions. Additionally, you’ll also see those ultra-powerful classic 40,000 weapons such as the chainsword and power sword. In fact, getting the power sword in Space Marine will actually require you to have played at least one level of Kill Team. Funny how it works eh?

The shooting mechanic is still an integral part of the game, but with all the cool melee weapons available, it’s quite easy to ignore the shooter aspect of the game and go hacking and slashing. But when you do actually select a non-melee weapon, the twin-stick shooter aspect really comes to life.

You move around with the left thumbstick and aim with the right, blasting away waves and waves of enemies. After slaying enough bad-guys, you unlock an ultimate ability which is different for different marine-types.

The experience is, of course, not as easy as it seems, and only becomes as simple as stating it once you have killed enough enemies and gotten more powerful. The co-op will allow you to breathe a little better, but all in all it is a challenging and engaging experience.

To be honest, it’s a game that is bang for buck – something you wouldn’t mind playing for an hour or two with a couch companion with you. Playing alone might honestly not be too enjoyable, but its well worth having Kill Team in the casual section of your collection.

While it may not be the biggest title, or a game to talk a lot about, it definitely portrays itself as the first step to something much bigger and better.