WarFrame Interview – State of the Game! 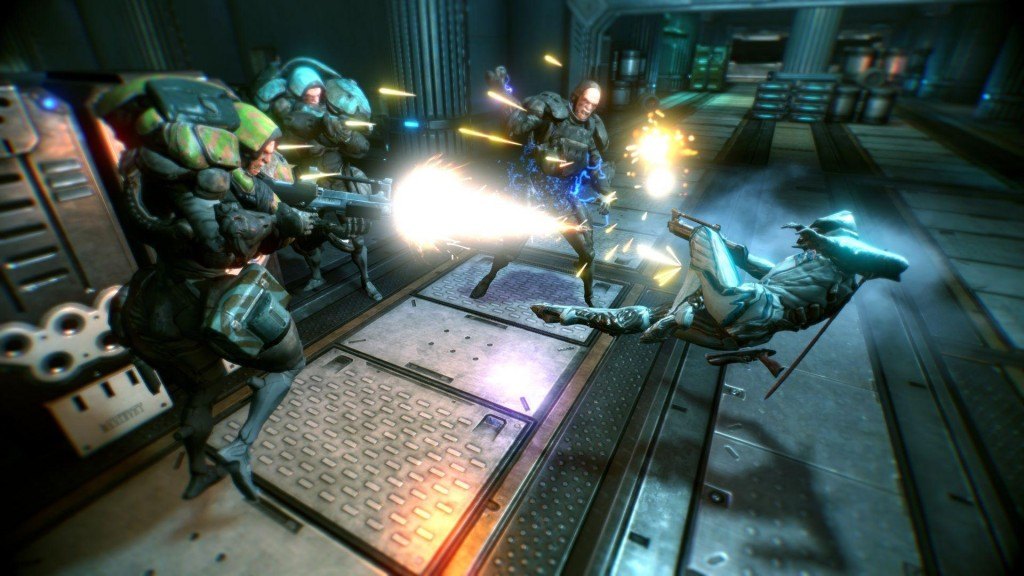 Digital Extremes’ free-to-play cooperative shooter WarFrame finds you in the midst of war with the Grineer and Corpus. Waking up from centuries of cryosleep, it’s up to you (a tenno) to use your advanced technologies in turning the tides of the great war.

Dave Kudirka, producer on the game sat down with us this week to give us an insight on the game and some of its recent changes.

Your studio has co-developed on a bunch of different IP’s, what is it like to work on your own IP, with games like Dark Sector and Warframe?

Dave Kudirka: Working on our own IP is nerve-wracking and exciting at the same time. On the one hand it’s very liberating—choosing our own direction, developing our own ideas and executing our artistic vision with no external negotiations required. On the flip side, a lot of things have to go your way for a new IP to succeed among the other established franchises, so carving our own path is a huge challenge.

With the addition of new stealth takedowns, it seems as if your development team is working on the stealth aspects of Warframe. What other additions to stealth gameplay can we expect to see down the road?

Dave Kudirka: So far, we’ve only scratched the surface of stealth gameplay, but we absolutely have much larger plans to expand stealth functionality and covert team-tactics in the future. Part of being a ninja is hiding in the shadows and creeping around undetected. We have more work to do with our AI and our level creation to support that game style fully, but we certainly have all the tools in the box to make that happen.

When making a massive change, like with the new mod system, you inherently run the risk of alienating your audience. How do you, as developers, minimize that risk, and help alleviate any concerns your fans may have?

Dave Kudirka: Massive changes can be risky business, and the last thing we want to do is alienate those players that have been so supportive through early development by changing the ground under their feet.

With the new MOD system, we were counting on some negative feedback, but we were ultimately confident that we were making the right move.

To minimize the risk we did our own campaigning in the forums before and after the change, and poor Steve, our project director was ready to backtrack after the first barrage of complaints. But we held firm, waited, and to our surprise we found champions among our player base that approved of the change, andacted as cheerleaders and mentors for anyone having difficulty.

That was totally unexpected and awesome. Through this experience and the Closed Beta in general, we have found the more transparent and honest we are with our player base the more understanding and accepting (or not) they are to change.

One of the most controversial changes in the 1.07 update is this new mod system that you’ve recently implemented. What are the benefits of this system, over the previous one?

Dave Kudirka: The Mod system is something we are really proud of and we’re excited to expand that system as we truck along. First off, it allows deeper and more varied customization–tracing an upgrade tree was ok, but it was too linear, and choice was limited to the next node(s) available in the tree.

The new system is more like alchemy, where you can experiment with different recipes to achieve a wider range of customization, and with fewer restrictions (no cost to respec your build anymore!).

We’ve also added what we call Mod “Fusion” where combining mods together increases their effectiveness, so hunting for specific mods (based on type or rarity) becomes a little more interesting and satisfying part of the game.

We’ve also tried to make them visually pleasing and collectible with some pseudo-3D sorcery, so when one drops in-game it’s just that much more rewarding.

In my recent playthroughs, I’ve gotten the same rarity of cards in Venus as I have in Pluto. Since I can kill much more efficiently in Venus, what are some of the advantages to playing on higher difficulties?

Dave Kudirka: You have discovered a flaw in our system that we recently discovered as well! We are currently restructuring this system to take into account the level difficulties.

How do you feel about the new mod system? Are you content with where it’s at, or are there more changes on the way?

Dave Kudirka: We are totally jazzed about the new mod system; we think it’s a success. Are we going to expand it and make it better? Definitely! We plan on introducing some really wacky mods at the request of our players—they have some great ideas so we’re going to prototype some of them and see where that takes us.

I’ve noticed that, more so than most games, what the community wants, gets put in your game. What percentage of changes are influenced by the community, in comparison to just pure coincidence?

Dave Kudirka: It was our mandate from the start to make this game with our community of players. Sure, we reserve the right to make the final call, to protect our IP, or to do what we think is best for our project and studio, but ultimately we want to provide a service, a hobby if you will, to those that support us. So we take support tickets personally, we comb the forums, and we watch the global chat to see how we can serve our players better.

When they tell us they want a two-handed battle axe we just do it, some of the other requests require thoughtful debate—but the point is, we thrive on user feedback because unlike a shipped title, we can keep improving on what we have.

When playing Warframe, I feel like a space ninja wearing a suit very reminiscent of animes’ such as Evangelion and Guyver. What were some of the artistic and gameplay influences for your game?

Dave Kudirka: We draw heavy artistic influence from Anime, Japanese kit-bash modeling, ninja mythology, Arthurian legend, Heavy Metal magazine, and the list goes on. We want to take sci-fi in a different direction and mix a bit of the old (Japanese ninja mythology) with some new ideas of techno-organic super-powered combatants.

The gameplay follows the artistic influence by sticking to ninja themes of espionage intrusion, and assassination, and so we just continue adding more ninja moves like wall-running and shooting enemies while doing backflips out of the shadows.

Due to the fact that energy orbs are random, I find it difficult to plan around and manage the energy resource. Have you ever considered using a different resource system for abilities? If so, what were they?

Dave Kudirka: We are not currently trying anything else with this system.

Now that 1.07 is out, what’s next on the horizon for Warframe?

Dave Kudirka: Without giving too much away, we’re looking to vastly improve the social aspects of Warframe as well as introducing some forms of meta-competition. Aside from that, you can count on more environments, more enemies, more weapons, and more Warframes.

What’s your take on WarFrame? Is it going in the right direction?