How To Manage Laws In Victoria 3 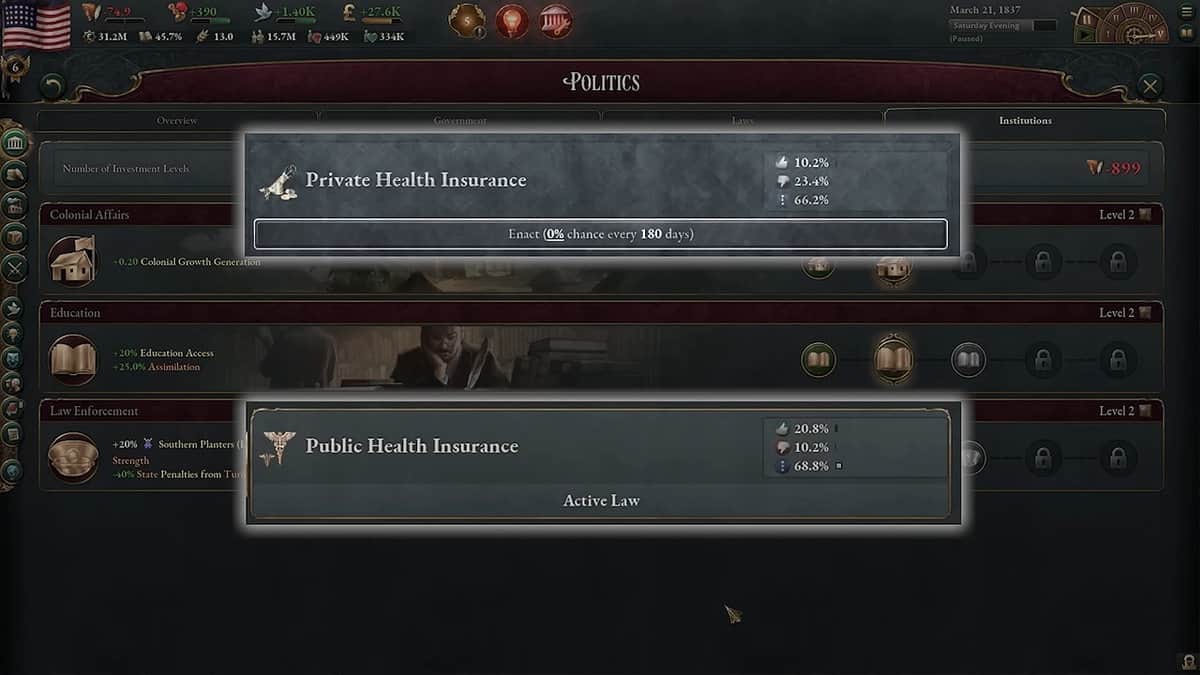 You cannot expect to build a nation in Victoria 3 without having a stable government and the popular vote of the people. Balancing both factors is how you can advance through the industrial revolution.

Victoria 3 has fairly deep systems when it comes to building/managing your country. You do have a ton of options on your hands, each of which can be further affected by passing laws in the game.

Laws come under the politics tab and are incredibly important for your progress. Passing the right laws can, for example, increase your income or reduce the chances of a revolt. You can pass laws to boost a certain industry like education or manufacturing.

That being said, passing laws is more than just clicking a button. You might need to convince your government and sometimes, a law you want might even be removed from the docket. The following guide will tell you more about passing laws in Victoria 3.

How the law system works in Victoria 3

You can find the Laws tab from inside Politics in the main menu. You will then be able to see all available current laws of your government. These will be further divided between various law groups that affect different areas of society.

Heading into any law group will show you the laws you can pass in Victoria 3. However, as stated above, there is no guarantee that a law can be actually passed. It all comes down to your current government, rules, regulations, several other factors, and also other laws that have already been passed.

Each law has an Enact button that lists the chance of it being passed. If a group of government opposes a law, you will have a tough time trying to pass it.

Requirements for passing a law

There are two main requirements that much be filled before you can pass a law in Victoria 3.

The first is a high endorsement rating from the relative governmental body. The second requirement is that the area of society, for which you are passing the law, should be unlocked in the Technology tree.

When both conditions are met, you can pass the law in Victoria 3.

How to pass laws in Victoria 3

Passing a law does not mean that everyone will be happy. It is entirely possible that you start facing a backlash after passing a certain law.

It is also possible that you face backlash before passing the law. You can still pass the law in this case, but you will basically be forcing the law onto everyone. That will create unrest in your country, leading to unhappy governors and people.

Hence, you need to know how to enact a law in Victoria 3 to correctly fulfill the aforementioned two requirements.

While you are enacting or passing a law, there are four factors that must be noted.

You can also enact laws during political movements. Sometimes you can be asked to campaign for a certain law by specific groups or individuals.

You will still need to have the government pass the law but getting to enact a law through political movement can be successful especially when a specific law is popular.

The legitimacy of the government plays a vital role in enacting any law. The higher the legitimacy is the lower time it will take to pass any law. Head of state interest group and government clout also impacts the legitimacy as well. Legitimacy can be increased in several ways and one of the costly ways to do it is to reduce taxes.

One way to get free government reforms that will cause no radicals is through voting. Under the distribution of power if you have one of the laws that allow voting such as land voting, wealth voting, etc. you will actually have elections in your government.

After the election, you will get free government reform. This means the next Government Reforms will not result in any new radicals as long as it is done within the mentioned time limit.

While you are enacting a law, there are four factors that must be noted.

You can also enact laws during political movements. Sometimes you can be asked to campaign for a certain law by specific groups or individuals.

You will still need to have the government pass the law but getting to enact a law through political movement can be successful especially when a specific law is popular.

Some laws in Victoria 3 also enable institutions. Institutions allow countries to provide an assortment of services to their citizens ranging from schooling and healthcare to enforcing the law and policies.

Institutions cost a certain amount of Bureaucracy to enable upgrades which are based on the population count of the incorporated territories in your country.

The laws on the politics screen let us have a good look at three different categories. Each of these three categories further has seven subcategories each of them containing a list of laws. The three law categories in Victoria 3 are as follows.

Power Structure category affects what pops can vote, what pops are discriminated against and even the structure of your government itself. It has further seven subcategories.

The economy category controls the laws covering your nation’s taxation and trade policies, expenditure on healthcare, schooling, policing, and even colonization policies. Following are the seven subcategories that fall under the shadow of the economy.

As is evident, this category of laws covers areas for human rights such as freedom of speech, working conditions and rights of different groups in your population. All the laws are equally important to the lives of your pops. Like the above two, this category also has seven further subcategories.