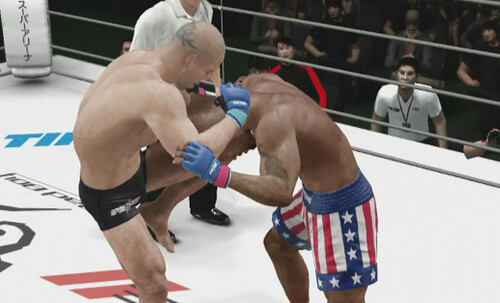 If you are new to the series or are going to play it for the first time, then you might find it difficult to play. To avoid the initial annoyance, we have compiled a few UFC Undisputed 3 Survival tips that should help you get things started.

Following are some of the key points you should keep in mind when starting out UFC Undisputed 3:

Practice, Practice and Practice More!
You probably know it already but in UFC Undisputed 3, you really need to do it practically. You won’t learn any trick in the game without an effort.

The more you play; the better will be your chances to survive in the tougher fights. Don’t hesitate to test yourself at higher difficulties as playing will improve your game more than sticking to the lower difficulties just to have fun.

Don’t Skip The Tutorial
I will highly recommend that you master each section of the tutorial before you start fighting either in single player or the multiplayer.

Even if you skipped it for the first time or have forgotten any particular basic, you can play that section of the tutorial any time you want. Basics should be strong specially considering the diverse gameplay and controls of the game.

Learn To Dodge and Keep Moving
This basic principle applies to many fighting games, and UFC is no different. Blocking no doubt helps a lot but not all the time. Dodging – however, is a better way to protect yourself. For that you need to learn the sway system of the game.

You should sway away at the right moment, neither early nor late. You will still receive some damage if you don’t time your dodge properly, which of course can only happen with practice.

You should also keep moving during the fight. You can move quickly away or towards the opponent by moving your stick back or forward twice. This can be one good strategy to attack the opponent in intervals without any serious damage.

Submission is Important, So Practice It
Submission may feel slightly difficult for the executor while it may sound opposite of the one trapped. While executing a submission, you should try to contain the opponent and when he is stuck, keep away. Both parties, however, have the equal chance to succeed, which makes it an interesting battle.

Clinch and Takedown Can Be Your Saviors
When you are receiving a lot of beatings, a successful clinch or a Take Down attempt can turn the fight in your favor. The time you will get by the Clinch will give you enough time to stabilize your character. This strategy can be really fruitful when you are vulnerable after receiving multiple punches.

Fights Against/Between A.I. Can Teach You!
If you can’t figure out new ways to defeat your opponent, then I will suggest that you watch some fights as a spectator.

Yes, I am recommending you to watch computer vs computer fights. It will help you understand the basic flow of UFC Undisputed 3, And I am sure beginners will learn a lot from this.

Don’t Play Online Till You Know The Basics
It’s better to get whipped by a computer player than risk humiliation at the hands of veteran human. No matter what difficulty you choose, AI will be challenging enough for you to learn new tricks.

Competitive fights are a whole new level, and I will recommend you not to play online until you have mastered the basic controls of the game. Once you are aware of the basics, do play online with different players to get the maximum experience.

You cannot keep the same technique in all fights. You need to always change your strategy, tactics, strikes, takedowns, and transitions.

Mixing up your attacks is the best technique that you can use in your fights as what doesn’t work in one fight might work in the other.

Be completely unpredictable and don’t use the same attacks every time otherwise the player is going to be prepared for it next time.

How to handle in the Octagon

When you are in the middle of the Octagon, using range-finder punches and kicks keeps the aggressor at bay. You can set up some collar and Thail clinches which can be damaging when the opposing fighter is pushed against the cage. You have to be mobile all the time and make sure to save yourself from long exchanges.

It is very important to know the rules of a fight before you go and join it. This includes all the attacks allowed in the fight along with the timings and other technicalities of the fight.

You need to know about the benefits and disadvantages of competition settings.

Your stamina plays a big role in the fights. If your simulation settings are activated then you will have much less stamina than normal.