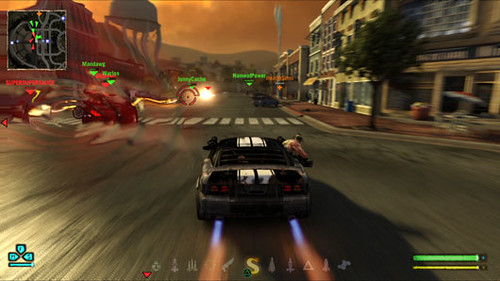 Twisted Metal features 16-player online (8 Vs. 8*) battles. You can play free-for-all, team bases or an objective based battle.

If you don’t enjoy public battles, you can play two or four-player offline split-screen with your friends at your home. Either way, Twisted Metal multiplayer offers plenty of fun and nostalgia.

Twisted Metal also gives you bragging rights by monitoring your statistics via your profile given that you are good enough in the game.

How To Find Public Games
The online servers are shown categorically in the Games section of the multiplayer. You can easily differentiate between the servers as their name, game type, map and the numbers of players are shown.

If you are not in the mood to play a specific game mode, then you can simply use the filter to display the results per your needs.

How To Host Your Game – Server Setup
If you’re interested in playing with your friends or want a server with everything as you wish it to be, then you can create a server of your own.

The game mode, ranked or not and some various settings are the basic options of the server. The difference between the ranked, and the non-ranked servers are that you can edit everything in the latter while there are some restrictions to the former.

There are three categories (Free for All, Team Bases & Objective) and then their types are further divided:

Death Match
Simple, shoot everything which moves. There are no team-mates or friendlies in this game mode, you will have to kill every player around you. The player with the most points at the end will win/top the map. The weapons and the vehicles can be changed before every re-spawn.

Hunted
All the rules are same as they’re in the Death Match, but the only thing which is added here is the bounty/special objective.

A random selected player will be called as the HUNTED player, and he will have a big mark above him. Kill the hunted to earn points but in turn, you will be one hunted by other players.

Last Man Standing
The name says it; you only have one life in this game-mode. It’s similar to the Death Match, but you will not re-spawn. The last alive player is the winner, if there are more than one players alive and the ten-minute time limit is over, then it’s a draw.

Team Death Match
The players are divided into two teams, the team with the higher kills after the 10-minute wins. You can change your weapons before respawning.

Team Hunted
The team hunted is the mixture of the hunted and team death match, you will have to act as a team and protect your HUNTED player by killing all the enemies.

There will be a HUNTED player in the other team too, you will have to kill him to get a point. The team with the most points at the end of the time will win.

Nuke
Twisted Metal has introduced a new game-mode into its multiplayer side. The objective is pretty simple; you have to destroy the statue of the opposite team by firing nuclear rockets on it. One game has a total of three innings, so each side will have to defend and attack thrice.

The nukes must be triggered and then launched by capturing one of the two faction leaders first (simply run over him/her and it will attach to your car).

Note: The rocket’s controls are vertical, and it will self-destruct if you fly it beyond the map limits. The team with the most points at the end of the match will win.

If you are starting out on Twisted Metal series, you should keep in mind the following pointers while playing the game:

Turning/Brakes
The driving mechanism is quite good; you will not be able to make a proper turn if you keep on accelerating and try to turn the car. Sharp cuts are only possible if you stop accelerating or press the brake, this is mostly dependent on the size/weight of your car. Faster cars will have a better turning usually.

Turbo/Dashing
The turbo is not only for a better acceleration, but the faster acceleration will help you in causing more damage to other vehicles too.

Pickups
There are various pickups throughout the tracks. You will have to pick up the items (includes Weapons, Side Arms, Energy Attacks, etc.). The weapons by default are not enough, so you must pick up other items to survive.

Health Trucks
The health trucks are marked with a red health icon. These trucks are used to restore your health, simply drive into the trailer of that truck and your health will start to restore. There is a time limit to use the truck again.

Garages
The garages are used to switch your vehicles and the Side Arms. The garages are marked as a Green Wrench icon; you can simply enter to change the vehicles.

For a detailed run-down of characters, vehicles and factions in the game, read our Twisted Metal Guide.

To survive the brutal Twisted Metal battles, you will need weapons, and knowing more about your weapons will increase your survivability. Read our Twisted Metal Weapons Guide for that.

Read our Unlockables and Ranking Guide to learn how to unlock everything in Twisted Metal and how you can level up your character fast and with fewer hassles.