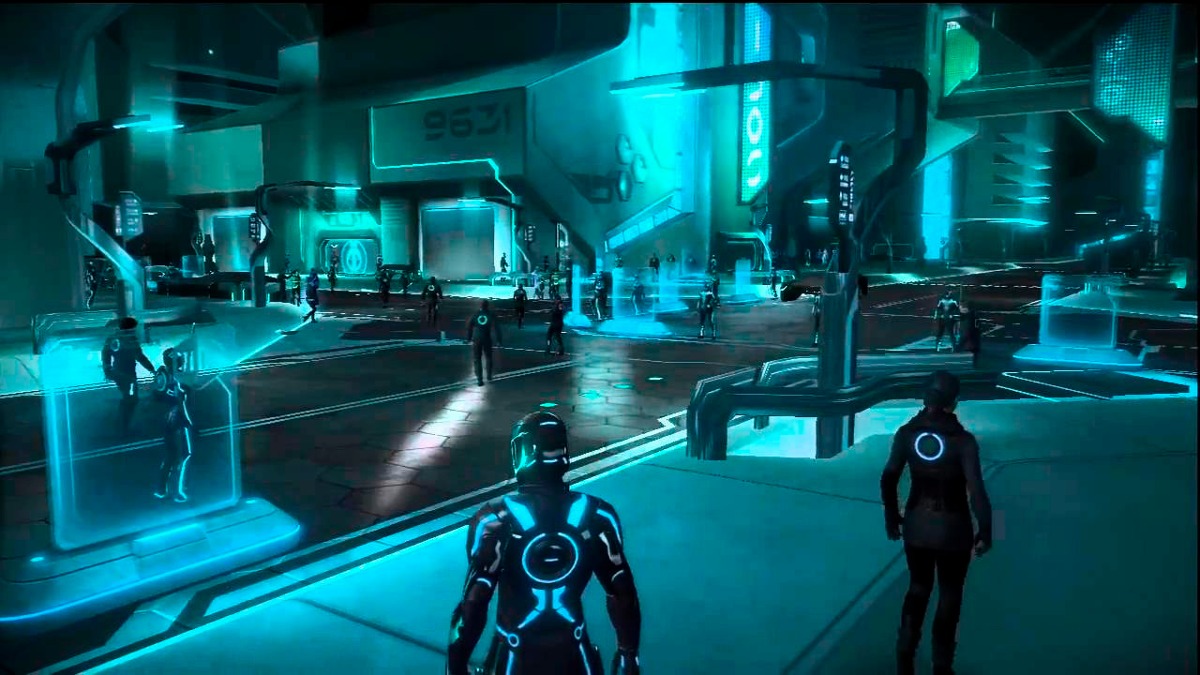 TRON Evolution Abraxas Shards and Tron Files Locations
Read the guide below for locations of these collectibles in the game with brief descriptions:

Tron File #1
When you throw your disc at the switch to make the floor appear, and exit through a door. The Tron File is right in front of you.

Tron File #2
In the room suspended in the air where you learn how to fight, and fight the yellow and black female enemies.

Tron File #3
When you leave the rounded room full of corruption with a terminal in the middle, exit the new door you just opened, and the file is suspended in the air in front of the jump spot near the statue.

Tron File #4
In the big room with orange and black enemies, it is near the top of the room on a platform. A cut scene when you enter the room will also show this file. Jump and grapple through the room till you reach the top to get this Tron File.

Tron File #5
Once you have defeated the enemies with Shields, you will see ‘Exterior Maintenance Terrace 43’ across the screen. Keep going forward and use the grapple point to reach the file.

Tron File #6
Once on the cycle drive into it, and it will come up quick. Drive for a few seconds and you will find it to the middle right.

Abraxas Shard #1
Jump off the energy objects and fight a few more enemies. Now get to the platform above you and collect your first Abraxas Shard.

Tron File #7
After you have collected the Abraxas Shard above, you will be jumping a few platforms outside. You will come across a grapple leading to the Tron File.

Tron File #8
At the station near the end of the chapter. Go at the back of the platform during the boss fight and you will find it to the left.

Abraxas Shard #2
In the room you fight the first batch of yellow enemies, it is above the door with a staircase. Run up the door and get on the ledge or run and jump over the railing next to the door, up to the glass and jump up to it.

Tron File #9
After the first cutscene run up the wall to get into the vent and you will find it at the top right. Wall is located by the disc station, and you can’t miss it.

Tron File #10
After you go to the door and get the new objective to infiltrate Arjia City, you will find it right above you. Run up the thin pole in front but, be careful. If you jump off it, you will die.

Tron File #11
After the cut scene with the bright lady, and fighting some guys in the round area. Take the grapple and make your through around the ledges to the spot.

Turn around before you move on to another ledge, and you will see the Tron File. It is lying higher up in the opposite direction.

Tron File #12
After you leave Arjia and kill enemies in theater, look to your right for a spot to run up the wall. You will see the Tron File high up there.

Abraxas Shard #3
After you are done in theater, you will come to a room with people running from enemies. Abraxas Shard is on a ledge in the back left of the room, run up the wall to get it.

Tron File #13
Near the beginning of the level, off a ramp on the left.

Tron File #14
Keep moving forward after you have collected the above Tron File. You will eventually come to a ship dropping at the center of the road.

Tron File #15
After you are off the cycle and get to the game grid zone, go past the disc station and go down the stairs. Jump pillars in the area you hit the switch to move the drill bit.

Make your way to the right near a grapple point. Tron File is on the upper right area.

To get it, jump down the enemies, and run to the grapple from the ledge below. Take left first, and kill the enemies before taking on the second grapple point leading to the Tron File.

Tron File #16
In the room after the elevator with all the grapple points. You will eventually get to another disc station and a vent you can go through, right to the upper left of it.

Tron File is to the right of the vent suspended in the air. If you go through the vent, you will miss it.

Tron File #17
After bombing the pillar, traverse few more ledges till you are up on the main section. Bomb the blue section of the wall in front of you to get the Tron File.

Tron File #18
In the hair where you find alongside green guys with hair spikes, kill the yellow guys and a cut scene will start showing that the corruption is off the wall. Now you can use the wall run. Go through the door on the left and you will see the Tron File.

Tron File #19
After you have shut down the reactor, come outside and it’s to the left on the ledge by the green glowing line on the wall.

Tron File #20
Once you are on the cycle, drive a bit and you will eventually get to a small tunnel. Tron File is in there.

Tron File #21
When Gibson changes to green, don’t hit him. Instead, go to the right side facing him and climb up opposite to where Abraxas Shard is, toward the energy bar. Go to the corner and you will see the Tron File, wall run to get it.

Tron File #22
Once Gibson has been defeated, move forward and reach the top. You will get an objective “Find the Outland Highway”. Now just after the Disc Station, wallrun the right wall and you will find it straight ahead.

Tron File #23
During the cycle area, you will have to jump up to a broken road ahead with some blocks followed by another of the same. Jump to the center of this road ‘centerline of the road’ to get the Tron File there.

Abraxas Shard #4
When the screen says “depot K deck”, kill the yellow enemies to remove the corruption from a switch on the wall. Now, instead of using it, use your bomb disc and below the section of the wall to the right of the switch to get this Abraxas Shard.

Abraxas Shard #5
When you are fighting infected Gibson, run, climb the wall, jump back to the only pillar on the higher level. Go to the opposite side to the energy bar on your screen to get this abraxas shard.

Tron File #24
On the central pillar, start of the level. Right in front when you walk into plaza.

Tron File #25
It’s on the middle pillar on the right, as you look at the orange energy barrier in the arena before you fight Abraxas.

Tron File #26
When you are fighting abraxas, it’s on one of the upper energy paths.

Abraxas Shard #6
When Abraxas fight starts, run straight across arena; wall run the vertical energy bar in front of you and jump back to grab the orange hook. This hook will swing you right into Abraxas Shard.

Chapter #7: End of the Line

Tron File #27
Go back up some rocks and keep looking to your right. You will need to jump and hop up the ledge to get this Tron File.

Tron File #28
Take the top path in lightcycle, and you will find it in the first tunnel.

Tron File #29
Defeat the enemies you encounter on the Regulator. A bridge will appear, cross the bridge. Now you have to do a series of handholds after two initial wall runs.

After this sequence, two enemies are ambushing. It is up to the right as you land on the platform where enemies are waiting for you.

If you collect all these Abraxas Shards and Tron Files you can earn “Ah, Now I Get it” Achievement/Trophy for collecting all the Abraxas Shards, and “Tron Aficionado”.