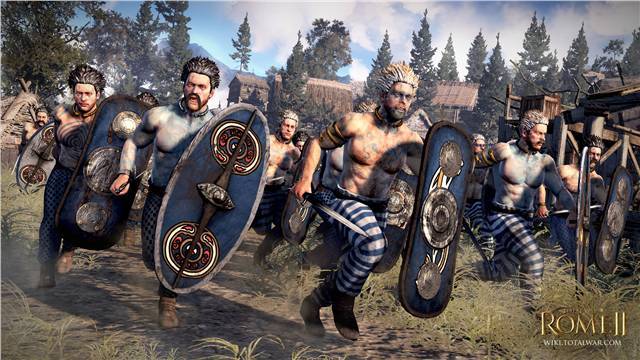 The Iceni tribesmen proved their battle prowess in the early periods of Roman occupation of Britannia. Though the faction lacks some prowess when it comes to sea, they have great ability in land battles with their aggressive units and cavalry.

The Iceni cavalry is majestic and stronger than most other factions’. Additionally, they have chariots available that allow them to nullify enemy elephant units and disrupt other’s calvaries.

The Iceni have two artillery ships available to them. This battle ships carry heavy artillery that can be launched on enemy ships and enemy units from the shore.

Though the Artillery ships are excellent long-ranged heavy support units, they are quite slow and very susceptible to enemy attack. For this reason, they should be guarded by at least one small unit to prevent them from being ambushed/sabotaged.

The Iceni Chariots are high-morale sword-wielding carriage-riders with fantastic turning radii that can disrupt enemy forces, including enemy cavalry and elephants. The Iceni Chariots have good defense, fantastic weapon damage, excellent health and a great base morale, making them very reliable.

The Chariots are great ambushes and like the cavalry units can utilize forest and hill regions and hit enemy units from the flank. They severely cripple enemy morale and can disrupt most units because of their turning radius, speed, and agility.

The field artilleries are medium-ranged artillery units that can move around in the battlefield. They are ideal when used in offensive land battles and can deliver devastating collateral damage to infantry units.

The range of the field artillery units is slightly lower than that of Fixed Artillery units, but this downside is compensated by the fact that they can be moved around.

However, Field Artilleries are very weak against melee attackers and invaders, and should only be moved from and to places that have been secured already. It is usually best to use field artillery units in places where there are little flanking chances for the enemy and where you are going to slowly push forward.

Fixed Artillery units defer from field artillery because they are heavier and not moveable. However, they have a much greater range in general and also tend to have much more damage. But since Fixed Artillery units are not moveable, they are ideal for defensive purposes where you must hold the line against enemy attack, unlike the field artillery that is ideal for offense.

The Giant Ballista is the most powerful artillery unit available to the Iceni, and is very effective against most enemy units. Artillery works best against Pike and Infantry units, and also at times against ships if enemy invasion is from shores.

The Iceni melee cavalry is among the most powerful in the game. Apart from the lightweight Briton Scout Riders, the two other cavalry units have very high base morale, fantastic health, and good weapon damage, making them a central part of the Iceni faction’s army.

Cavalry units work best when used as ambushers, utilizing nearby terrain to conceal themselves for a surprise attack.

The Iceni cavalry is no different in this manner, and because of their high base morale and good charge bonus (temporary boost to attack while riding) they can disrupt enemy forces and create gaps for your other infantry units to utilize.

While the Iceni faction may not have as much variety in its melee infantry as Rome, it definitely has a more determined set of units that are aggressive, passionate, and determined.

The Iceni melee infantry units rely more on their aggression and high base morale than on defense, and with their strong willpower can intimidate and scatter enemy forces.

I like to use the Iceni melee infantry in combination with the cavalry for a guerrilla styled warfare. This is where the Iceni work best.

The melee infantry can combine with the missile infantry to initially harass enemy units, and after allowing them to take action, they can be ambushed by cavalry and chariots, and then further crippled with the heavier infantry units.

Apart from the Heroic Nobles, the melee infantry units are fairly cheap, which makes recruiting quite easy as an Iceni General.

The Iceni are not known for their ships, but they still have some good enough melee ship units to give enemies a hard time. Melee ships are vessels that carry your melee infantry units, and are effective ways to board and sabotage enemy ships during battle.

However, this needs a mix of speed, defense, stability, and boarding time, for which reason it is important to determine your priorities during sea sailing.

Though the Persian Assault Teteres looks like the obvious winner due to its heavy defense and large capacity, it lacks in speed and has slow boarding time, making it tedious to get close to enemy ships for an assault.

So, it really boils down to priorities of what kind of ship you want and what your playstyle is.

Unfortunately, the missile infantry of the Iceni faction is its main weak point. They do not have any formal archers, but only javelin wielders and slingers with average range.

These units can best be utilizes in close range and to harass and disrupt enemy forces, after which your main units should move in. Overall, the Iceni missile infantry is the faction’s least interesting unit system.