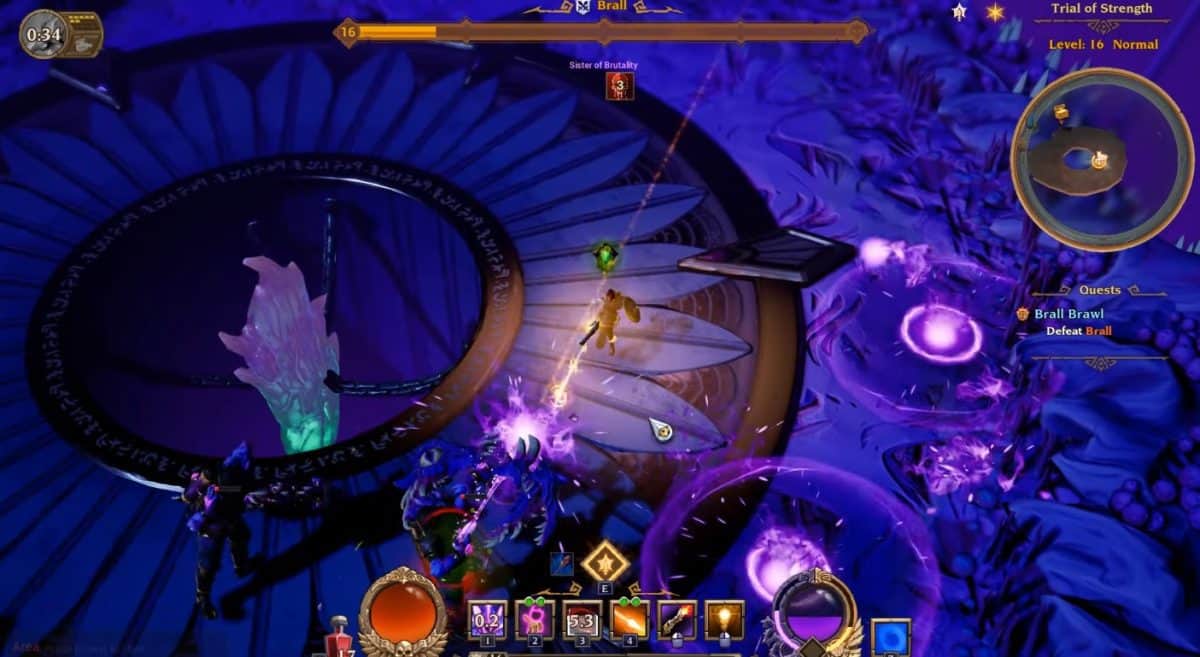 Torchlight 3 Brall Brawl Walkthrough details each and everything you need to know about the Brall Brawl quest so that when you decide to give it a go, you are aware of all the steps you have to take along the way.

To begin the Brall Brawl quest, go to the Lake Gobdunk, choose a suitable gear for the mission and then, head to the Shattered Void.

Once in the Shattered Void, you’ll be welcomed with a group of Netherlings, eliminating them should be very easy. Remember that your objective now is to reach the Trial of Strength.

Proceed forward to face another group of Netherlings along with some Netherling Scrappers.

Move around, take cover from their attacks using your shield and take them down with the help of your weapon.

Next up, you will find a Mimic Chest on your way, shoot it open to collect the retrievable items within.

Your upcoming battle will be with a Netherim Spellslinger, guarded by a herd of Netherlings.

Again, it should be a fairly easy battle to be won if you keep a fair amount of distance from Netherim Spellslinger and let your weapon do the trick.

Once you’re done with it, move forward and confront the strongest of your foes in the Shattered Void, Tha’na, the Herald of Undoings.

Firstly, go for the Netherlings protecting him, after you’ve dealt with them, don’t get too close to him and keep on damaging him using mana attacks of your weapon.

When close to dying, he may teleport once or twice so don’t panic!

Just keep your cool and do not cease to attack him. After taking him down, keep heading towards the Trial of Strength.

On the way, you’ll come across about two dozen more enemies. You’ll find that there are too many of them so it’s better that you let them follow you and when you find a place less crowded with enemies, launch an offensive to make the herd slim.

The last phase of the Shattered Void will take you through a bridge and across from it, you can find the entrance to the Trial of Strength but only if you clear your path first!

Brall Boss Fight
Once inside the Trial of Strength, you will have the final clash with the Boss of this mission, Brall.

Since Brall is awfully strong and is not going to go down easily, this battle will surely put your patience and skill set to the test.

Brall just like other Bosses in Torchlight 3, has the ability to teleport and has various forms of attack up his sleeve. Some of the most common attacks that he uses are listed below.

To emerge victorious from this showdown, your best choice is to maintain such a distance from him that you can steer clear of his close-ranged attacks and target him through your mana attacks repeatedly.

As for his other methods, just keep your eyes wide open and keep dodging (you’re gonna have to do a lot of that if you’re to survive).

When you are finally able to kill Brall, pick up the collectibles nearby and go to Trevail Point.

Talk to General Gaye, followed by Kenik and that marks the end of the Brall Brawl. As a reward, you get 500 Gold coins, 100 Fame points and, either a Rare or a Better weapon.