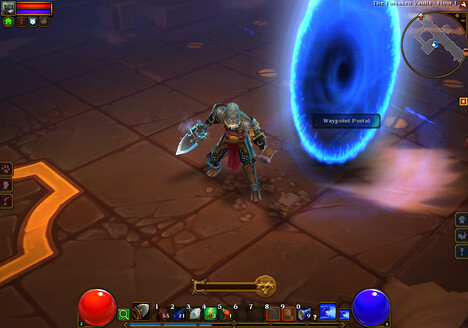 Torchlight 2 Spells work a bit differently than other games. For instance, they are not restricted to any one class like most other games, and this is also the biggest difference between skills and the spells of the game.

Spells in Torchlight 2 can be learnt from special scrolls. A character can learn up to four scrolls at any time, and his/ her pet can learn one too.

You can only have four spells with you at one time. If you want to change a spell, then you need to get rid of one of the spells in your four slots. Be warned removing a spell causes it to be permanently gone, and you need to learn it again for re-equipping it.

You can also teach your pet to cast a single spell. However, the cool downs for the pets are exceedingly long, and their passives do not affect you at all.

Adrenaline Rush (Passive Spell)
When this spell is activated the character’s attack speed, and powers are improved by 10% for four seconds. It can be learnt on level 1.

Animal Handling (Passive Spell)
When activated it increases the power of your pet and decreases it’s town-traveling time. Resulting in a 4% pet and minion Damage, 4% pet and minion Armor and 8% decreased pet town travel time at tier 1.

Blocking (Passive Spell)
It increases the chance of you blocking with your shield by 2%.

Arcane Tools (Passive Spells)
It lowers the number of the levels required for the Embermages to wield staffs and wands. It also increases the damage you do with these weapons by 4%.

Armor Expertise (Passive Spell)
It lowers the number of levels required for the characters to wear armor. It also increases the protectiveness of your armor by 4%.

Barter (Passive Spell)
It grants you an improvement of 3% in vendor prices. It helps you to haggle with the shopkeepers with more effect.

Duel Wield (Passive Spell)
It increases damage by 6% of weapons while dual wielding them.

Retribution (Passive Spell)
Instant attack on the person who damage the mage. It lasts for 12 seconds.

Treasure Hunter (Passive Spell)
It increases your chance of finding gold and magic items on loot drops by 2%.

Heal Self
It heals your health over a period of 4 seconds.

Dervish
When activated this spell increases the casting speed and the attack speed of the character by 30% for 10 seconds. Mana cost: 28.

Fireball
It Launches a slow-moving fireball towards enemies. It does 53-93 fire damage on the target. Mana cost: 13.

Silence
It Silences all enemies preventing them from casting spells in a 8 meter radius. It lasts for 6 seconds.

Rumble
A wave energy radiated outwards meant to destroy enemy shields and such.

Heal All
This spell heals the caster and the allies as well for over 4 seconds.

Frost
Ice bolts that slow down enemies in their 3m explosion radius.

Haste
It increases your movement speed by 8% and your attack speed by 2%. Mana cost: 18.

Summon Archers
It summons 3 motionless archers to fight for you. It lasts for 16 seconds. Mana cost: 28.

Summon Skeleton
It summons a skeleton warrior to fight alongside you. It is A.I controlled and lasts for 37 seconds. It improves your physical damage by 20%. Mana costs: 21.