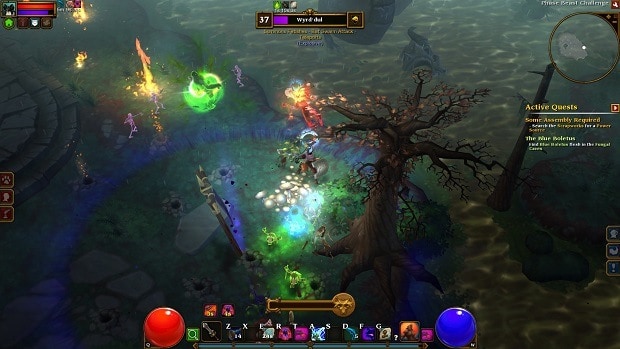 Torchlight 2 is the game Diablo 2 fans have been waiting for, for the past decade. This makes sense, given that Runic Games; the developers behind Torchlight 2 are the very same employees that Blizzard North was comprised of.

It’s hard not to compare Torchlight 2 to Diablo 3, given that Blizzard North (Runic games) should have been the ones developing it. Given the end result of both products, it’s equally hard to wonder why events unfolded the way that they did, that lead to the employees of Blizzard North departing from the company.

Indeed, Runic Games knows how to forge a flawless action role playing game experience When playing Torchlight 2, you will immediately recognize it for what it is, Diablo 2: Remastered Edition. It plays, feels, sounds exactly the way I want it to, identical to Diablo 2.

While the game does get increasingly more difficult as you progress through it, you never lose that sense of being an extremely powerful character. Indeed, the pacing is pitch perfect in this game and is an essential core element to any action rpg. The beauty within this finely tuned experience is that while your foes become substantially more dangerous, your potency never wavers.

This results in a super-fast paced, think fast, react faster gameplay that I find absolutely addicting. Instead of feeling bored and reliant on random number generators, I employ strategies to deal with certain situations. For example, if I just lunge face-first into combat, I’d get destroyed in a second.

Instead of succumbing to overwhelming numbers, I can thin the ranks with powerful AoE abilities that cost a lot of mana, but devastate low hp targets. While I can only cast around three of these before I need to drink a mana potion, it usually only takes one to two casts to clear an entire room of swarm based enemies. With this new-found breathing room, I can isolate and debuff the harder to defeat enemies.

While I do die, I always feel like there was something I could have done better. Deaths are never frustrating, they’re learning experiences that I can reflect on and then improve my play upon.

Another thing that I absolutely love about the gameplay, is that just about everything is dodgeable by simply moving your character.

Projectiles have a set amount of time/distance before they dissipate, so you can use a quick movement skill to get yourself to safety, and then use the same skill (perks of mana, contrary to cool downs as a resource) to nearly instantly get back into the fight to wreck some faces.

I don’t think it’s possible to create a better pacing for combat, than the one found in Torchlight 2. However, I feel as if the isometric view, loot frenzied, action role playing game genre isn’t very fun, without a few buddies to go questing with. While I don’t think this is a bad thing, it is important to note that without friends to slay and trade with, the game does get a bit repetitive.

“Burn, maim, kill, pillage” can only be done for so many hours without friends, before it gets tiresome. The thing is, I’ve never seen an environment more conducive to doing just that, playing with friends. Many games struggle to find that perfect point where playing with friends becomes adequately more difficult, without becoming a frustrating experience. Torchlight 2 somehow manages to pull it off flawlessly.

One of the biggest surprises for me, in Torchlight 2, was the skill tree. After playing Diablo 3, I thought I wouldn’t be able to go back to spending points on skills. However, I was soon reminded why the old model was so much better.

In Torchlight 2, I can either go crazy and put points into multiple skills, to have a large arsenal at my disposal. Alternatively, I could specialize and use about six super powerful skills. Both options worked and felt equally rewarding.

The way Runic Games pulled this off, was by removing the old tier system that required you to dump points in a particular tree, to get access to all the skills in that tree in favor of a new individual skill tier system. What this did was allow players to have an unparalleled level of customization.

The new individual skill tier system gave abilities additional effects, for every 5 points into them. So not only do you gain an increased effectiveness for every point into the skill, but you’ll gain bonus effects for each tier you unlock for that specific skill.

Keep in mind that every point you spend, is basically permanent. At first, I really didn’t like this. However, the fact that you can respect your last few skill points spent, allows you to play with a new ability, to decide if you want to keep it or not.

If you play smart, there’s really no reason to respect – unless you want to play a class in a completely different way. In that case, just make a new character (which is what the developers’ want, as it extends the life span of the game).

Speaking of the lifespan of this game, the mapworks provides multiple ways to re-experience the content. Depending on which map you purchase, you can teleport to randomized dungeons with different settings.

Some of the maps increase damage by a large amount, while reducing how fast you attack and cast. Others might include death explosions for all enemies, while increasing magic find.

Torchlight 2 truly is the spiritual successor to Diablo 2. Not only is the gameplay practically identical, but the story is as well. On my first play through, I could predict every story element including where I would go, what the setting would be, who I would fight, when I would fight them, based solely off of what occurred in Diablo 2.

I have yet to determine if that was a good or bad thing yet. Indeed, while many members of the Runic Games team certainly did make Diablo 2, I’m not sure that entitles them to literally reimagine it, almost act per act, in a steam punk setting. Having said that, I totally dug the steam punk setting and loved basically replaying Diablo 2, with updated graphics and tweaked to perfection gameplay elements.

Hell, even the music was the same. Matt Uelmen, the composer for Diablo and Diablo 2, came back to do the music for both Torchlight games. The result is a haunting, nostalgic trip that is simply quality, all the way through.

Unfortunately, that’s where the sound quality ends. The voice acting is mediocre at best, though their written dialogue isn’t much better.

In retrospect, perhaps Diablo 2’s dialogue wasn’t that much better, but the way they were delivered, made for some epic story telling. I also like the general storyline of Diablo and Diablo 2, and the Torchlight series, so far, copies it almost 1:1. So in that regard, the story elements of the game come out somewhere in the middle. The overarching storyline I enjoy, but the way it was delivered and presented was very poor indeed.

Overall, I thoroughly enjoyed my Torchlight 2 experience. With its scintillating steam punk setting and vibrant cell shaded graphics, one can’t help but fall in love with the games’ charm and perfectly polished gameplay.

Gameplay:
For the genre, it doesn’t get better than this.

Graphics
While not technically impressive, the distinct artstyle and setting makes the game an absolute spectacle.

Sound
The music is the real soul of the game.

Value
For $20 you get exactly what you’ve been craving for, for the past decade

For $20 you get exactly what you’ve been craving for, for the past decade.