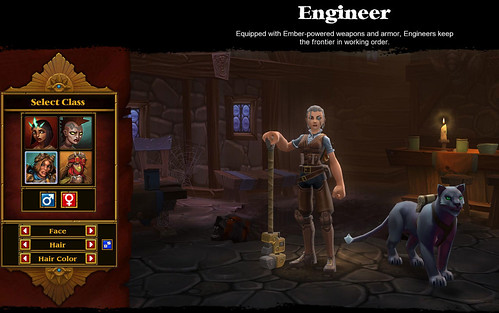 Engineer is a very durable character that can still dish out a great deal of damage. The Torchlight 2 Engineer Skill Tree allows the summoning of various robots that can assist him in battle and is usually found wielding a large two-handed hammer or a sword and shield.

The Blitz tree makes him a menace with two-handed weapons, the Construct tree upgrades his robots and Aegis gives him more prowess with shields and one-handed weapons. For more help on Torchlight 2 Engineer, read our Builds Guide.

Blitz Skill Tree
Flame Hammer (Level 1): Your weapon create 4 fire splinters upon the point of impact, dealing damage to more enemies who happen to be in their 5 meter range. Mana cost: 14.

Seismic Slam (Level 7): Your stomp causes enemies to get stunned and catch fire around you. It has a radius of 4 meters. Deals 10 fire damage over 5 seconds. Mana cost: 8.

Ember Hammer (Level 14): A side long swing of your weapon. It destroys enemy shields if they have any. Mana cost: 10.

Coup de grace (Level 14): When hitting an already stunned target there is a chance they may get electrocuted. Always active.

Onslaught (Level 21): Leaping forward you hit the ground with your melee weapon. Foes at the point of impact get their attack and movement speed down to 50% for 2 seconds. Mana cost: 16.

Emberquake (Level 42): I unleashes 8 magma fissures to find and destroy your foes. Does 10 fire damage and has 20% chance of burning the enemy. Mana cost: 18.

Ember Reach: This is a focused surge of high energy that will pull the enemy into the striking range of your attacks. This will also give you the advantage of 20% stun chance on enemy for every charge you have.

Storm Burst: This is kind of a blast from your pack of rockets and it will just push your enemies backward and knock them down. It will strike remote enemies with three bolts of energy discharge from your suit.

Heavy Lifting: This is a skill of great weaponry that will just allow you to move and attack faster with huge weapons and it will also add a chance to stun your enemies

Construct Skill Tree
Healing Bot (Level 1): You deploy a small robot that gives out an energy pulse both you and your allies. It does 800 health per 4 seconds recovery rate. Mana cost: 25.

Spider Mines (Level 14): Moving mines carried on the back of small robot spiders. They explode near an enemy with a radius of 3 meter. Mana cost: 22.

Cannon Mastery (Level 21): Your skill with the cannon grow, your attack speed with the cannon is increased by 3% and the critical damage it causes by 10%. Always active.

Shock Grenade (Level 28): A grenade which when thrown can possibly shock and stun your foes in a 4 meter radius for 4 seconds. It does 10 lightening damage. Mana cost: 7.

Artillery (Level 35): A moving cannon that you can set up. It lasts for 30 seconds.

Fusillade (Level 35): A barrage of rockets from you cannon. Mana cost: 23 per second.

Sticky Bombs (Level 35): Whenever you attack a stunned target you attach a bomb to him which explodes 3 seconds later. It does 10 electrical and fire damage. Always active.

Aegis Skill Tree
Shield Bash (Level 1): Bash enemies with your shield to slow them or interrupt them. Damage is equal to 5 times your shield’s Armor value.

Storm And Board (Level 1): It adds some of your shield armor value to your melee weapon’s damage value. Always active.

Force field (Level 7): An aura generated around you by your armor to protect you from attacks. Force field uses up your charge bar to absorb enemy attack directed at you.

Aegis Of Fate (Level 7): A defensive bubble that generates around you when enemies attack. It also add 50% knockback resistance. Always active.

Overload (Level 14): Overload your targets armor to electrocute up to 5 enemies in a 6 meter radius. Deals 10 electrical damage.

Charge Reconstitution (Level 14): When using charge for skills you regain some of your health. Always active.

Dynamo Field (Level 21): An electrical blast generated by the power of your armor. It has 5 meter radius. Deals 10 electrical damage over 2 seconds and has a 50% chance of interrupting enemy skills.

Ember Reach (Level 28): A channeled burst of energy used to pull your enemy closer to you. For every charge you have you gain 20% chance of stunning the enemy for 3 seconds. Charge is not depleted though.

Gravity Well (Level 28): A well that attracts enemies towards you while simultaneously damaging their armor rating as well. Mana cost: 25.

Fire Bash (Level 35): You channel a potent blast of energy through your shield up to 6 meters away. It knocks back your foes as well. Mana cost: 9.