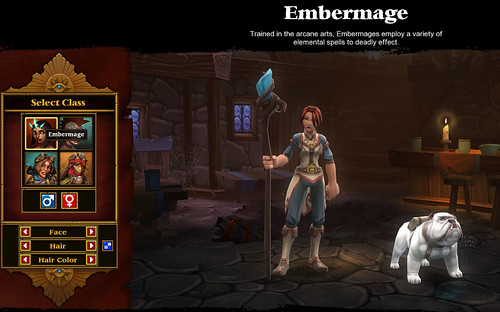 Embermages are essentially the glass cannons of Torchlight 2, raining devastating spells down onto their enemy to destroy them. They have three distinct Torchlight 2 Embermage Skill Tree; Inferno, Frost and Storm.

For more help on Torchlight 2 Embermage, read our Builds Guide.

It is worth mentioning about the Embermage Charge Bar as your mana and damage boosts are linked to it. A filled charge bar grants the character infinite mana for twelve seconds and 25% boost to damage done.

The charge rate of the bar depends upon the amount of damage dealt.

Frost Skill Tree
Icy Blast (Level 1): You fire 5 ice bolts to slow and immobilize your enemies. These bolts can bounce of an enemy and strike another enemy too. This skill has a 50% chance of freezing and immobilizing your enemies for 3 seconds. Mana Cost: 11.

Staff Mastery (Level 1): Your skill with staves lowers the elemental resistances of enemies when you strike them. For e.g. 6% resistance to electric attacks decreases for the enemies. Always active.

Frozen Fate (Level 7): Whenever you kill an enemy, you have a chance of freezing up to 4 more enemies in a 7 meter radius. Always Active.

Hailstorm (Level 7): Rain down ice shards in a 15 meter radius around you. You have a 50% chance of stunning an enemy for 3 seconds when they get hit and a 10% chance to freeze them for 6 seconds. Mana cost: 14.

Ice Brand (Level 14): When you hit a frozen enemy, you do extra ice damage. Always Active.

Frost Phase (Level 14): You teleport a short distance. In both places, you dish out ice damage with 2.5 meters burst. It has a 10% chance for freezing enemies for 3 seconds. Mana cost: 13.

Elemental Boon (Level 21): You cover yourself with an aura that increases your resistance to effects like poisoning and such. Allies within 12 meters of you also benefit from it. Mana cost: 10.

Ice Prison (Level 35): You trap your enemy between ice pillars, and these reflect enemy spells back at them. The pillars last for 8 seconds. Mana cost: 14.

Inferno Skill Tree
Magma Spear (Level 1): Fire a channeled barrage of magma at your enemies. It has 3.5% chance of inflicting 6 fire damage over 3 seconds. Range of the skill is 16 meters. Mana cost: 9 per second.

Charge Mastery (Level 1): Your expertise with Charge lets you gain it faster, and retain it longer. Charge gain rate increases by 4 %. Always active.

Magma Mace (Level 7): Summon a fire mace and it will stun enemies in a 5 meters arc in front of you. It has 80% chance of stunning the opponents for 3 seconds. Deals 10 Fire damage over 6 seconds. Mana cost: 10.

Elemental Attunement (Level 7): Embermage is more in sync with his skills. Inflicting more damage and extending the duration of his spells. Always active.

Fire bombs (Level 14): You throw three fire grenade, which ignite the ground for three seconds. It may even cause enemies to stumble as they burn. 10 fire damage over 2 seconds. Mana cost: 11.

Fire Brand (Level 14): When you hit an already burning enemy, you do more damage than usual. Always Active.

Blazing Pillars (Level 21): You get 4 giant pillars of fire that actively seek out your enemies and entrap them. Mana cost: 10.

Infernal Collapse (Level 28): You create a fire time bomb which blows off devastatingly in a 4 meter radius. It has 30 knockback value to it and does 10 fire damage Mana cost: 14.

Immolation Aura (Level 35): You are protected by fire swirling around you. Burns enemies within 3 meters of it. It lasts for 30 seconds. Mana cost: 10.

Fire Storm ( Level 42 ): You rain down fire meteors on your enemies in 15 meter radius around you. Fire damage dealt to enemies is increased by 20% for 6 seconds. Mana Cost: 14.

Prismatic Rift (Level 1): Your energy gets your enemies teleported to other places when they strike you. It has a random chance of giving your enemies a random elemental effect while doing so. Always Active.

Prismatic Bolt (Level 1): You fire 5 bolts that have a 5% chance of poisoning, burning, freezing and shocking your enemies for 3 seconds. Mana cost: 10.

Shocking Burst (Level 7): You fire a channeled burst of lightening that damages foe in 8 meter range and are in 75 degree angle from you. Enemies explode if they die from it thus damaging other enemies too. Mana cost: 19 per second.

Lightening Brand (Level 14): When you hit an already shocked enemy, you do extra damage. Always Active.

Thunder Locus (Level 14): You summon a thunderstorm over a location with a 7 meter radius. It lasts for 15 seconds. Mana cost: 17.

Arc Beam (Level 21): Like the Shocking burst however, this beam splits into two whenever you kill an enemy with it so attacking even more enemies at the same time. Mana cost: 17 per second.

Death’s Bounty (Level 28): You can interlink the souls of all the foes in a 6 meter radius. Upon their deaths, you get a bit of their mana and life force. 10 hp per second and 3 mana per second.

Shockbolts (Level 35): You fire 4 bolts and they bounce of which ever surface they strike. Mana cost: 10.

Shocking Orb (Level 42): A moving electric orb that damage enemies as it passes them by. Mana cost: 10.