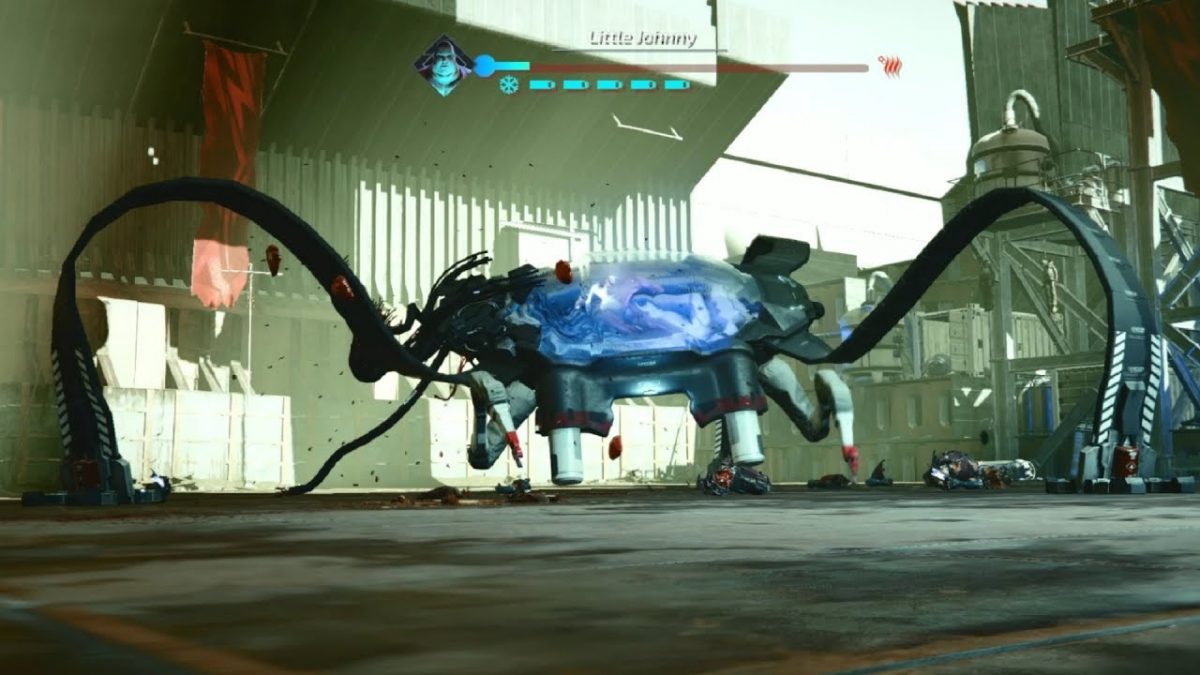 The Surge 2 Port Nixon Walkthrough Guide will help you through The Drug Lord quest and will also help you defeat Little Johnny and Brother Eli so that you can progress with the game.

This quest opens up after you first go to the Seaside Court.

Our The Surge 2 Port Nixon Walkthrough Guide will help you step-by-step on how to defeat the little Johnny and Brother Eli and the game path you need to take. This quest will take you through Port Nixon and then back to the Seaside Court fora second visit. Note that I will only be detailing the main path.

As you enter the Port Nixon, go down the stairs to the ground floor. There are several blue Spider Mines in the area that you need to avoid because if you get close they charge at you and explode.

Use your drone to shoot and destroy them from a distance and continue to the next set of stairs and go to the top. As you reach the top, there will be a Lift Hook station bit you can’t use it yet. Go down the stairs to the left and again go left once you reach down there.

Keep moving through the area to the end and continue ahead onto a series of pipes. At the end of these pipes, you’ll be at Blue Sparkle Compound.

Continue until you get to the Medbay, interact with it and talk to Little Jhonny. Continue through the open door but, you can loot the area before you move on.

Take the passage to the right and you’ll come face to face with a Spark Aspirant enemy, defeat it and continue to the next set of stairs. Drop down to the area at the end and then use your drone to take out the turrets to the right.

Another Spark Aspirant enemy will come through the door that you need to defeat. Once the area is clear, head through the door from where the enemy came. Follow the pipe to the end, give Mortimer Gideon the Third some tech scrap and he’ll give you hint about a shortcut to Terminal Z.

Drop down to the road below and you have a choice to make either take the tunnel to the right or continue on the street. Take the tunnel as it’s comparatively simpler.

Take the tunnel to the right and continue until you get in an indoor area. You’ll see a stationary Spark Aspirant but don’t be fooled as he isn’t alone. Clear the area then go the back of the area which is flooded and there is a small ramp.

Dropdown there, deal with the spider mine and then defeat the Spark Aspirant. Follow the flooded street and take the first set of stairs on the left. Follow this path and you’ll come to the heavily fortified main street with another street to the far side.

As you get to the top, there will be a Scavenger and it’ll run off but don’t follow him as there is a turret just behind the corner. Once the area is clear, go to the far side of the walkway and then dropdown.

Make your way around the next corner, defeat the engineer then take the stairs to the top and continue to the next area. A heavily armored Spark Defender and a Spark Aspirants on a platform overlooking the area. Defeat them and then get to the exit and take the path downward.

There is a small path leading into the water, take it and go to the end where you’ll find a Nanite Echo. Stand in it and then loot the Loot Cache and return to the main area and follow the shore to the left.

Clear the are of the enemies ahead and be careful as there are turrets here too. Continue along the shoreline and there are spider mines along the way. Two more will emerge from the container nearby so be careful.

Follow the path and take the safe passage around the toxic sludge to a concrete pipe. Enter the pipe and follow the passage to the end until you get to the room with a magnetic life. There will be enemies here that you need to clear.

Then you’ll face the PAx Mech that you need to defeat. Take the magnetic lift to the top and move along the passage but be careful as an enemy will jump out from a side-area.

There will be a turret at the end of the room and an enemy to your right. Clear the area then destroy the wooden crates to reveal a secret passage. Kill the enemy you face in your way then interact with the left-hand panel and then the right-hand one to release spider mines that’ll destroy the PAX Mech.

Take the exit located on the far side of the drug lab room. Defeat the enemies in the lower area and go throw the lower exit.

Use the Magentic Life to get to the Medbay and then go towards Terminal Z while dealing with the enemies along the way. Take the tunnel to get to the Terminal Z – Salvage Deck. In this area go up the spiral stairs and open the door.

Take out enemies and go up the stairs. There will be a turret and other enemies to deal with as you go up. Open the door and defeat the enemy inside. Drop down to the area below and continue ahead and it’s time for a boss fight.

You need to destroy five cooling tanks. Three of them on on the legs and two and under the cockpit. Target the legs first but it’s going to be difficult since he moves a lot. Just dodge the attacks and hit when you have an opportunity.

From the Medbay, go across the pipe bridge and then to the Iron Maus Comic Store. Open the magnetic lock, go up the stairs and head back to the direction of Seaside Court. Along the way, you’ll face another boss fight with Brother Eli.

Brother Eli attacks pack quite a punch and while they are easy to didge but, given that you are fighting him in a small area, it’ll be difficult. Just dodge his attacks and when he’s dome land a few hits. Do enough damage and he’ll call reinforcements in the form of two goons. take then out quickly and then focus on Eli. Just dodge and attack and he’ll be defeated.

Once Brother Eli is down, a Nanite Echo will appear. Stand in it and after that make your way back to the Seaside Court.

Things have changed around the Seaside Court. There are NPCs to talk to and things to find. To continue, talk to Jordan Black and she’ll give you a new quest Way of the Hunter.

That is all for our The Surge 2 Port Nixon Walkthrough Guide with tips on The Drug Lord quest and how to defeat Little Johnny.