The Legend of Zelda: Breath of the Wild Review – Hyrule’s Finest Hour

The Legend of Zelda has an unmatched legacy and for such a massive IP it is often hard to maintain the level of quality. Naturally, the pressure is on the developers to put out a great game and meet expectations.

After a long wait, Breath of the Wild is finally here for Nintendo Switch and Wii U. Link is back but his adventures take place in an open world environment.

A new console, a new story, new features, The Legend of Zelda: Breath of the Wild takes a great leap forward.

The Legend of Zelda: Breath of the Wild Review

Nintendo Switch’s very first party exclusive leaves behind a slew of traditional features such as classic dungeon system, you can not cut grass to earn cash or HP. Story is again at the heart of Zelda but it is not necessarily driven by story. Gameplay is the main focus here and the game does not waste any time to throw you into an open world without direction, Zelda will not hold your figure and lets you figure things out.

Breath of the Wild is a combination of new and old, and frankly, it is outstanding to say the least. Consider it a refinement of classic ideas blended with a mix of fresh concepts. We can’t go as far as calling it a genre defining game, it is not, still, Breath of the Wild is a remarkable achievement for Nintendo.

You will be cast into an open world with nothing in your bag so you are completely on your own. Developers took notes from other developers as such as Ubisoft, clearly, climbing towers to open up more of the map is inspired by Assassin’s Creed. You can also find Skyrim DNA in Breath of the Wild in the way you gather loot, upgrade armor etc.

The vast open world allows you to travel anywhere you like, the linear nature of past Zelda games is nowhere to be found. The Legend of Zelda is 30 years old now and Breath of the Wild is indeed a breath of fresh air for the franchise.

Navigating through the beautiful environment is made easy via a new tool called “Sheikah Slate.” It allows you to place pins and waypoints on the map, making Link’s life a little easier during his first time in an open world environment.

The same tool also allows you to track your quests.

The combat system is Z-Targeting driven and throwing bombs, using a glider, and motion-assisted bow aiming are a part of gameplay. The new game kicks-off as Link is trapped within one area, guided by an old man. Link first reaches the first tower and then moves to a few shrines.

As you go through each Shrine you get runes and the Shrines teaches you how to use them via puzzles. Shrines are reminiscent of the old dungeons. Runes are in place of traditional Zelda items, there are a couple of bomb types, and developers have added three new powers. 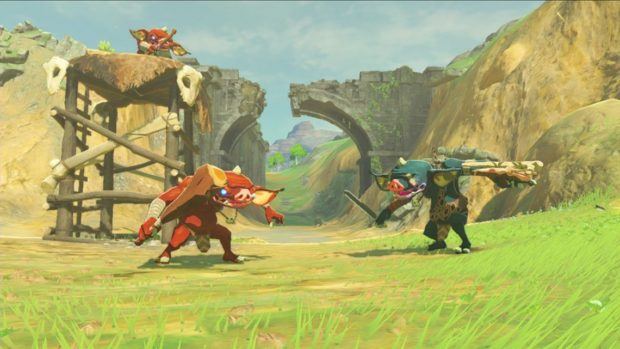 You can use these base game mechanics to complete different puzzles and missions throughout the game. You will also see the return of boomerangs, deku leaves and elemental magic rods.

Once you have access to Hyrule, you can find a horse, train it and give it a saddle. You are free to climb mountains, cook, locate hidden extras, unlock the map through towers, attack enemy encampments and find loot. Shrines are spread throughout the map and each one contains a mini-dungeon of its own.

Shrines will keep you busy for the most part as there are over 100 of them in The Legend of Zelda: Breath of the Wild. Shrines are brief and don’t really offer a challenge to the players once you spend enough time in the game. Still, the lackluster shrines are covered by the brilliance of the open world, which is a joy to explore.

The philosophy behind shrines is quantity over quality. There are over 100 Shrines in the game but not a single one that I considered to be memorable. You will rush through them, being more focused on rewards, then the feeling of achievement. 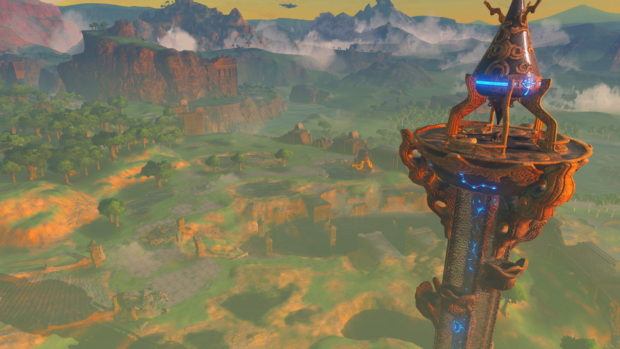 As the player, you are constantly excited about exploring the open world that holds many secrets, different types of enemies, and twists. Almost every nook and cranny you explore holds some form of reward.  Unfortunately, most of the items you find are going to be low-tier weapons.

The inventory you actually use is very limited which is a shame. You can use Korok Seeds to upgrade your inventory but still, you would end up discarding many of your beloved weapons. The equipable item stats are simplified as there are only two  – Attack and Defense.

But this streamlined system doesn’t change the fact that inventory feels clumsy and half-heartedly done.

Your weapons and all items you use to attack are going to take damage, degrade and break down. This means that you are constantly worried about making sure your weapons are in top-notch condition. Thankfully, there is plenty of variety when it comes to combat items available to you that means Zelda presents plenty of creativity options to the players.

Speaking of creativity, traditional health potions are gone and now we have cooking. You can find different items and make a meal to boost HP as well as temporarily boost attack and defense stats. It is an interesting system but it feels burdensome. It would have been so much better to have traditional HP potions and have the player craft potions from the inventory screen – easy and convenient. 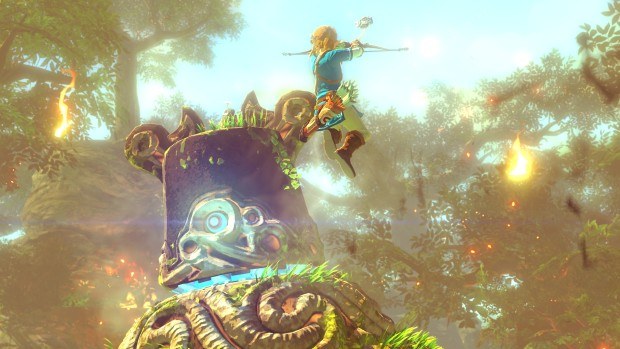 The overall cooking system grows on you once you spend more time with the ingredients.

The main campaign structure gives the player freedom to complete it in any order and the main story is well-written. It is dark but doesn’t reach the level of melancholy as Majora’s Mask. You can feel the sadness and loss Hyrule is facing and color pallet of the game compliments the dark tone of the main story and characters.

It is a shame that Link is still a silent character, this is one area where Nintendo needs to take a step back and allow Link to speak which will do wonders for his personality. For Beath of the Wild, a silent Link means that you feel connected with the world but not so much with the lead character, even though his legacy is unmatched, he feels bland at times.

The good news is that other major characters do have a voice but that just even further highlights the fact that Link doesn’t.

The best part about The Breath of the Wild is how it nails the freedom of the open world. The main story is not to be missed but it is optional. You can go ahead to the Hyrule Castle to face Ganon anytime you want. It is unwise to do so but we will see streamers trying to beat Ganon at level 1. 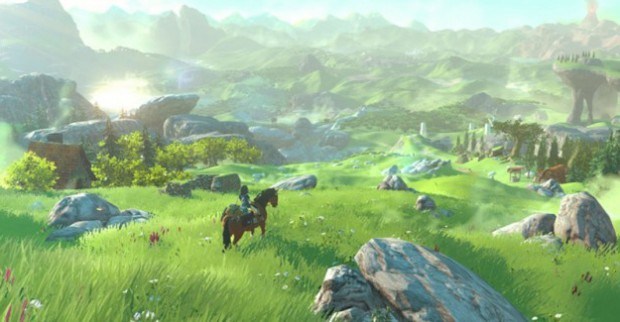 Masterful exploration combined with sublime music and unique story-telling methods are the highlight of Zelda’s design. The music is ambient and feels good to your ears, it is often soothing and forces you to immerse yourself in this beautiful world.

Graphics and art style is gorgeous to say the least but its flaws start to creep in when Switch is plugged into the dock. Playing Zelda on a big screen means noticeable aliasing issues. While post-release updates may make improvements, in its current state, it is better to play Zelda on the handheld.

To sum it up, even with some of its flaws, The Legend of Zelda: Breath of the Wild is Hyrule’s finest hour. A great leap forward for Nintendo.

The Legend of Zelda: Breath of the Wild

Reinventing The Legend of Zelda.