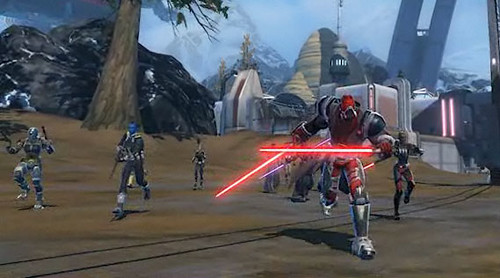 Warzones in Star Wars: The Old Republic are PvP maps with specific gameplay modes. Participating in Warzones gives valor points, which increases your Valor Rank, which in turn allows you to equip PvP-specific gear.

From Level 10 onwards, you can queue for any warzone by pressing the concerned button right next to your minimap. You will enter the first available warzone and face other human players in that particular section.

PvP battles aren’t rank dependent – you can either choose to battle with players having similar rank as of yours (better option) or if you are feeling high, you can even try your luck against a level 50 guy. For the time being, all warzones support 8 vs. 8 PvP battles.

There are three main Warzones:

Additionally, World PvP is also available in SWTOR. In PVP servers, players may face enemies in certain areas on neutral planets. Additionally, they can also participate in the World PvP on the planet Ilum.

The Imperial and Republic clash on the bruised and scarred grounds of Alderaan. In the skies, two troop transports, one for each faction, continuously supply their respective faction with reinforcements.

The objective is to knock the enemy’s transport out, by controlling three laser turrets that are spread out across the battlefield. Once a turret is controlled, it opens fire at the enemy transport.

As more turrets are captured, the effect is amplified, and once the enemy’s transport ship is damaged enough, it will explode, and the battle will be over.

Like any node-based gameplay mode, it is essential to always be dynamic – going from one node to another once it is captured.

Teamwork is obviously essential, and though moving in bulks can ensure aggressive gameplay, there are always opportunities for the enemy to utilize this strategy and capture un-defended locations, which can be disadvantageous.

Strategy Tips
Teamwork will play a crucial role in it as the guns are quite close to each other. One good strategy is to capture one gun with team effort at the start of the match and once it’s captured, one should stay behind to defend the node and rest can strive for the next one.

DoTs work well for defending as they can absorb relatively more damage. When your team has captured the second node, number of players defending each node will depend on the skill level of the team.

Traditionally, one can do the job but if the opposition is too strong to handle, one more defender can be a good option.

Rest of the players can then roam free and try to sneak onto the third node or provide support whenever any captured node is in danger.

Don’t forget to share your strategy to dominate Alderaan Warzone in comments below!

In Huttball, two teams meet against each other in ‘The Pit’, a deadly arena that has a gameplay similar to Bombing Run from Unreal Tournament series, or simply similar to soccer.

The teams battle for control of a ball which appears in the center of the arena. Whichever team has the ball must run with it, pass it, or use whatever means necessary to get it across the opposing team’s goal line.

Unlike soccer, you have to constantly fight enemies during the entire process, and also avoid deadly traps that litter the arena grounds.

Among traps, the Fire Tower trap will knock you out in a couple of shots while you will sign your death sentence if you stay in the acid pit for more than 4-5 seconds.

Air vents though will push you in different directions. Huttball is the only Warzone that allows teams from the same faction to play against each other i.e. you can have Republic vs. Republic, Empire vs. Empire, or any combination you desire.

Player scoring is based on the awarding of different kinds of medals. Whoever has the most medals at the end of the match on each team is listed at the top of the leaderboard.

Medals can be earned in a variety of ways, such as scoring the ball, number of kills, carrying the ball etcetera.

Additionally, all the players in the game are given the option of voting for their team’s MVP to be awarded an honor bonus. Players can vote for anyone but themselves

Strategy Tips
First of all, it is essential to get used to the ‘pass ball’ ability, which passes the ball to a targeted player. It can also pass the ball to enemies, so it is really essential to understand the timing of passing.

Since everyone will be going after the same ball, you can expect the match to be pacy so instant abilities have advantage over the channeled abilities.

The key to success in Huttball is to pass the ball frequently, and have possession, similar to the key success in the soccer.

The only difference is that you have to be very careful of the obstacles that come in the way. Also, positioning is extremely essential to allow convenient passing; standing on higher ledges than the play in possession will make it easier for him/her to pass the ball.

Being a defender, you should try to slow down the movement of fast approaching enemies using stuns or knockbacks etc.

For the aggressive players, speed and survival is important specially for the ball carrier. The support team of the carrier should try to clear the path ahead before moving the ball forward.

These obstacles can be used to your advantage. For example, you could use a Force Push to send enemies into fire traps just as they become active.

However, the key feature is to actually engage the enemy only when it is utmost necessary. Remember, your primary objective is to score the ball – killing is a secondary goal.

There are also consumable power-ups in each corner of the map, and taking them can really turn the tides. When not in possession, do not get distracted by other players – try to focus your entire damage on the ball carrier (who is easy to spot as the carrier is marked on the minimap).

Of course, if there is a healer that is constantly healing the carrier, it will be a good idea for at least one player to concentrate on him/her, while the others try to cripple the carrier.

Don’t forget to share your strategy to dominate Huttball Warzone in comments below!

Voidstar is an Assault type mission-based Warzone, in which one team attacks while the other defends. The objective for the attackers is to access the ship’s data core, while the defender’s task is to defend it, by preventing the attackers from reaching the core.

The battle takes place across multiple sections of the ship. Some are quite linear, while others are dangerous, such as the elevated bridge spans, where taking a leap can be lethal.

The map is broken into two rounds. After the completion of one round, the attackers become the defenders, while the defenders attack.

Like in any Assault-based gameplay mode, it is extremely important that you attack as a team, covering each other and moving together. Isolated players will always be targeted, and will have no chance against multiple defenders.

Thus, it is essential to move as a pack, taking good strategic positions and covering yourself and the team while gradually progressing. Remember, you are the attackers, your job is to play aggressive and smart, and that can only be done with good teamwork.

For defenders, the key is to move into important positions, such that all entrances and significant locations are covered. However, like the attackers, it is unwise to become dispatched or isolated. Make sure the positioning is such that every defender can cover another defender’s back when needed.

Remember, your job is to defend – no one will question your methods if you choose to wait for your enemies and defend. It is very unwise to blindly run into the enemy and try and take them out.

Strategy Tips
Healers play an important role in this warzone as they can heal the whole group (as the players are cluttered for the most part) and turn the battle upside down. So if you are in attacking team, try to take them out first.

Tanks should try to provide support to the healers as they can afford to absorb some damage before being knocked out by the enemy.

Don’t forget to share your strategy to dominate Voidstar Warzone in comments below!

Each player is awarded with break free abilities which help them to override most of enemy’s movement impairing attacks like stuns etc. Since there is a two minute timer, use them wisely.

For example if you are against multiple players then there is a strong chance you will die, so spending break free ability in this situation won’t be a wise option.

Keep in mind that there are diminishing returns on stuns and knockbacks etc. It means that using these abilities on the same point will impart immunity making people recover fast from these effects or even ignore them. It can be advantageous for both the defenders and attackers.

You should devise your attacking or defending strategy depending upon the type of role you are up against – Healer, DPS and Tank.

Interrupts are real pain for the healers while for tanks, you should attack with full force as it will take some time before you can bring down a tank.

Against ranged attackers, you should use interrupts and stuns which will render them almost useless because they usually use channeled abilities which take some time to execute.

If you have any tips of your own, do share with us in the comments below!