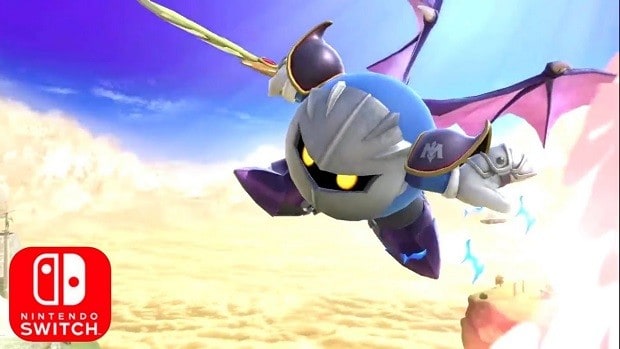 Meta Knight makes a return to Smash Bros. He is from the Kirby series and is generally considered one of the stronger characters in the game. There have been quite a few changes to him since his last appearance and our Super Smash Bros Ultimate Meta Knight Guide will take you through all of them as well as explain how to best use the Meta Knight in battle.

The Meta Knight is one of the lighter characters in the game who is quite fast on the ground but not so fast when in the air. Do not worry though since he is still quite proficient in the air and does a lot of his damage when suspended between the clouds.

Let us go ahead and take a look at how you can unlock the Meta Knight followed by his movesets and the alternate costumes that he has available to him.

How to Unlock Meta Knight

The first move that you can do by pressing the B button is the Mach Tornado. It hits enemies and launches them in the air. You can hold the left stick to the side to charge the opponents with your Drill Rush too.

Holding the Left Stick up causes you to perform the Shuttle Loop. This move strikes the enemy from the air and then does it again after a loop. Any enemy hit is launched into the air. The Down smash will get you a free attack on the enemy after you vanish and teleport to a new location.

As for your Final Smash, you have the Darkness Illusion. This move raises Meta Knight’s sword and then emits a blast of electricity. If you succeed in hitting the enemy with this blast, then you will multiply yourself and deal damage to the opponent in great numbers. If you do not hit anyone, then your move will be wasted.

Meta Knight does not have any special Alternate Costumes that you can use. He does, however, have 8 different variations of his standard costume including, Red, Black, Orange, Green, Silver, Blue, and Gold.