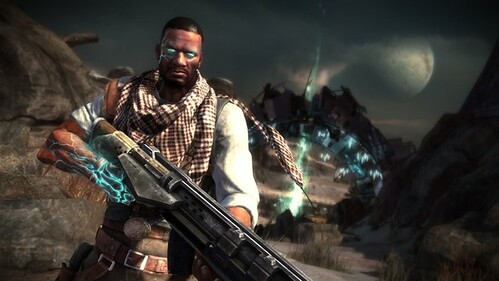 In the battlefield, one should be aware of the strengths and weaknesses of the weapon being used so that one may not underestimate or overestimate the potential of a weapon. You should know about the arsenal at your disposal before you jump into the fight.

Starhawk like most other shooting games, offers a variety of weapons for both ground and air assault. After you have the basic idea about each weapon, the selection task gets easier.

Gunslinger Revolver
With an exciting “gunslinger” mechanic, you will be able to play with this weapon in the story mode. The weapon is actually quite damaging if you aim your targets right and will be used by the character named Emmett.

Galloway Revolver
Revolvers are always powerful weapons through which you can take out enemies in a couple of well-placed shots. It’s stopping power, However, is slightly lesser than the Gunslinger Revolver.

Kinectic Rifle
The typical assault rifle a fiction based shooter can get. You can use this weapon for medium to long range combat quite effectively. It does not have the auto-aim feature that may trouble you a bit, but once you are used to it; you can have a lot of fun with it.

LR-3 Railgun
It’s the snipe rifle for you in the game. You are aware of a Sniper’s task, right? To be a troublemaker for the enemy, you just need to patient and find a couple of good tactical spots where you can have a broader view of the major section of the map.

Using a sniper rifle, your targets should be infantry, and you should try to avoid the armored vehicles as much as you can.

MAW
You can use these rocket launchers to lock-on the targets. After a successful lock-on, they will track the target until they are exploded.

If you are being locked-on (in a vehicle specially like the Hawk), you should use the dodging capabilities to stay safe.

Shotgun
Shotguns are always fun weapons to be played but only if you know their proper use. They are effective in close quarters combat, and if you find an enemy at distance, you will have to switch to the other weapon as shotguns are useless for medium to long-range.

Grinder
It’s more or less like a flamethrower with the only difference is that it emits spark instead of fire. The weapon is quite damaging but if you use it too much, the wielder can also be affected by it.

Combat Blade
The Combat Blade has made a return to Starhawk, and its function is almost same as in its virtual ancestor. You can access the blade by pressing ‘R3’ button on your pad.

Proximity Mine
Proximity mines work just like the claymores which will automatically explode when the enemy is in the proximity radius. You can place these mines to defend your base at places where the enemy will least expect to find them.

Tetranite Grenade
You can use these grenades to take out the ground units and vehicles. They are quite useful, especially when you find multiple enemies in the close range in some closed structure. Each player is allowed to have three Tetranite Grenades in a single life.

Repair Tool
The repair tool has dual functionality; you can either use it for the healing purpose, or you can use its energy beam to destroy the enemy structures.

Machine Gun
The machine gun will serve the purpose of a typical Gatling gun which you will generally find mounted on vehicles. Using it in short bursts is more effective rather than the continuous onslaught as it gets heated.

Swarm Lasers
Using the laser swarms, players have the freedom to lock-on multiple targets in one go. The projectiles then cruise towards the target to destroy it. They will be quite helpful specially you want to destroy multiple enemy targets/structures quickly.

Homing Missile
Just like the RPGs, you will be able to fire one missile at a time. They are slow but cause more damage than the other missiles. You can use them to take out the armored vehicles and fortified structures in the enemy base.

Flak Gun
The Flak gun has almost the same use as a shotgun which fires multi-shelled bursts and is quite effective at short distance. The weapon is almost similar to the Lightening Gun in Warhawk.

Cluster Bombs
One can use these bombs to bombard the enemy base from above. They have the capacity to destroy heavy structures and other enemy defenses, which apparently seem to be indestructible from the ground.

Air Mines
You can launch four air mines at a time to surprise the enemies on the ground. In Starhawk, the power of this weapon has been reduced, and the opponents now have more chances to evade them.

Torpedo
Torpedo arguably is the most powerful weapon in the game. It’s like a nuclear blast where all the troops, vehicles and structures will be destroyed in range. The typical blue energy and the sound are the symbols that let everyone know that someone has used this weapon somewhere in the map.