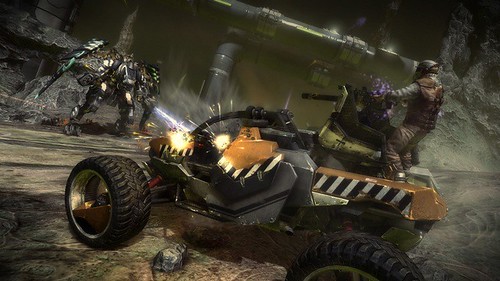 Starhawk’s multiplayer features a unique touch of strategic gameplay in a typical third-person shooting environment. Shooting people with various weapons and vehicles is one thing but the requirements to spawn these warfare elements are just like a typical RTS.

Build the structures first and then you can produce whatever you want at a specific price. Defensively, one can build walls and turrets, etc to guard the perimeter.

Now, if you are new to such type of gameplay, then it’s probable that you will need some help to get things started. The best thing to do is to make yourself familiarized with basic controls and gameplay mechanics in the singleplayer campaign.

Let’s just start with the basics, and then i will throw some light on the offensive and defensive options in the game.

Every one will spawn through airdrops. For the first time, you will take control in your base. The green zone on the terrain is the area where you can spawn at your base.

After you have taken control of your soldier, it’s time to start building. A good team will coordinate and build diverse structures (both for defense and offense) which actually is a better strategy to win the war.

After the first deployment, you will have the option to maneuver your pods even on the enemies. When you are in air, you can direct your pod right at the end to land it on any enemy on the ground to grab a kill.

Enemies are marked as red markers on the map which can help you to spot their locations. It’s like a dart in your hand, and you need to hit the right spot to get a kill or two.

The obvious thing that will hit your mind after spawn is what structures should I go for? Since everyone will be building something, it’s better that you wait a bit and analyze the situation so that your team doesn’t have plenty of structures of one kind.

If you are looking for offensive options, you can build corrals for Sidewinders, garages for Razorbacks and Ox Heavy tanks, launch pads for Hawks, and stations for the Vulture jetpacks.

The defensive options include supply bunkers, watch towers for snipers, beam towers, and Auto-turrets. Outposts, Shield Generator, A.R.M.’s and walls are among the other strategic elements.

To build these structures, you are going to need Rift energy shown in blocks in top right of your screen. A structure can require 1-10 blocks depending on its warfare importance. The construction wheel will show you the structures, and the points required to build the concerned the structure.

The green image means that you can deploy that structure at that place while the yellow one means that the structure you are trying to deploy is not feasible for that location.

Each team is allowed to build certain number of structures so you will have to keep that in mind before you go on the building rampage. It’s a good option to build outposts away from your base, which can serve as the aggressive spawn point for your team.

You can also choose to drop in structures near the enemy base to keep up the attack. Now that you have the idea about building structures, let’s just have a look at your defensive and offensive options.

You can also choose to drop in structures near the enemy base to keep up the attack. Now that you have the idea about building structures, let’s just have a look at your defensive and offensive options.

Vehicles
Vehicles are best option to get to the enemy base quickly and create some havoc. It’s important that you learn the use of these vehicles so that it isn’t like “All for nothing.”

Hawks are the most addictive and fascinating vehicles to use but not everyone can fly them well. If you want to fly it, you better learn the basics.

To learn the basics about every vehicle in Starhawk you can follow the link to consult our vehicles guide.

Weapons
Vehicles are useful but one can’t deny the importance of the weapons as Starhawk primarily as shooting platform. Some weapons can solely be used in ground combat while others can be effectively used both with vehicles and solo.

To know more about the weapons available at your disposal in Starhawk, you can refer to our Weapons Guide.

You may believe on the saying that the attack is the best way of defense but in Starhawk, you may have to deviate a bit from this strategy.

Strong defense gives a good chance to bounce back after an enemy’s attack. Let’s now discuss the roll of the defensive structures so that you may deploy them in a more effective way.

Walls
Walls basically help to develop a defensive boundary around the base. They are cheap to deploy but if deployed properly around the perimeter, the enemy ground units will have a tough time to infiltrate. You can also build gates through the walls for the movement of allied troops.

Auto-Turrets
Auto-Turrets will cost you three Rift energy units. Although a single auto-turret can be taken care of by a single melee attack, but if you have multiple of these turrets deployed to defend any structure, the enemy will have a tough time to get near them.

Beam Towers
Beam Towers can be used both automatically and manually to defend the the base against Hawks. If you let them do the job automatically, they will attack any Hawk that enters the radius. If you are not satisfied with their performance or the base is crawling with enemy Hawks, you can control things manually.

Watch Towers
Watch Towers are the best places to snipe down the targets rushing towards your base. The watch towers are also automatically equipped with rail guns. They are quite resistive structures and will cost you only three Rift energy.

Supply Bunkers
Supply Bunkers not only supplement your team with weapons but also serve as a defensive stronghold to deal with the enemies roaming around your base freely. Small windows can be opened through these bunkers to shoot the targets.

From distance, the enemy won’t be able to lay a scratch on the structure being defended that easily. If a watch tower has a couple of teammates in it and the structure is guarded by the shield, it will be one hard structure for the enemy to get across.

Outposts
Outposts primarily serve as the spawn points for your team. One can deploy them at various places to have the spawn advantage tactically. They will also generate the rift energy just like your base.

A.R.M.S.
ARMS tend to repair the building/structure they are attached with on damage. Apparently, they may look like promising but actually, the repair speed is not really good enough.

You can deploy them if you wish but most of the time, you may think that building new structures is a better option than sticking to repair.

When you spawn in the battle, you also get an option to choose a Skill which provides some extra trait to your character. There are 25 skills to choose from and you can select only one at a sing time.

These Skills however, are to be unlocked first before you equip them (by fulfilling the requirements). It’s recommended that you should go for the skill that suits your role the most. To know more about the Skills and the requirements to unlock them, you can refer to our Starhawk Skills Guide.

You can have better understanding of the game, but if you can’t play like a team, it won’t give you any benefit. Winning is important but one-man show don’t really help in many cases.

I am not going to share anything new as they are the very basics one should follow to enjoy the game fully, but sometimes we need some reminders. Following is the things you should never forget in the battlefield.

Communicate With the Team
Starhawk revolves around ‘Build and Kill’ strategy where you have limited number of structures which you can build both for offensive and defensive tactics. If you aren’t communicating

Think as a Team
Individual score no doubt is important but you may have to do some sacrifices to lift up your team. If you find that your team is missing a particular role and you can fill in that place then you should do it at once. This way, you will have more chance of winning as the rivals won’t be able to exploit that weakness you filled in.

Try to Keep Your Side Organized
This is one major point which can be the deciding factor between the winning and the loosing side. If everyone is fighting his/her own battle then there is a great chance that your side will loose the war.

There should be someone who should try to keep things organized, acting as a leader. You may face some criticism but if you are talking on logical grounds, sensible will try to follow your suggestion depending on the need. Staying quite won’t do any good anyways.

Don’t Build too Many Structures Without Need
If there is no balance between the defensive or offensive type structures then your team will automatically be at disadvantage.

One good way is that half of the team should try to focus on the structures that spawn vehicles or the outpost while others build the defensive boundary.

A balance will keep things smooth throughout the match. Building too many structures without realizing the need to can make your base vulnerable in different ways.

Try to Play the Role You are Best at
Everyone has his/her own taste and specialty. Logically, most players will choose the skills, weapon types of vehicles they feel they are good at.

There is nothing wrong with it but again, if you find that many among your team are doing the same approach leaving loopholes exposed to the enemy, try to switch i.e. if you don’t want to loose the match.