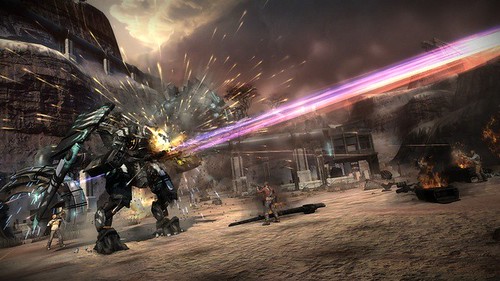 Starhawk is a modern reboot of original Warhawk, which was released back in 2007. It’s a typical third-person shooter with plenty of non-conventional weapons, explosives and vehicles, etc.

If you are new to the series, then there are chances that you may need some guidance to understand the basic gameplay elements.

To get you started, we have this short guide that will help you survive the battlefield specially when you are playing against other human players in multiplayer mode of the game.

It All Starts with the Rift Energy Bar
Whenever you spawn at your base, The Rift bar on the top corner of the screen will start filling up. This happens as long as you stay near the radiating green tower.

The Rift is more or less like the currency in Starhawk through which you can buy weapons, upgrades and build various structures, fortifications and turrets, etc.

So when you spawn, fill your Rift bar either right away or before leaving the base.

Don’t Deploy the Useless Structures
It’s important that you spend your Rift energy for the right cause. Planting additional turrets and fortifying the base are always better than supplementary garages, explosives and Hawk platforms. Sure, you need them but it does not my that you overflow them leaving your base vulnerable to enemy attack.

Starhawk’s Build and Battle System
In Starhawk (unlike its predecessor), instead of pre-built structures, you need to build them using the Rift energy. You can access the Build and Battle menu by pressing the “Triangle” button.

The radial menu will show you the energy needed to build different structures and also the number of structures that have already been built by your team.

For now, Starhawk only allows 32 structures per team. An essential check as people sometime go crazy when it comes to building various structures regardless of their need.

Identify your Role
Each player can have a role in the team depending on the gameplay style of different players. Some may like to use vehicles while others may want to use the sniper rifles. Whichever role you choose, you should try to fulfill its main objectives.

For example, if you are playing as a sniper, there is no need to collect extra Rift energy as your primary concern should be picking up enemies from distance. All you need to do is find some good stealthy spots and wait for the enemies to pass by your scope.