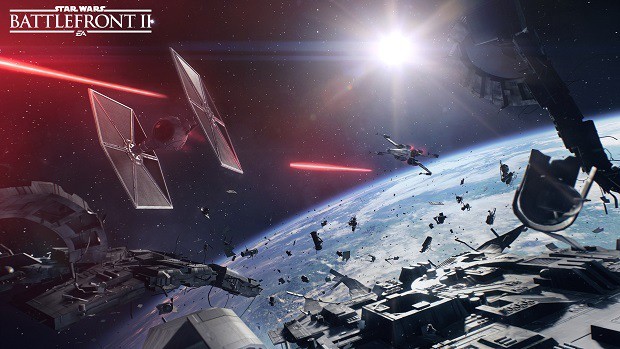 This Star Wars Battlefront 2 Beginners Guide gives you a basic overview of the game so that you can feel a little more comfortable as you start exploring all of the different game modes, characters, and weapons available in the game.

For more help on Star Wars Battlefront 2, you can refer to our How to Play as Rey Guide.

Battlefront has always been a unique series because of the universe that it is based on. Because of this, it can be quite hectic for new players to get accustomed to the ways that the game functions and all of the nuances that go along with the plethora of content that is available in the game.

Strike
The Strike is a small scaled infantry fight in which two teams of eight players each fight over objectives. One side has to protect an artifact while the other has to try and collect it before the reinforcements are depleted.

You have four classes available in the game but the assault rifle works best for this mode due to its automatic nature which makes it quite a bit more effective in close quarters than other weapons.

If you are plating on the resistance side in this mode, there are numerous locations across the map for a pass on valuable information about their whereabouts to your team.

You can also hide near the Artifact so that you can shoot any stormtrooper who tries to steal the package and make a quick getaway.

Arcade
Arcade mode is a retro mode which pits you against a number of AI and you have to defeat them as quickly as you possibly can.

The Darth Maul is by far the best character for this mode because it is much easier to clear the level with him than with anyone else.

Try to use the abilities as soon as they are ready to get as many abilities off in one level as possible.

Starfighter Assault
This is a 24 player game mode which puts the player in a large scale space battle. This game mode has a number of objectives attached to it.

It is probably best if you try and get accustomed to the way that a spacecraft handles in the game before you try to play the game mode, otherwise it will probably not be a very enjoyable experience.

Try to focus on the objective rather than other players and try to complete the orders as soon as you can for maximum success.

Galactic Assault
In this game mode, you and 39 other players go on to the streets to fight each other. The separatists attack and the clones defend.

Choosing the right class in this mode is paramount for a victory. The officer can be a good support role and the specialist class can be used to pick off targets at range.

The first thing that you will note is that as you play the game, you will collect battle points. These points are very important as they allow you to access a lot of unlockables in the game including heroes.

Keep an eye out on how many you earn and keep on looking at the shop to see how much more you need for your next preferred unlockable.

One other thing that you can do with your Battle Points is the ability to modify your weapons. This is a very good addition as it will allow you to customize the weapon to your liking and playstyle.

Try to understand how each and every class works. Knowledge is key in this game so it is best if you are aware of the strengths and weaknesses of each class, side, and hero.

Remember that in certain situations, hip-fire might be more effective than aiming down sight. One example of this is an extremely close quartered fight.

Heroes are much more effective but also require a greater degree of thinking.

They are also quite expensive so make sure that you try and stay alive for as long as possible if you are in control of a hero.

Keep a look out for Double or Triple XP days as they will allow you to level up multiple classes of your character rapidly.

In Battlefront 2, there are various different vehicles you will face on the battlefield. Many of them possess heavy firepower and also have high defense stats.

So, to have some ease, try to hit the vehicles at their weak points to destroy them more easily.

Complete different challenges and mini quests to earn Crystals or credits. These currencies allow you upgrade and purchase different cosmetic items for your squad.