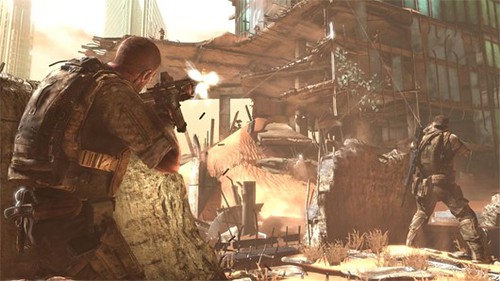 The exciting and story-driven warfare campaign of Spec Ops: The Line isn’t the only reason to play the game; its multiplayer is perhaps equally busy and exciting, pitting two teams in a tactical onslaught.

In this guide we’ll go over the basics of multiplayer, overviewing the Factions and their bonuses, classes, preferable load-outs and more.

There are two factions in the game which you must choose from. These are:

Both of the factions have their own unique bonuses.

However, a common mistake players often make in the start is making load-outs that would work better with one certain faction as compared to the other. This is not a good idea, as you are not guaranteed to be in the same faction every time. Therefore, make sure your load-outs have enough versatility to work well with both factions.

Now that that’s been cleared, let’s have a look at the factions individually:

The Exiles:
The following are the bonuses that you will get as a member of The Exiles faction:

The bonuses obviously tell a good bit of the story of The Exiles. Basically, this faction has the advantage of movement – the damage done is greatly reduced while zip-lining or using fast ropes. This can actually become very handy when you have to retreat or flee from a near-to-certain death situation.

The 10% bonus damage from pistols is also a pretty useful feature. Though it might not seem much, it can really stack well with powerful pistol weapons, such as the Desert Eagle or the .44 caliber Magnum.

And of course, who wouldn’t mind additional experience bonuses when you’re knifing your enemies down? The 15% bonus may not work for every class, but it certainly works for the stealthier players, and perhaps also the more tanky classes, which we’ll later discuss.

The Damned:
The following are the bonuses that you will get as a member of The Damned faction:

See that 70% reduction to falling damage bonus? This almost means you can fall all over the place without caring too much of dying! Well, no, it doesn’t mean that, but it definitely encourages a risk-filled gameplay, which is much more rewarding (both in-terms of fun and kills) in my opinion.

Combine that with the 10% XP bonus for sandstorm kills, and you can be walking source of death when the sands fly with the wind.

Additionally, the 5% weapon range effectiveness is quite good. 5% seems like ignorable stuff, but it actually gives your snipers just enough edge to have things tilt slightly your way – provided you have good snipers, of course.

So, if you want to summarize everything, then you’d do it in the following way:

As stated earlier, the Medic and Gunner classes are available at the start. The rest of the classes are unlocked as you progress onwards. Whenever a class is unlocked, a load-out is also unlocked as well. You can customize the load-out whichever way you like, including changing the class.

The classes in Spec Ops: The Line multiplayer are:

Don’t forget to share your tips and loadouts with us in the comments below!