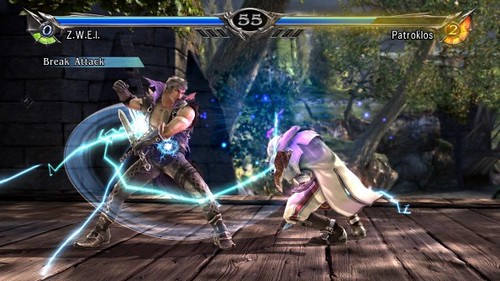 There’s a new wolf-man in town SoulCalibur folks, and for some odd reason he’s known only as Z.W.E.I. Don’t ask me what the heck the abbreviation is, because I don’t know.

And as if things were mysterious and strange enough with this six feet tall muscular man, his fighting style and gameplay is completely different and new from any other character in the game… hurray for the people wishing to learn him.

In this guide we’ll be going over the following things:

Description: No middle or surname, no knowledge of age, just Z.W.E.I. There’s little to write about this werewolf guy except his eerie method of playing. And yes, for the sake of simplicity, I’ll be ignoring a few punctuations and simply write ZWEI throughout this guide. ZWEI uses a unique sword as his main weapon – it’s no ordinary sword, as the picture would tell you.

But what sets him apart even more is the ridiculous range he gets from his other weapon, or should I say power; he can summon a whitish blue werewolf EIN to fight alongside him in battle, at times for just a single hit while others for entire combos.

Now, who’s the other new character that shares similar range and unique play-style traits like ZWEI? Exactly, it’s Viola, and both these two seem to be companions in the story mode.

Important Moves for Z.W.E.I
The following are some fairly important moves if you want to have a decent time beating up an enemy with ZWEI, and not the other way around. Keep in mind these are just the moves that have more priority in general than others.

Go to next page for a run-down of important moves/combos and general strategy tips.

On this page, you will find important moves/combos and general strategies to play with Z.W.E.I.

Aloft Revolver 3 A A

Bolt Driver B (while rising)

My recommendation for ZWEI players is to RUN when they see someone like Natsu in front of them. Well, okay, that’s not the best tip in the world, but really, ZWEI’s biggest issue is that his most damaging moves (which involve his pooch) are a little slow and very risky against fast players. A (hold) is good when it connects, but boy does it leave ZWEI vulnerable to attacks.

Additionally, he doesn’t have extremely long-range, which may be the first thing that comes to mind by looking at his stats. Don’t expect Viola styled range from this guy. What ZWEI does have going in favor for him is his attack rate and good range with his Critical Edge.

He’s not the fastest horizontal hitters in the game – so use those abilities only when you know you don’t have a lightning-fast player playing against you. You’ll be using verticals and 8-way run moves the most, though the latter should be used when you know you can risk it.

3 B is a pretty good vertical that will launch the enemy. If you can, 1 B (hold) as much as you can – it’s not much on its own, but the hold brings out EIN for an extra hit, which is never too bad in an ideal situation.

One of ZWEI’s key simultaneous press moves is 4 A+B that hits mid and will knock and enemy down. You can time it even better if you hold down the input and let it delay, though you shouldn’t really make a habit of doing that all the time.

B+K will release EIN for a quick mid hit and can be turned into a Brave Edge that hits at s-mid, and can be delayed further by holding the input.

In his 8-way run moves, all of them can play a vital role. But out of the lot 3 3 or 7 7 B is pretty cool and can be turned into a Brave Edge in which EIN will be summoned and do a 4 hit mid-mid-mid-high combo.

Summing everything up, ZWEI isn’t ultra-difficult to play with, but he isn’t simple either. What is less cool is that ZWEI has a lot of weaknesses that can be exploited by some of the faster and more stable characters like Pyrrha, Mitsurugi, Voldo, Natsu and many others that fall in the same tier.

Because of this, the community rates ZWEI as a low-tier character. Of course, that doesn’t mean he’s bad – it just means he’s not perfect; but then again, most characters aren’t.