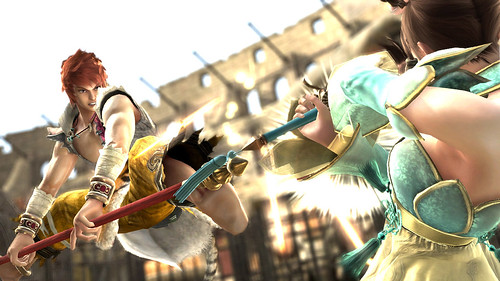 Who thought a boy with a stick would be so intimidating and merciless, that people would compare him to the revered Kilik. Well, at least Namco certainly did, since Xiba, another new kiddo in the SoulCalibur series, happens not only to be young, but also have a style that is freakishly similar to the stick weaving iconic character of the series.

If you are new to Soulcalibur series, you should first read our Beginner’s Guide.

In this guide I’ll be going over the following:

Description: Xiba – no surname, no middle name, just Xiba. This is a wandering boy who just happens to be oh-so-similar to Kilik, and because of that is the replacement for Kilik in SoulCalibur V. Not much is known about him, other than that he gets along with Maxi, Leixia and Natsu. Boring? Well, he is, until you actually try out the kid himself in battle.

Rising Monkey 3 B, K during hit A

The following are some of the more important and ‘must-know’ moves for all Xiba players:

Go to next page for the rest of recommended moves and general strategy tips to play Xiba.

3 B (hold to enter Remembrance stance)

General Tips for Playing as Xiba

The only trick with Xiba is to learn the combos and move lists, so you can execute them fluently in combat. Really, perhaps the only reason Xiba is slightly challenging to play with is his complex moves.

He is pretty much like Kilik, and because of that is one of the most brutal and effective characters in the game.

You can’t go wrong with Xiba once you learn and understand the important moves – that’s all there is to be good with him. Of course, I make it sound easier than it actually is, because you might get good with the kid, but you won’t be able to match the more experienced Kilik players.

Unlike other characters, Xiba excels at all kinds of attacks, be it horizontals, verticals, kicks or 8-way runs. 6 A is an important fast and high hitting move, which turns into a Brave Edge that does a great amount of damage. Also, use A A K wherever you can.

In verticals, 4 B is a powerful and long reaching move – I good weapon against shorter-ranged characters at the start of a round. 6 B K isn’t so special by itself, but as a Brave Edge it turns into a useful head-butt.

But where Xiba shines the most is with his brilliant Simultaneous presses and 8-way run attacks. He has plenty of ways to deal out damage.  A+B B K is a very decent three-way combo, and shines even more as a Brave Edge. Similarly, B+K while turning is great, and can dish out quite a bit of damage – try to execute it whenever you can.

When it comes to 8-way run attacks, 3 3 or 9 9 A, A does quite a bit of damage is a little hard to block. Again, its Brave Edge is quite brilliant that can deal 60 damage over four sweeps. 8 8 or 2 2 A, B is great if the enemy gets too close, as it knocks them back a good distance.

6 6 K, B will act as a Break Attack and has the same animation as B+K while turning. Finally there is 4 4 B+K, which is an Unblockable, and obviously has a slow animation. Use it whenever you feel the opponent can’t do much for a second or two.

Counter Characters For Xiba
Dude, this is Xiba, a younger version of Kilik. That means there are very few characters that can guarantee his demise everytime they play him. Of course, Natsu might really give Xiba something to think about, since she is probably one of the strongest characters in the game, but really, apart from that, I can only say that spamming counters with Ivy or perhaps Pyrrha could do the trick. Pyrrha is a great character against Xiba – provided he lets her get close enough.

But that doesn’t mean that unlike Natsu, Xiba barely has weaknesses or room for mistakes. His move set is rather difficult to learn, and faltering in their execution can really ruin it for you.