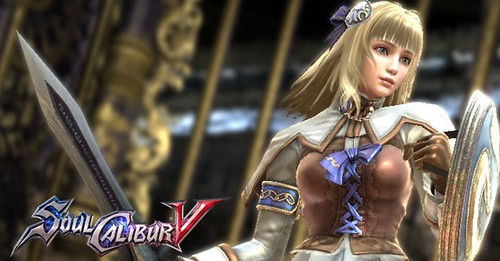 Pyrrha – she looks intimidatingly familiar. Those cute-ish looks, the sword and shield and the knight-like mini-skirt; there’s definitely something about her that makes her look viable, fast and lethal.

We heard about her way back in the original SoulCalibur, but this is the first time she makes an official playable appearance in the series.

She’s a combination of Sophitia and Cassandra, two ultra-speedy girls in the previous SoulCalibur games.

In this guide, we’ll be concentrating on Pyrrha and what she’s really capable of. To put it in detail, we’ll be going over the following:

If you are new to Soulcalibur V, read our beginner’s guide to get a hang of terminology and other basics.

Description: The daughter of Sophitia and Rothion and elder sister of Patroklos, Pyrrha adopts her late mother Sophitia’s and her aunt Cassandra’s fighting traits. But she’s not all glittery and gold.

Pyrrha has a dark side to herself – she believes that Tira is her friend, since she was kidnapped by her at a young age and raised by her. Furthermore, Pyrrha has an attraction to the Soul Edge, which transforms her into Pyrrha Omega.

Go to next page for recommended Pyrrha moves and general strategy tips.

On this page you will find the recommended moves for Pyrrha, general strategies and frame data.

Just looking at the move list might have given you an idea of how badass Pyrrha is. Instead of covering ‘essentials’ this time around, I’ve decided it’s best to give a go for the top 10 most important moves for Pyrrha – ones that you will be using often and dealing good amount of damage with.

In addition to these, I’d recommend the following 8-Way Run moves:

Pyrrha is easy to play with, very fast and quite hard to beat. Yes, those combos and some of the moves may seem a little difficult to pull off, but they’re really just all about reflexes and memory – Pyrrha will do the rest for you herself.

6 6 B is a very powerful attack, perhaps the most recommended attack out of the all because of its Brave Edge variant. Then there is 2 2 K which is also highly recommended.

But really, the Brave Edge of 6 6 B is extremely strong, doing a whopping 58 damage and serving as both a Break Attack and a super launcher – you know you’re screwed if you get hit by it.

If you do land it successfully, you should be happy with yourself, and you can follow it up with 2 2 or 8 8 B A K to make life even more miserable for the other player.

Other than that, there are plenty of easy moves of Pyrrha that can be learned straight away and are very effective and quick. Try to focus on verticals more – Pyrrha is a relatively vertical attack oriented character.

Oh boy, that’s a hard one. Pyrrha is undoubtedly a top tier character in SoulCalibur V, meaning she has very little going against her in-terms of sheer strength and ability. Perhaps she is weak to the same people Cassandra was.

Whenever playing against Sophitia or Cassandra, I always preferred someone who could either quickly catch them in their speedy moves or not let them get close at all.

So, for me, Ivy and Nightmare would definitely be a pick, though the latter character has changed drastically over the past few years. Top-tier characters like Cervantes (if you’ve unlocked him) and Natsu (especially Natsu) might offer her real trouble.

Otherwise, most other players will really have a hard time dealing with her. That is why I highly recommend Pyrrha for those new to the series. And for the veteran Sophitia/Cassandra players: well, let’s just say you guys are in for a real treat.