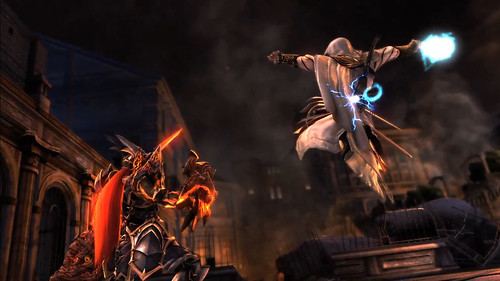 My fellow SoulCalibur players, do you know what time it is? Yes, you’ve guessed it, it’s time to learn all about the new and hot characters of SoulCalibur V, ranging from Patroklos and going all the way till Leixia and others.

For the fact that so many of the SoulCalibur players may also be Assassin’s Creed fans, I’ve decided to shed some light on none other than the bearded Ezio Auditore, whose young-self is present in the fighting game.

This isn’t the first time in the SoulCalibur series that we’ve seen such a brilliant guest personality make an appearance in the fighting game; earlier SoulCalibur games have had Link, Darth Vader, and so many other high-fi personality heroes and villains.

Note. Read our Soulcalibur V Beginner’s Guide if you are new to the series.

In this guide we’ll be covering the following:

Description: Full name Ezio Auditore da Firenze, which is really a mouth-full, Ezio was a Florentine nobleman in the Renaissance period and the leader of the Italian Assassins in the Assassin’s Creed series.

In SoulCalibur V, Ezio is Namco’s guest character, equipped with his signature weapons, like the hidden blade, short swords, and crossbow.

(For understanding the acronyms and terminologies, please refer to our SoulCalibur V beginner’s guide)

Important Moves To Keep in Mind:

The following moves are really the best way to start off with Ezio. Do note that these are the ‘essentials’ in combat, meaning you’ll be requiring their use a lot.

These important moves will be displayed in the following manner:

The Frame Data is (Impact Damage Guard Hit Counter-hit*), each data being separated by a space.

*Note: KND stands for Knock Down and STN for Stun

General Tips for Ezio Players
Ezio is a fairly easy and enjoyable character to play with. However, his ease of play sacrifices his general power. But most of all, like other characters in the game, Ezio’s biggest problem is his reach. Make sure to stay close to the bigger-reach players like Astaroth, Ivy and Nightmare.

The three important horizontals mentioned in the important move list are Ezio’s main arsenal. 6 A B B grounds the enemy, and 1 A is pretty standard low hitting stuff, but when countered it does a quick second hit.

Though Ezio’s horizontal attacks are the best utility and damage ones, in general his main focus is around vertical attacks. 6 B is quite rapid and hits high level. 1 B B B is a rapid three-hit combo and your most reliable vertical attack.

Ezio also has some really good 8-way run attacks. 6 6 A B is a useful forward run crossbow attack, and can be followed by a sidestep B attack like with most other crossbow attacks. Make sure to try and use the sidestep B additional attack whenever and wherever possible.

Counter-Characters for Ezio
It’s a bit too early to tell which character would work best against Ezio. However, it isn’t difficult to analyze and estimate which character in theory would do better against the Italian assassin. Ezio’s weakness is his fallibility to range.

So basically anyone like Nightmare, Ivy, Kilik, Viola and Astaroth might offer a threat to Ezio, provided he doesn’t get too close.

Additionally, Cervantes and Voldo have great potential to really give him a hard time, regardless of getting close or not, simply because of the speed and damage the two carry out.

If you have experienced playing with Ezio, and think there might be a character or two that gives you extreme trouble which hasn’t been mentioned here, feel free to share.