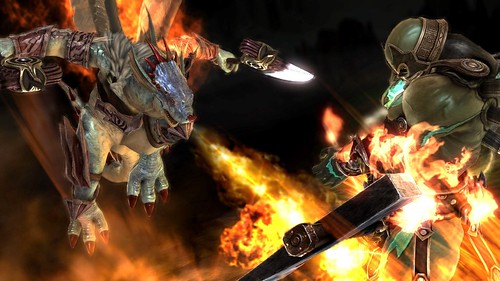 The well-known Lizardman or Aeon is not exactly a new character in the SoulCalibur series, but in SoulCalibur V he has a completely new method of playing because of changes to his gear.

Instead of his usual axe and shield combo, Lizard-boy is this time going all-out with a dual hand-axe setup, which means that he’s more aggressive and ‘theoretically’ deals out more damage.

In this guide we’ll be covering the following:

Description: A half man, half lizard, Aeon Calcos was once a man who went berserk with the Evil Seed, and was captured and subjected to brutal and immoral experimentations which created an unspeakable transformation in him.

Sadly, as time passes on, Aeon loses more of his human-self as time passes, though at night he can feel sensations and memories of being human, the morning always leads him back to the Abyss, and twists his mind further away from humanity.

The following are some of the more important or higher priority moves for Aeon:

A B (while rising)

B (while rising)
Go to next page for the rest of recommended moves and general strategy tips to play Aeon.

On this page you will find remaining recommended moves and general character strategy for Aeon.
Kicks:

General Tips and Tricks for playing as the Lizard

Aeon isn’t a very hard character to play with. What really matters it how he has changed. For many players, it is rather difficult to decide whether Aeon is very powerful or very vulnerable.

Actually, it’s a mixture of both. Aeon has some devastating attacks in SoulCalibur V, but at the same time he has quite a few weaknesses, because of which he is rated as a low tier character in the game.

That aside, Aeon has the edge of having deadly horizontals, verticals and simultaneous presses. His kicks are on the weak side, but he more than makes up for it otherwise.

When it comes to the horizontals, Aeon is packed with a lot of control effects; many of his essential horizontals knockdown enemies. 4 A is a very quick and effective short-ranged attack that puts the enemy on the floor.

However, the star horizontal attack is A B while rising, which does a whopping 46 damage over a high-mid combo. Similarly, the verticals are really good as well. B B B is really a standard combo that can be spammed quite a bit.

6 B isn’t that great normally, but it really deals out damage as a Brave Edge that has rapid six-hits and a launch, and can really hurt bad with 79 damage. 1 B is simple on its own too, but has a Break Attack when used as a Brave Edge.

Simultaneous Presses are Aeon’s strength. The simple B+K does a knockdown and a good amount of damage. 1 B+K is a threatening low Unblockable with a long setup, but does 84 damage.

Counter-Characters for Aeon
Aeon may have great power and decent speed, but he lacks range and attack rate. This really makes him look cornered and helpless in front of Ivy, which is perhaps one of the most annoying characters for Aeon. It’s very hard for Aeon to get close and stay in on Ivy.

Side-stepping her is quite difficult because of some of her attacks’ complexity, and staying close to her without losing health as Aeon is very difficult. Be careful when you face her, because she really knows how to work a lizard.